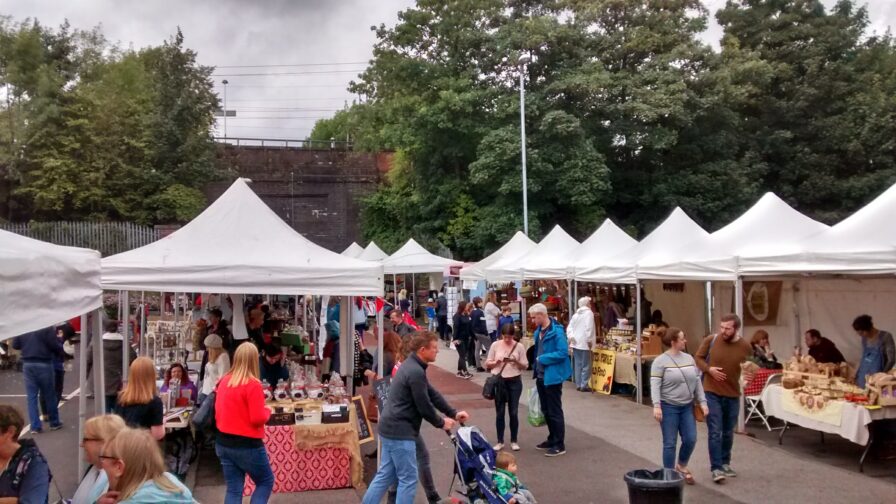 Manchester’s Levenshulme Market, rooted in the community, starts 2020 on a high with a national award for Best Small Outdoor Market.

Levenshulme Market are on the crest of a wave of success after being bestowed with the award for Best Small Outdoor Market at the Great British Market Awards 2020. This follows on from them being selected as a finalist for the BBC Food and Farming awards last year.

The awards are organised by the National Association of British Market Authorities, and were announced at a ceremony in Birmingham. Manager of Levenshulme Market, Richard Hirst, said:

“We’re incredibly proud to win this award. Markets are an important social space, not just for people to do their shopping and have a bite to eat, but for a community to come together and engage with one another… We could never have won without the efforts of our wonderful traders and the enthusiasm of our customers from Levenshulme and beyond.”

A judge of the Great British Market Awards commented on the reasons why the five-year-old Levenshulme Market won the award, saying it is a:

“Market run by the community itself. It has a huge impact on its area making environmental improvements to its trading site by improving verges, introducing planters, cycle racks and wall art.

“The directors engage with local organisations and schools about career plans and becoming independent traders. This is a market that has changed the dynamics of an area, and its environment, by creating a vibrant community hub. It represents a real team effort. All profits from the market go back to helping the market operate in a socially, environmentally and financially sustaining way. This is a social enterprise market.”

Established in 2013 as a Community Interest Company, Levenshulme Market operates every weekend from March to December, on the car parks behind Levenshulme train station. A special pop-up lunchtime food market also runs every Tuesday during term-time at The University of Manchester.

One of the biggest foodie events in the market’s calendar is its popular monthly night markets, which feature a host of Manchester’s best street food stalls, speciality bars, DJ entertainment and a party atmosphere.

The market currently on its winter break, will return on Saturday 7 March, 10-4pm.

You can find out more about Levenhulme Market on their website