Back on Track: empowering people to make positive changes to their lives 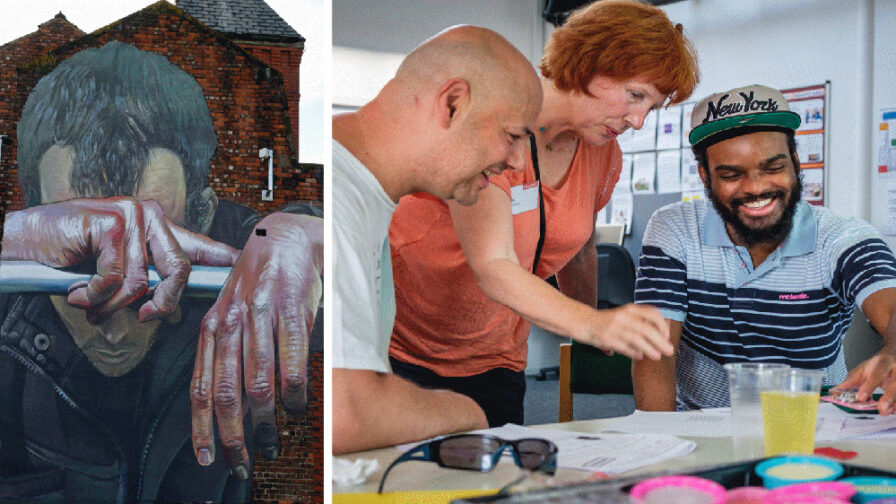 Public services have been slashed by the false economy of austerity. Back On Track is a charity in Manchester that provides a wide range of services for those most in need of help, that have been abandoned by the state.

Austerity has hit public services hard in Manchester and left vulnerable people unsupported. Many community groups and volunteers are stepping up to fill the void created by these funding cuts, that hit those most in need the hardest. Back on Track is one of these organisations.

Back on Track provides support to people in Manchester who may have been affected by homelessness, mental health, offending, or drugs and alcohol. Some have experienced all of these problems. Many are going through recovery or rehabilitation.

Their experiences have resulted in their life derailing. Back On Track helps the adults they work with to make lasting, positive changes in the direction of their lives.

An important part of this is the delivery of regular health and wellbeing projects that help to improve both physical and mental health, which promotes resilience to the knocks and setbacks that life can throw at us at the most inopportune times.

Wellbeing courses, outdoor gardening projects, and creative activities are provided at the learning centre in central Manchester. The centre also offers training courses, one to one guidance and work experience. Facilities include classrooms for learning, and a café for those attending courses to eat some healthy low-cost food. Chris Doyle, Fundraising and Communications Officer at Back on Track, says:

National charity NACRO, an advisory service for ex-offenders and those about to leave prison, set up in south Manchester in 1977.  Within a year the NACRO Education Centre was set up on Oxford Road and were were soon working with 500 ex-offenders each year.

In 1991 NACRO closed its education centres. Staff at the Manchester centre decided to set up a new charity to ensure that the education work in Manchester could continue. They called the new charity Nearis – Northern Education and Advice Resettlement Services and they moved into their new and current home – Swan Buildings, on Swan Street in Ancoats.

Today the building is famous for its mural, which was created in 2016 as part of the Cities of Hope street art project. It was inspired by their work supporting people with mental health problems and depicts one of the service users. After a service user’s suggestion the name was changed in 2009 to Back on Track to better reflect who they are and what they do.

Doyle spoke of austerities effects on the people of Manchester, saying:

“Unfortunately, huge local authority budget cuts have led to a reduction in services for the most vulnerable people in society. Many are falling through the cracks and need more support. We are yet to see how Brexit will impact on our services.”

Chris Doyle shared some statistics to illustrate that the work by Back on Track is needed more than ever:

Plus, Manchester has the third highest rate of rough sleeping (DLCG, Autumn 2018), with eighteen times as many people sleeping rough as in 2010 – there are now over 1,800 people in Manchester living on the streets or in temporary accommodation.”

Doyle went on to say:

“Half of the people we worked with last year had experienced homelessness.

“But that’s not all. Last year 74% of our clients were facing Severe and Multiple Disadvantage’s. This means they had experience of at least two of the following; homelessness, substance misuse and criminal justice systems. A recent study estimated around £19,000 is spent in one year on services for an individual facing severe multiple disadvantage, 4 – 5 times the average spent across the population. The average amount we spent on each of our 734 participants last year was £1,153. This offers a significant saving to public services.”

Back on Track receives a combination of funding from charitable trusts and the National Lottery, which provides the lion’s share of funding that allows them to provide adult education services.

They also receive income from Swan Kitchens which is their catering social enterprise. Opened in 2015, it is staffed by disadvantaged people getting the skills and experience they need to build a better future. They offer a range of sandwiches, salads, cakes, and more, and have options for gluten free, vegan, vegetarian and halal diets. All their food is prepared fresh on the day of delivery. Doyle adds, ”If there is something you want you don’t see on our menu, please get in touch and we will try to help!”

Since 2015 the kitchens have enabled over 100 volunteers from disadvantaged backgrounds to get crucial new skills and work experience, and has facilitated 46 people to secure paid work.

Doyle wants to develop the catering service to such a point where it completely finances all of the work they do and provide learning and work opportunities for many more people. “That might be a difficult thing to achieve, but it’s something worth aiming for” said Doyle.

“I’ve been working here for almost two years, and it’s regularly heart breaking to hear about the awful problems that people have experienced, often through no fault of their own. But it really is a privilege to work with everybody here, especially our service users who are working really hard to turn their lives around. End of term events are always special, where we help service users to celebrate their achievements. They are always emotional and heart-warming.”

Back on Track always need volunteers. They usually work with around 70 every year. Doyle commented that:

“We wouldn’t be able to achieve what we do without them…Every year we have to raise significant amounts of money just to keep providing the help that’s needed, and adapting to those changing needs.”

In the past 12 months, Back on Track have helped 117 people move on to work or further training and hundreds more have overcome problems and improved their confidence, skills and qualifications. They would like to help many more.

If you think that you could benefit from seeking help at Back on Track or would like to help out by donating or volunteering, contact them at:

Dale Anne McAulay, is a volunteer at Back on Track. She is a learning mentor and has helped out with a variety of courses since April 2018

This is article is part of the ‘Mancunians Going the Extra Mile to Help Those in Need’ series, focussing on the essential work charities are doing in Manchester.

Feature image and in article images (unless otherwise stated): Back On Track