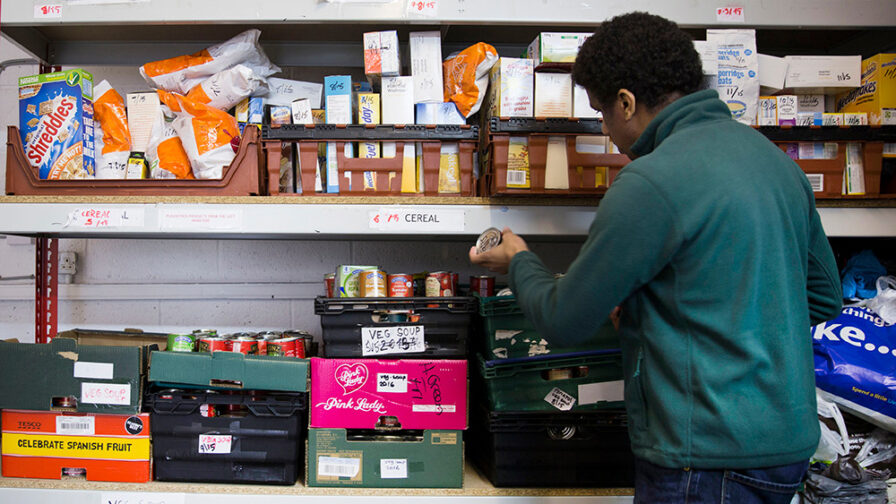 Social security payments, such as Universal Credit, are at an all time low, says report by IPPR think tank. Local campaign groups GM Poverty action and GM Unite Community comment on the situation.

IPPR offer solution of an emergency funding package that they calculate would benefit those in need more, and cost the public purse less, than Boris Johnson’s proposed National Insurance Contributions threshold hike.

Social security payments have hit their lowest level in real terms since the launch of the welfare state in 1948, while unprecedented levels of food bank use in Greater Manchester is recorded as families struggle to put food on the table.

According to a report by the Institute for Public Policy Research (IPPR) think-tank released on Monday, the current weekly allowance of £73 for Universal Credit (UC), is equivalent to 12.5% of median earnings. In 1948 when unemployment benefit, a forerunner to UC, was introduced claimants received payments worth 20% of the median wage.

As a result, the study stated, claimants are being “excluded from mainstream society, with the basic goods and amenities needed to survive let alone thrive increasingly out of their grip.”

The latest figures show that in July 2019 UC claimants across the country had risen to 2.3 million, with 760,000 (33%) of those in employment. The rise is primarily due to the staged rollout of UC across the country and is set to continue as more people are moved of legacy benefits such as Jobseeker’s Allowance.

The current state of social security reflects a culmination of a near decade-long restructuring of the benefits system by central government. The coalition government formed in 2010 oversaw a large increase in the number of benefit sanctions handed out. Sanctions against people claiming Employment and Support Allowance (ESA), a sickness benefit granted to those people with no or limited capability to work, rose to the highest level ever seen in 2013.

Poverty activists claim that placing all claimants in the same category has significantly worsened the situation for people who had previously been claiming these benefits.

“The system of assessment – which applies to claims for Personal Independence Payment, the old ESA benefit and now to those who present as being unable to work or having limited capability for work under Universal Credit – is contracted out to often completely discredited private companies and has resulted in appalling cases of people being judged fit for work when they are clearly not and [have been declared] less disabled than they clearly are,”

Evan Pritchard, chair of Greater Manchester Unite Community Branch (GMUCB), said in a statement to The Meteor. The GMUCB have regularly campaigned against the raft of changes to social security, initially implemented by the Conservative and Liberal Democrat coalition government, and last year published a UC survival guide. Pritchard went on to say:

“A large number of deaths can be attributed directly or indirectly to this system and there has been considerable pressure on the Government to provide the relevant statistics.”

The government has implemented a series of reforms to Universal Credit and other social security payments. In 2017, it introduced a controversial two-child limit to child benefit. Hardship payments are loans which claimants must pay back through automatic deductions in their monthly benefits payments which have also come under fire. A government report published last year stated that these advanced payments, intended to tide claimants over during the five-week wait for their first Universal Credit payment, were “trapping people in a downward spiral of debt and hardship.”

“We want to see an end to policies like the two-child limit on children’s benefits and for Universal Credit and tax credit payments to recoup the value that has been lost during the austerity years. Whilst central government has responsibility for these areas, we are calling for a policy debate in Greater Manchester about how we use the social security system to address poverty locally. This is about asking what we can do differently with existing social security powers, and what additional powers we might like to see devolved by central government in order for us to have more control over benefits locally.”

The IPPR report comes amidst news that more people in Greater Manchester are being forced to use food banks than ever before. Data from the Trussell Trust, a charity committed to reducing food bank use in the UK, shows April to September 2019 was one of the busiest six-month periods for food banks in the Trussell Trust’s network since the charity opened.

Between April and September 2019, the charity gave 41,439 three-day emergency food supplies to people in crisis in Greater Manchester; 16,133 of these went to children. In May, The Meteor reported that another surplus food redistribution charity, Fareshare Manchester, dished up over 3 million meals in and around Greater Manchester in 2018 to people in need, an increase of 50% over the previous year.

With the General Election looming, the Trussell Trust has called for politicians of all parties to pledge to protect people in Greater Manchester from hunger by ensuring everyone has enough money for the basics. The charity says this could be done by ending the five week wait for payments and ensuring that Universal Credit covers the cost of living.

Labour has already pledged to scrap Universal Credit, which it branded “inhumane”, and has promised a £3bn emergency bailout of the system in the short term.

Earlier this month the Conservative government responded by announcing an end to the benefits freeze next April and increasing universal credit payments by 1.7%, in line with inflation. Boris Johnson yesterday also announced a plan to raise the threshold at which people start paying National Insurance contributions to £9,500, which he wrongly stated would put “£500 into the pockets of everybody”. The actual figure people would benefit by would be £100. The government’s proposal eventually plans to raise the N.I. threshold to £12,500, but have not stated a timescale for that.

The IPPR are suggesting that an £8.4 billion a year emergency funding package is needed to alleviate the social “security deficit” caused by years of austerity. The think tank estimates that implementation of this package would raise average incomes by 4.8 per cent for households in the bottom half of the income distribution.

In contrast to this IPPR calculate that just raising the  N.I. threshold to£12,500 will mainly benefit the well off and only increase incomes by 1.2% for the bottom half of housholds. The IPPR predict their proposed emergency package would cost the public purse less than the governments proposed raise of the N.I. threshold.

“Social security should offer a safety net, not a tightrope over poverty. We call on political parties to commit to reversing the impact of the benefits freeze and allowing those in-work to keep more of their earnings…

“It is remarkable that in post-war Britain the support for those living in poverty was closer to average earnings than it is today. This is the very simple fact that lies behind the record levels of personal debt, rising use of food banks and increasing destitution that we see in the UK.”