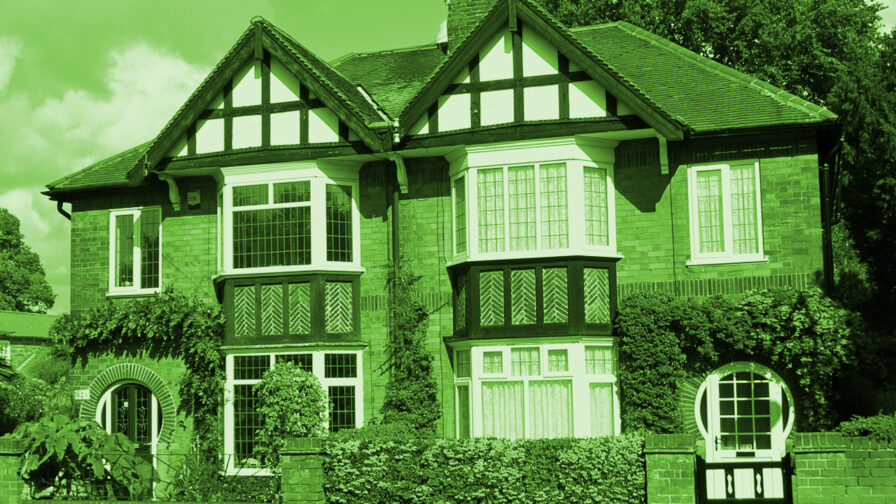 Jonathan Atkinson from Greater Manchester’s Carbon Co-op, looks at the key issues concerning the Green New Deal and the multiple beneficial outcomes that could be brought about by its implementation. People wanting to learn more about the Green New Deal can do so at a free event this Friday at the Friends Meeting House in Manchester, full details at the end:

As the case for radical action on climate change grows ever stronger, Alexandria Ocasio-Cortez, Ed Markey and others within the progressive wing of the Democratic Party are advocating a Green New Deal for the United States. Inspired by its scale of ambition many are now advocating for a similar approach in the UK.

What might a Green New Deal mean for a housing sector widely acknowledged as being in crisis, how might it help improve housing for the most vulnerable whilst meeting the challenge of climate change and how do we avoid the past disasters of state-led energy efficiency programmes?

It may seem that the Green New Deal is an idea imported from the United States, but in fact it began life as a report authored in the aftermath of the 2009 global economic crisis by a group of radical economists, thinkers and politicians including Ann Petifor, Andrew Simms, Caroline Lucas and Richard Murphy.

The report advocated a radical response to intertwined economic and climate crises, combining quantitative easing, large scale investment in green infrastructure, a robust plan for green jobs and a re-evaluation of how we define ‘economic good’. The most striking aspect of the report was its scale of ambition, suggesting nothing less than a radical reconfiguring of the UK’s economy, governance and financial systems. Though well received the report inevitably failed to gain traction at a time of a coalition government implementing an ideologically motivated austerity programme.

Spin forward ten years and the rising progressive wing of the Democratic Party found inspiration in the core ideas of the Green New Deal plan, re-evaluated in a context of increasingly common climate disasters, calls for a just transition away from hydro-carbon jobs and a newly energised black activist movement emerging in opposition to the Trump administration.

Multiple potential benefits for many

Compellingly the Green New Deal brings together sometimes disparate progressive agendas under a single policy. For environmentalists, it offers the large scale mobilisation of resources necessary to radically decarbonise our existing infrastructure, using state debt to invest in new renewable generation, green industrial processes and housing retrofit. For trade unions concerned about job losses from old industrial sectors, it promises investment in training and the creation of new, well paid and secure jobs. For civil society and advocacy groups concerned about the social impact of new policies, it offers ‘energy justice’ and a rebalancing of society to protect the most vulnerable, redistributing wealth through a progressive tax agenda.

Now politicians, trade unions and activists are seeking to launch the Green New Deal with Caroline Lucas and Clive Lewis launching a Private Members Bill to legislate for the policy. Labour’s business minister Rebecca Long Bailey has spoken in favour of a Green New Deal and Labour is pushing the agenda forward.

A Green New Deal for Housing

We know that addressing home energy use is a key element of any meaningful climate change policy, and after years of Government inaction on the topic, a Green New Deal is hugely welcomed. It offers exactly the radical thinking and large scale investment necessary to transform our housing stock.

Whilst much effort will go in to building new, low or even ‘zero carbon’ homes (NB the term zero carbon hides a multitudes of complex debates!) the majority of focus for the Green New Deal will be on creating a viable plan for retrofitting the 25 million homes currently standing in the UK.

In the private sector, state-backed programmes, similar to KfW in Germany, will be needed, with subsidised householder lending. In the social sector, the good work already done needs to be built on with effective mechanisms for housing association borrowing and collectivised works. And in the private sector, landlords need carrots in the form of preferential lending and regulatory sticks in terms of enforcement of poor performing homes.

New community or municipal scale roll out mechanisms need to be developed, with street or area based approaches necessary to deliver millions of home retrofits each year. And to support this we need a well paid, appropriately skilled workforce with ‘fit-for-purpose’ quality assurance frameworks.

It may sound simple, but it’s not and we need look no further than the past few years, when energy efficiency improvement schemes were relatively more common, to see the pitfalls.

These schemes were often delivered by large construction companies such as Carillion, subcontracting local staff whilst offering poor conditions, wages and training. This form of procurement led to a ‘race to the bottom’ in terms of costs and quality, and as the example of Carillion shows, was ultimately unsustainable for all involved.

At Grenfell Tower, a similar culture of outsourcing and procurement led to disaster. The surrounding areas are now heavily polluted by the residue of the burnt insulation materials, demonstrating the poisonous nature of the building materials used. Increasingly evidence suggests that even in normal circumstances, such materials don’t sit inertly within homes but effect the long term health of residents.

Too often it has been the most vulnerable residents in the least well off communities who have suffered the consequences of work done in the name of ‘energy efficiency’ and low carbon homes. But we know that housing retrofit doesn’t need to be done like this.

Carbon Co-op and other have demonstrated that deep, whole house retrofit can be achieved at relatively affordable costs, using skilled, local professionals and natural, sustainable materials such as wood fibre insulation that don’t poison householders or the environment.

Only the state can mobilise resources at the speed and scale necessary to decarbonise to the extent required to meet the challenge of climate change.

But the state has a poor track record of empowering citizens and communities and, at least in recent history, of being able to procure safe, high quality projects at good value.

The Green New Deal has the potential to transform homes and communities, but to truly transform society it needs to incorporate and involve citizens in its delivery mechanisms, to take a holistic, localised and progressive approach to procurement and to recognise the wider sustainability and toxicity of the materials used in its delivery.

We will be discussing these issues at an event at the Friends Meeting House in Manchester from 7pm on Friday 26th April 2019 (preceded by the Carbon Co-op AGM from 6pm-7pm). We will be hearing from radical architect Tom Woolley, campaigner Rowan Mataram of Platform, and practitioners Aneaka Kellay and Ben Aylott of Carbon Co-op. There will be an opportunity for discussion and to make plans for how a Green New Deal can be developed in Manchester.

Read: Can alternative models of ownership alleviate the housing crisis?