Shake off your digital chains: choose software that liberates you 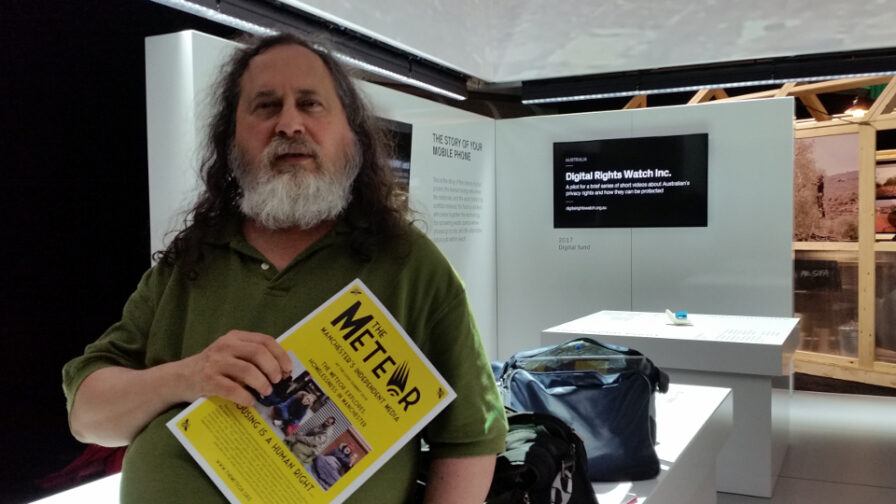 The Facebook/Cambridge Analytica scandal has shown the danger of putting our data and trust in platforms running proprietary software. Richard Stallman thinks the solution is free software. Software that liberates people. First in a series of stories reporting on the Lush Summit 2018.

Our lives are becoming increasingly enmeshed with and dependent on digital software, from Google’s search engine while we work, to Facebook’s social site while we play (often when we should be working). Software is ubiquitous in modern life, and despite often coming with no perceivable upfront expense, it may be costing us dear in freedom and independence by the way it steers and shapes our lives. Is this software giving an impression of expanding our horizons while it is actually shrinking them?

Richard Stallman is an American free software movement activist and programmer who sees the copyrighted software owned by IT giants, such as Microsoft’s Windows, as a pernicious controlling force in society.  The inability to see what is encoded in copyrighted proprietary software, and its ability to undertake actions and to collect and disseminate data from you without your knowledge, Stallman sees as the wielding of unjust power over the software user by the software supplier, reducing the software users’ liberty.

So in the 80s, Stallman decided to do something about this by creating his own free software for operating computers, he explained to The Meteor at the Lush Summit 2018:

“I started the GNU project in September 1983. I published the statement that I was going to develop a free software operating system so that users of computers could be free.”

While working on the GNU operating system Stallman set up the Free Software Movement (FSM), of which he is president, to codify what Free Software actually is.  ‘Free’ doesn’t refer to software you don’t have to pay for, it refers to the freedom it offers to its users. In order to be considered free software the program must exhibit the four essential freedoms:

0: Run It – the freedom to run it as you wish for whatever purpose.

1: Change It – the freedom to study the source code of the program and change it so it does the computing you want it to do. Source code is often unintelligible in proprietary software due to it being translated into executable code (strings of binary digits) which is extremely difficult to understand or change.

2: Redistribute It – the freedom to make and redistribute exact copies, to give away or sell as you wish.

3: Redistribute With Changes – the freedom to modify the program, make copies and then distribute them as you wish.

The first two freedoms allow individual control, but that is not enough if say the user is not a programmer and can’t understand the source code to change it. So Freedoms two and three allow collective control, where groups of users (programmers and non-programmers) can work together to adapt the program to their needs. Stallman contends that:

“If you do have these freedoms then it’s free software and users control the program. But if any of those freedoms are missing, the users don’t control the program; instead the program controls the user and the developer controls the program. So, that means this program is an instrument of unjust power.”
This unjust power can involve the software spying on the user, tracking the user (both physically and virtually on the web), restricting a user’s actions, for example search engines in China blocking certain terms such as ‘Tiananmen Square’ or ‘Tank Man”.

During his talk at the Lush Summit Stallman recollects an abuse of power by Amazon and its software that would have put a smile on Big Brother’s face. In July 2009 Amazon, without warning, remotely deleted digital copies of George Orwell’s dystopian masterpiece 1984 from the Kindles of readers who had legitimately purchased them. An act that surely would have made a ghostly Orwell shake his head and say “I told you so”.

Microsoft comes under particular criticism from Stallman for its use of the universal backdoor to update its Windows operating system, and for bugs within its operating system that the National Security Agency of the USA used to “attack people’s computers”.

Due to the power the vast majority of proprietary software exerts over its users, Stallman refers to it as “proprietary malware” and “software for suckers”, and says greed is the primary motivation for certain IT companies: they abuse their users for profit.

The latest scandal over the Facebook data breach shows that this unjust power not only abuses individuals’ data, but may also be undermining democratic society as a whole. Data from over 50 million Facebook users in the US was supplied to a company called Cambridge Analytica, which used the information in targeted political advertising prior to the last US presidential election – which saw Donald Trump become president. Stallman said, in The Guardian, of the controversy:

“There is a limit on the level of surveillance that democracy can co-exist with, and we’re far above that… We suffer more surveillance than the inhabitants of the Soviet Union, and we need to push it way down.

“Any database of personal data will be misused, if a misuse can be imagined by humans. It can be misused by the organisation that collects the data. In many cases, the purpose of collecting it is to misuse it, as in the case of Facebook, but also in the case of Amazon, Google to some extent… it can be taken by the state and misused.”

During the Lush Summit 2018 when Stallman was asked how the Free Software Movement could compete with IT giants such as Microsoft, Apple, Facebook and Google, he replied.“Well we have done pretty well so far, in fact those companies use GNU/Linux a lot in their servers”.

This highlights the problems facing free software’s growth and establishment. Although the use of GNU/Linux is widespread, many programs using it do not exhibit the four essential freedoms, due to being modified with additional proprietary components which are non-free and written in executable code. To identify which of these free distributions (AKA distros) of GNU/Linux comply with the four essential freedoms, the FSM website (www.gnu.org) lists all complying free distros and also those that don’t hold to the spirit of free software.

To prevent software developers/companies taking free software code and altering it to become proprietary software, Stallman developed the concept of Copyleft. Copyleft subverts the copyright
legal instrument which generally takes away users’ freedoms and gives power to the proprietor. To Copyleft a program it is put under copyright and then distribution terms are added ensuring the four essential freedoms are kept in any distributions of that code or any program derived from it. Stallman says:

“The principle ethical question for a collection of software is: does it all respect your freedom, is there any non-freedom respecting piece in there? Because if there is then for your freedom’s sake you should not use it, it is not wise.”

To support the Free Software Movement, based in the USA, Stallman asks people to sign up wherever they live because “free software helps people all around the world.” He wants people to start using free software programs such as the browser GNU IceCat, developed by the GNU project, based on the Mozilla Firefox web browser. Also recommended is LibreOffice (libre means ‘liberty’ in Spanish), which is the free software version of Microsoft Office, and the program used to write this article.

Feature Image: The Meteor (Richard Stallman at the Lush Summit 2018)