Save the Salford Star CD released

By Guest Writer | 4 October 2018Friends of The Meteor 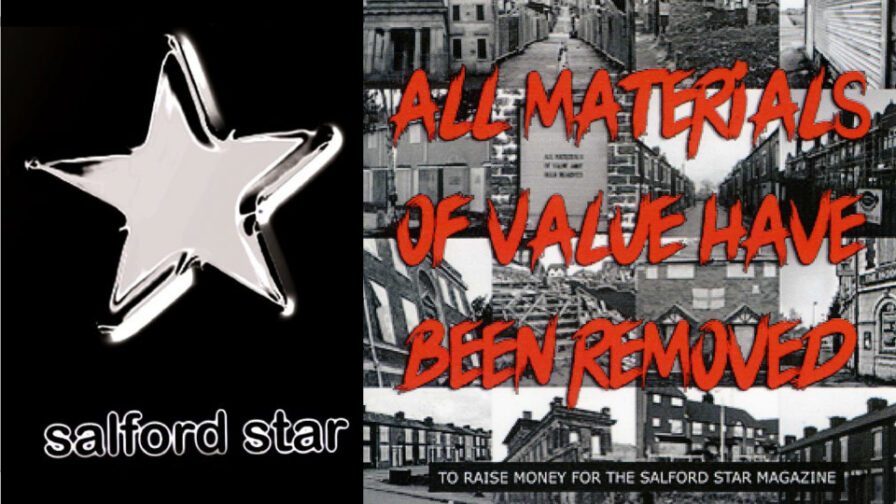 After 13 years and over 5,000 articles, the Salford Star is in danger of closing for good, as the company will run out of money at the end of November. The Salford Star gets no funding and only exists thanks to donations from readers.

Now, the Sounds of Salford radio, which began with a feature on the Salford Star during its first broadcast and has now itself shut, is ending its existence by releasing a benefit CD with all proceeds going towards helping the Star survive.

Fittingly, 13 top bands and singers from Salford and Greater Manchester have donated tracks (one for each year of the Star’s life), and it’s also fittingly titled All Materials of Value Have Been Removed, after the stencils Salford City Council spray onto tinned up houses awaiting demolition.

Produced by the Sounds of Salford’s Simon Williams, and re-mastered by Paul Travis at A1(M) Records, the compilation has a delicatessen of superb tracks with social justice running through their core, and something for everyone, from catchy rock and punk, to indie, soul and dance by musicians of all ages, with the youngest just 16.

The full track line-up is…

Track 1: The Moods – Profit Over People
One of the country’s most happening bands and winner of the Salford Star Band of the Year, this track soars with anger as dance rap cuts through and tells it as it is…’Live free or die by the rules/Everybody is being taken for a fool…’

Track 2: The Things – 1,000 Stars
Shimmering big soundtrack with a tinge of psychedelia from a band that made its name playing the Russell Club in the late Seventies and being lauded by John Peel in the Eighties. Age has not withered them as the sound quivers with stardust.

Track 4: Chris Flynn – Anita
Beautifully crafted track by one of Salford’s top singer songwriters, as a girl living the hard times, high rise life longs to escape to a better place. And does. Melancholia a go-go and stunning in its sonic simplicity and emotional complexity.

Track 6: The Void – Never Die
Incredibly mature indie-pop from incredibly young Manc band with a nice line in gutsy guitars and seducing vocals that lead where the ‘grass is greener than we know’. You’ll think you’ve heard it before. It’s that ear huggingly good…

Track 8: Shannon Donnelly – Old Skool
OMG! Frightening talent alert…Shannon is 16, and created the tune, produced the backing, wrote the retro-pining ‘kick it like the old skool’ lyrics…oh, and sings like a weathered troubadour on this toe tapping, immaculate slice of artistry.

Track 9: Leah Fisher – My Escape
Another scary talent, with Leah turning her psyche inside out to a stripped down sparse Latin rhythm that allows her voice to come through, clean and clear and uber distinctive…’This is how it is…my song is my only escape from it all’…

Track 10: The Sandells – A Matter of Time
Salford ‘krautpunk’, that’s driving to ‘God’s garden’ where ‘it always rains’, complete with steaming guitars, pounding drums and a few screams and fat cats en route…

Track 11: Fast Cars – The Kids Just Wanna Dance (Live In Japan)
‘Do you like dancing?…Let’s go d-a-a-a-a-ncin’!’ in a punk, powerpop kinda way, as the Cars signature tune comes live and jiving from the land of the rising fun.

Track 12: Cinnamon Dinner – So-Called Revolution
Salford’s indie heroes bring it home with a kicking catchy damnation of everything… ‘We were promised a world full of perfection/Ever since we were known all we got was rejection…We’re the children of the so-called revolution…’

It’s also available for £5 from Deli Lame cafe on Bexley Square or via any of the Salford Star contributors.

Listen to a Sound Cloud preview of the album click here – and if you like it donate!

The Salford Star would like to thank Simon Williams for commissioning and putting together the CD, Paul Travis at A1 (M) Records for re-mastering the tracks, Buckers for doing the CD cover, Dusk Till Dawn Studios that released four tracks from its incredible stable, and all the bands and singers who have contributed some fantastic tunes. With your help the Star will continue a little longer…

First published in The Salford Star on 1 October 2018