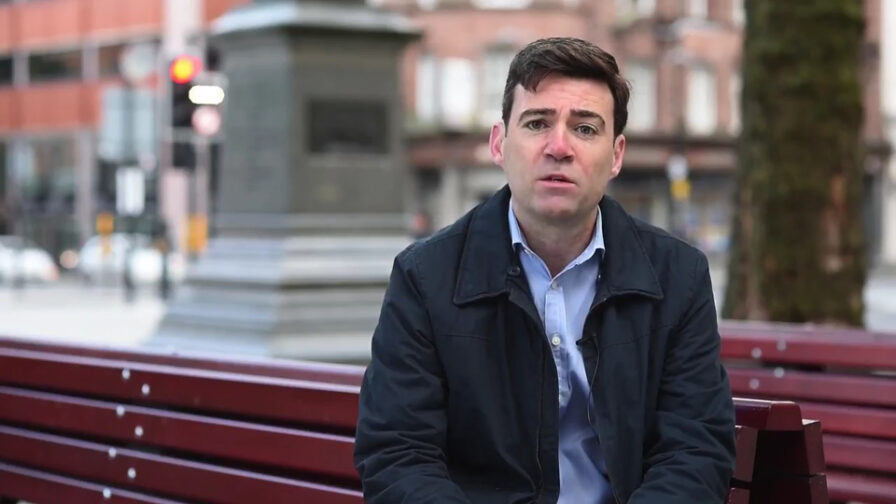 Mayor Andy Burnham yesterday described the 42% increase in rough sleeping across Greater Manchester between 2016 to 2017 as a “humanitarian crisis”. The increase was revealed in the official rough sleeping statistics for England released by the Ministry of Housing Communities & Local Government. Burnham criticised a number of central government policies, which he blames for the growing homelessness crisis, during a visit to the youth homeless charity Centrepoint in Manchester and also laid out developments in his battle to end rough sleeping in Greater Manchester by 2020.

For those that regularly walk through Manchester City Centre it may come as no surprise that rough sleeping also increased by 21% across the city, from a count of 78 in 2016 to 94 in 2017; with a 13-fold increase being recorded since 2010. Both Manchester and Greater Manchester saw greater percentage increases than the 15% rise recorded across England; where numbers rose from 4,134 in 2016 to 4,751 in 2017.

Burnham said he thought the figures underestimate the problem to a significant degree, and this is a view widely held by organisations dealing with homelessness. The rough sleeping figures are based on a snapshot count of one night in autumn, in specific areas in the local authority where it is known that homeless people bed down. Data collected in Manchester on the Severe Weather Emergency Protocol, where a local authority is obliged to house rough sleepers due to freezing weather, suggests the actual number of rough sleepers could be around four times higher than the official count.

Balbir Chatrick, Director of Policy and Communication at Centrepoint, also doubts the validity of the rough sleeping count, saying:

“These figures are shocking but they only attempt to count the number of people sleeping on one night. We know there are thousands of more young people who are hidden homeless- sofa-surfing for months on end, sleeping on public transport, or staying with a stranger just to find a bed for the night.”

Chatrick was delighted to meet with Burnham and discuss their mutual endeavour to reduce homelessness and the worrying rise in rough sleepers. She was particularly pleased that Burnham spent time chatting with young service users at Centrepoint.

One of those Burnham spoke to was Joshua Ennis who described his experience of being a young homeless person in Manchester. Ennis become homeless after a breakdown in family relationships and falling seriously ill. After his release from hospital, when Ennis was sleeping on the streets, Centrepoint helped him to get accommodation in hostels and eventually his own secure tenancy. Now Joshua is a project worker at Centrepoint in Manchester, using his lived experience to help other young homeless people find a life away from the streets.

After speaking to Ennis, Burnham described the current homeless situation as:

“…a humanitarian crisis that is unfolding before our eyes… people are really suffering, even dying on our streets…we are going to do everything we can here, but it is time the whole country woke up to [the fact] that it is not right that young people are in this position. It’s not right that people are leaving care and going straight on to the streets; we can do better than this in 2018.”

Despite the bad news of rising numbers of rough sleepers, the mayor remains confident that his pledge of ending rough sleeping in GM is still achievable, even with the national government policy he says is increasing homelessness:

“…my message goes to the government: look at what you have done by taking housing benefit off 18-21 year olds; that is adding to the problem. Look at what you are doing with introducing Universal Credit; that is adding to the problem. It’s time for them to ask some hard questions of themselves, because they can’t leave us here to pick up all the pieces… it’s time for a much bigger national debate about what we as a society are going to do to ensure every person has a roof over their head every night. In my view that is a basic human right…”

Burnham revealed that it is the pulling together by the people and organisations of GM to battle homelessness that gives him the confidence that rough sleeping can be ended by 2020. And he described a unique model of public, private, voluntary and faith organisations working together to enable the next phase of the battle against homelessness.

“These new figures show that Manchester, like all cities, is facing a growing challenge. But while the figures are getting worse our response is getting better”

The visit to Centrepoint was also used by Burnham to outline some of the achievements already claimed by the Mayor’s office:

Also announced during the visit to Centrepoint was a new business network that will make it easier for GM businesses to contribute to the citywide campaign to end rough sleeping, as well as new funding of £7 million over the next three years to extend the Housing First program (where entrenched rough sleepers are given a secure tenancy with wrap-around support) to accommodate up to 500 individuals. The £7 million is Manchester’s share of the £28 million promised during the Autumn Budget 2017 to finance Housing First pilots across the UK, although one Housing First pilot has already been running in Manchester since April 2016.

“£7 million in new funding from government is a welcome contribution but we need to keep a sense of perspective on the government’s contribution to Greater Manchester’s homelessness problem.

“Many local councils across GM will likely be cutting £7 million or more worth of services from their budgets this year. In Salford, we have lost £186 million from our budget since 2010 with a further £11.2 million to cut this year, with more government cuts to local council budgets planned for future years.”

“If the Government is serious about breaking the cycle of homelessness it must start by measuring the problem properly and then providing adequate funding to solve it.”