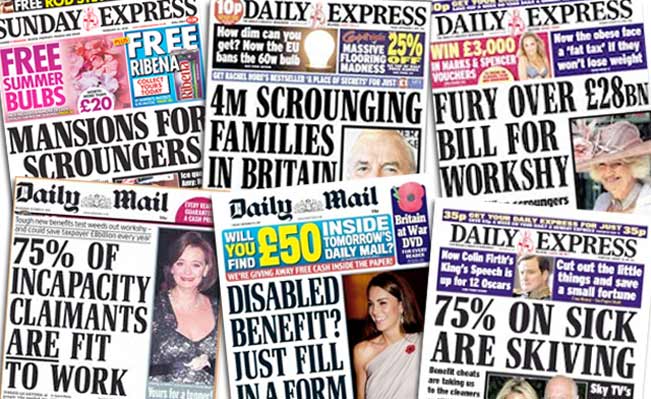 Demonisation of the poor is rife in the media. They are blamed for society’s ills, providing scapegoats which distract the public from criticising ineffective governmental policy that is ultimately responsible.

Media organisations abuse their power, using headlines filled with bile, branding the often vulnerable groups in poverty as work-shy scroungers. While television programmes like Benefits Street and On Benefits And Proud portray those in poverty as one dimensional stereotypical caricatures, and provide no insight into the vagaries and inequities of life, health and society that contribute to a person needing to claim benefits.

Rachel Broady the NUJ Manchester and Salford branch equality officer, who appears in the film and lives in Manchester, says that due to bad reporting on poverty:

“There are good stories out there to be told that are missing…The film asks media workers to consider how they tackle the subject to think more about the roots and causes of poverty and the reasons people find themselves dependent on benefits.”

Some of the young filmmakers, aged 16-24, from The Reporters’ Academy in Salford had themselves experienced low pay, reliance on benefits and homelessness. This lived experience helped them understand and challenge the misconceptions and stereotypes of poverty during the making of the film. During production the young reporters conducted interviews with those affected by poverty, constructed a draft plan of the film, and received training in editing and using media equipment.

One of the young film makers said on the NUJ website:

“It was great to produce a film about a subject that not only affects my own community but every community in this country. It’s not often that a story can be of interest and value to almost everyone.”

“It was important my interview questions were pitched correctly. I didn’t want the viewer to feel sorry for the interviewee but to understand that this is their life, day in, day out.”

The young reporters used the NUJ reporting poverty guidelines in producing the film. The guidelines were produced, in collaboration with Church Action on Poverty, to help journalists report fairly and accurately stories involving poverty. The guidelines place emphasis on reporting on poverty from the viewpoint of those in poverty, as they are the experts.

Stories of unemployment, child poverty, parenting and seeking refuge in the UK are portrayed in the film. These are all prevalent issues in Salford, where the film was made, which is ranked as the 22nd most deprived local authority in England and has 23% of children living in poverty. The not for profit Reporters’ Academy’s co-founding Director, Glyn McGuire, explained how this production was a new challenge for them:

“We’ve done community stories before but we’ve never delved into an issue that affects such a vast number of people. I think it’s been one of the most challenging films we’ve ever done, which is great.”

Rachel Broady has been instrumental in producing and promoting the reporting poverty guidelines. She will also be advocating their utilisation in a separate guide to tackling the negative stereotypes of social housing tenants. ‘Fair Press for Tenants’ is a meeting being held to discuss this guide in Salford on the 14 September 2017, organised by the Benefit to Society Campaign.

The Meteor is committed to using the NUJ Guide to Reporting Poverty in all stories involving poverty that we cover. Which will be many, until we see a change in direction in social and economic policies at both a national and local government scale.

NUJ Guide to Reporting Poverty can be downloaded by clicking here