Engels: the journey home (part one) 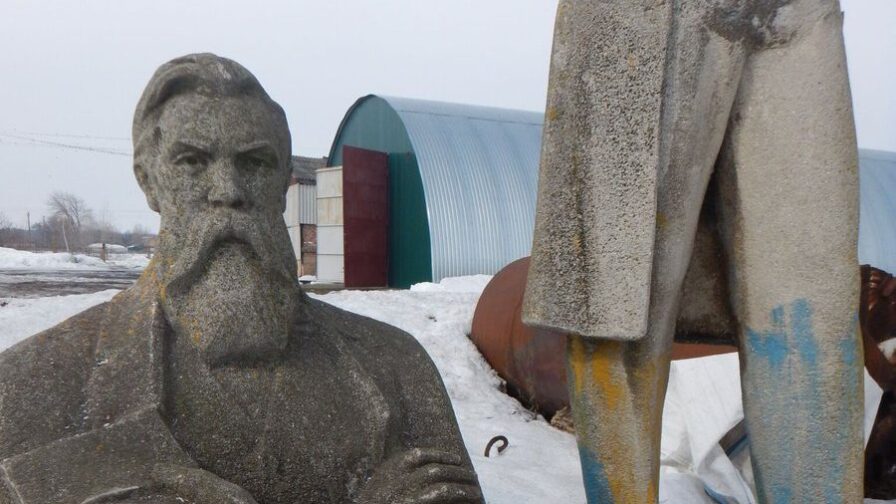 “A spectre is haunting Europe – the spectre of communism”.

So begins The Communist Manifesto. The spirit of its authors, the political philosophers Karl Marx and Friedrich Engels, can still be found in Manchester, the radical city that inspired them.

Nearly 170 years after the book’s publication and exactly 100 years after the Russian Revolution, which it inspired, that spirit is given solid form. A statue of Engels is being transported from Ukraine in the former Soviet Union and permanently erected in Tony Wilson Place, near the Home arts complex.

The statue’s journey has been filmed by Turner Prize nominated artist Phil Collins for Ceremony, the closing event of this year’s Manchester International Festival. Collins will mix live footage of the statue’s inauguration with film of the journey as it passes through places significant to Engels, including his birthplace in Wuppertal and Berlin, where Runcorn-born Collins now lives. There will be stories from modern Manchester workers collected by Collins during a year-long MIF residency. The event will be sound tracked by Mica Levi and Demdike Stare and feature a new anthem by film composer and Super Furry Animal, Gruff Rhys.

The two-tonne, 3.5-metre tall concrete statue was made in 1970 by an uncredited sculptor. It had been placed at a crossroads in a small village in the Ukraine, which at that time was still very much part of the Soviet Union. By the time Collins tracked the statue down, it had been removed to an agricultural compound and, like the Soviet Union itself, had been dismantled. Old raffia sacks hid and protected the sculpture. Part of it had been daubed with paint – the blue and yellow of the Ukrainian flag, adopted after independence in 1991.

Many Ukrainians see their country’s time in the Soviet Republic as a Russian occupation. And there was no more prolific symbol of occupation than the statues of communist heroes. There were 5,500 statues of Lenin alone in the Ukraine, two-thirds of the total in the whole of the Soviet Union. Protesters for independence toppled a number of these in iconoclastic public performances, like those that would be seen after the overthrow of Iraq’s Saddam Hussein in 2003.

More Ukrainian statues fell, after the Euromaiden protests of 2013-14, which overthrew the government and led to the introduction of ‘decommunisation’ laws. These outlaw the display of communist (and fascist) symbols, including stars, the hammer and sickle, and especially statues (war memorials are exempted). Streets, towns and whole districts with communist names have to be renamed. There is some irony about erasing part of the historical record in such a Soviet style. Other former Soviet bloc countries such as Hungary have gathered together their Lenins and Marxes and put them in communist theme parks. In Berlin, one of the best and last communist statues, Ludwig Engelhardt’s 1985 double portrait statue of Marx and Engels, is still appealing to the masses (of tourists).

Just as Phil Collins was negotiating the release of his Engels, photographer Niels Ackermann and journalist Sébastien Gobert were looking at what had happened to all those Lenins the Ukrainians had decommissioned. What they found is in a new book, Looking for Lenin.

Collins thinks bringing Engels back to prominence in Manchester reasserts the city’s crucial role in the history of radical thought. It was the world’s first ‘nuclear free city’; the Trades Union Congress (TUC) was founded at the Mechanics Institute on Princess Street; the Suffragettes, the Vegetarian Society and the Anti-Corn Law League all began here. And 2019 marks the bicentenary of the Peterloo Massacre, a seminal moment in the fight for democracy when a massive, peaceful demonstration demanding parliamentary reform was charged by cavalry, where the Free Trade Hall now stands. Such events will be discussed in guided walks by Blue Badge Guide Jonathan Schofield, taking place during the Manchester International Festival.

Ceremony takes place in the NCP Bridgewater Hall Car Park on Sunday 16 July from 6pm, and is free.

The Radical City tour runs from 3pm to 4:30pm from Wednesday 12 July to Sunday 16 July 2017. Tickets are £10 and the meeting point is Festival Square.

The Life and Work of Marx and Engels will be exhibited at the Working Class Movement Library until 29 September 2017, and is free. There’s more information about opening times at wcml.org.uk / 0161 736 3601.

Originally published in Now Then Magazine click here.The concluding part of this article will be published in July.