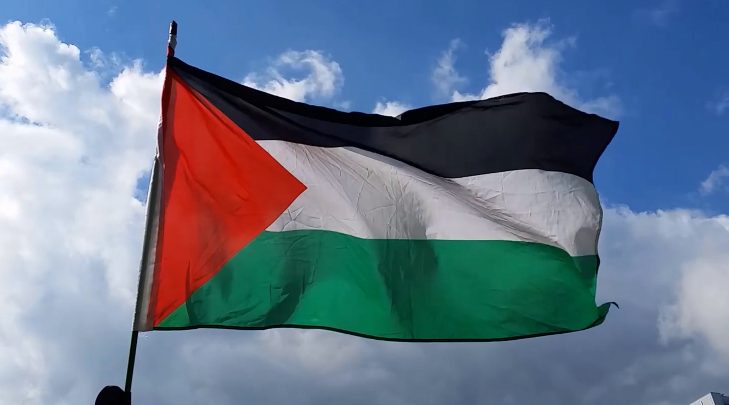 In 1948 a massive humanitarian disaster began when around 750,000 Palestinian Arabs were expelled from British Mandate Palestine by the actions of Israeli forces during the creation of the state of Israel. On the 13-14 May Manchester Palestine Action (MPA) commemorated those events, calling for solidarity and support from individuals and organisations to bring an end to this humanitarian disaster in Palestine that continues to this day, 68 years later.

It is a beautiful sunny day in Piccadilly Gardens and there are many people out enjoying the sunshine and looking at the temporary tented village set up by MPA. Speakers explain the plight of Palestinians from a plinth beneath a Statue of Motherhood, depicting a woman cradling two infants. Placards and posters on the makeshift tents describe the injustice and inhumanity that occurred during what is known as The Catastrophe, or Al Nakba in Arabic. Talking to Adie Mormech, a member of Manchester Palestine Action, the happy cries of children can be heard as they run about getting wet in the fountains. The plight of Palestine’s children, whose cries are more likely due to fear, pain, or bereavement, are on Mormech’s mind:

“If you’re a Jerusalem resident, if you are in the West bank you can’t even get out half the time, you have got checkpoints everywhere with soldiers and humiliation. Women giving birth at checkpoints because they can’t get to hospital, and many young kids getting killed for defending their houses from Israeli bulldozers knocking them down, still, ongoing, now, as we speak, right now.”

Mormech goes on to describe how Palestinians are experiencing:

“An ongoing trauma. For the kids in Gaza, we are not talking about post-traumatic stress disorder, because there is no post. There is no way you can get out of Gaza just to breathe and live a little bit. It’s chronic stress, it’s continuous stress. That’s the crime that is still going on right now, and we are saying no more, and trying to stop it.”

Under the control of British administration since 1920, British Mandate Palestine was handed over to the United Nations (UN) to decide its future when Britain proposed leaving Palestine. The UN partition plan for Palestine, Resolution 181, was voted in on 29 November 2017. The plan set out the creation of independent Arab and Jewish states, but was opposed by Palestinian Arabs and all five members of the Arab league voting in the UN.

The adoption of Resolution 181 was the spark that ignited the 1947-48 civil war in Palestine, where Jewish and Arab communities clashed, with British forces failing to intervene and stop the escalating violence. When the British Mandate ended on 14 May 1948 (Nakba Day is generally commemorated on the 15 May) the Jewish leadership declared the establishment of the State of Israel, and the clearance of Palestinian Arab communities by radical Jewish forces gained pace. Around 400 Arab towns and villages were depopulated during Al Nakba.

The Israeli declaration of independence also triggered the 1948 Arab-Israeli war.  A coalition of forces from neighbouring Arab countries, opposed to the creation of the Israeli state, invaded Israel/Palestine. The Arab forces were eventually defeated and unable to aid the Palestinian refugees apart from offering asylum in the surrounding countries.

And it is there that many of these Palestinian refugees remain, with many living in the occupied West Bank, Gaza, and the neighbouring Arab countries Jordan, Saudi Arabia, Syria and Lebanon. There are an estimated 7.1 million Palestinian refugees dispersed across the region which has been described by the UN Refugee Agency as the largest and most protracted refugee problem in the world. This is in spite of the fact that the UN passed a resolution (194, Article 11) saying the Palestinian refugees have a right to return to their homes. The Israeli state does not accept this resolution and denies their legal right to return to their homeland.

Mormech, who has spent time working and defending Palestinian rights in Gaza, says:

“There are still people with keys to their homes who can’t even go back to the area they grew up in and all of the 40 or 50 generations that have lived there before them. They can’t go back, but I can go, sometimes if I am lucky. But they can’t, the indigenous people of the land can’t even wander round their own village, they are stuck outside in refugee camps.”

Manchester Palestine Action is one of over 200 Palestinian supporting organisations calling for solidarity from people all over the world in supporting a three-pronged strategy to obtain justice for the Palestinians:

The strategy is modeled on the fight against apartheid in South Africa, which Mormech points out has many parallels to the plight of the Palestinians living in Israel, Gaza and the occupied West Bank. The inability of the UN to solve the problem, and the complicity of governments, such as the UK and USA, in selling arms to the Israelis means that people must stand up and be counted as supporting the Palestinian cause, according to Mormech, if any change is to be achieved. The three demands the pro-Palestinian groups are making are:

Despite the decades-long humanitarian crisis the Palestinian people have had to endure, Mormech is confident that peaceful coexistence is possible between Palestinians and Israelis. He is amazed at the lack of Palestinian bitterness towards Israelis and says:

“If Palestinians get freedom, there will be joy, there will be hope. There will be a new beginning, like in South Africa, when there wasn’t the carnage [after apartheid fell], there was just a real sense of – yes at last justice has been done.”