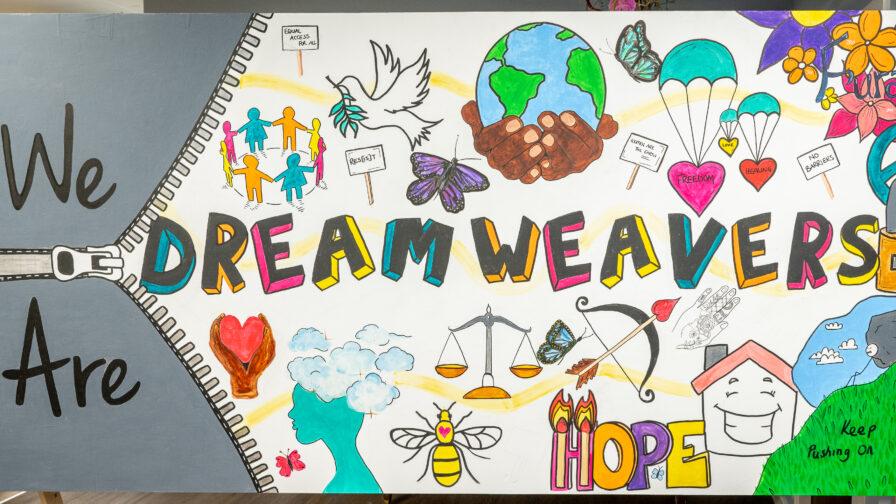 It was a bright sunny day and the streets of the Northern Quarter were bustling as the Dream Weavers Gathering reached its final day. Many activists and campaigners from Greater Manchester gathered to celebrate all the work they do with the aim of creating a future of liberation and opportunity for all. Many of the inspirational organisations gathered here are working towards dismantling systems of oppression to create new systems that are competent in listening to the needs of disadvantaged and marginalised communities.

The four-day festival, the last day of which was 22 June, was held at the Oppidan Social on Edge St in the Northern Quarter.  Organised by Greater Manchester System Changes (GMSC) and Lankelly Chase the event aimed to reconnect and invigorate organisations and activists, who struggled to meet in person over the pandemic. The previous days focused on creative workshops and campaigns, covering young people’s voices and unheard voices.

The final day encouraged the festival goers to dream and weave the future we want. From revolutionary gardening activities, to walks around the city to inspire dreams of change, to social dances, the festival offered myriad opportunities to reimagine the future with confidence.  All through the festival excellent free food and snacks were provided by Ruth’s Kitchen and the Womens Voices group, to create a homely space where everyone could feel comfortable.

Afshan D’souza-Lodhi, one of the organisers of the event and member of GMSC, said:

“This is a place that we thought was needed to bring everyone together in a space that allows them to share, inspire each other with the information they know, share their learnings, meet each other and celebrate all of the amazing support they are giving.

“We are dreaming and working out what we want as a future and how we can build that. It is less about actions and more about what the dreams are and what processes are needed for us to get to that point. How do we dream of a world where power is shared equally among people?”

As I arrived at the main large open plan room in Oppidan where many of the events took place, it was brimming with positivity and chattering people. The room was filled with intricate artwork from the previous days of the festival, and artwork from the last day was being added as I admired the exhibits. Many activist organisations were dispersed around the space with badges on, posters presented on the walls, and tables holding campaign materials.

I spoke with Sadia Mir who works with the mental health charity, Awakening Minds, based in Rochdale. Founded in 2006, Awakening Minds Practice is a specialist Punjabi Service providing community-based mental health support. The charity provides opportunities for development and growth, by improving the emotional and physical well-being of marginalised and isolated communities.

Nearly two-thirds of people of South Asian origin in England experienced mental health problems as a result of the COVID-19 pandemic. Awakening Minds aim to get to a point where it is comfortable to speak about mental health in South Asian cultures. As well as their current charity, they aim to eventually develop an awareness course that can go into schools to share learning on common illnesses such as diabetes, epilepsy and ADHD.

SAWN was established in 2007 to promote the welfare of Black/African women in Oldham and Great Manchester. They aim to realise the full potential of women by engaging them in activities, and providing opportunities and events to reach independence. Dada Zabeda, activist and member of SAWN said:

“This was started by Rose Sally, who is the CEO of the charity. It is more about the experience she had as she is from Uganda and when she arrived here she went through the whole immigration process which can be quite cruel and she experienced first-hand what it’s like to be marginalised.

“As an asylum seeker, she noticed the differences in treatment and opportunities available and just how you feel left out. Rose started this organisation to make black women feel like they matter. Even if you’re an asylum seeker and you haven’t got that piece of paper that classifies you as legal in this country, you still matter, you’re still a human.”

The Women’s Budget Group, says it is women, especially low-paid, BAME and migrant women throughout the ongoing pandemic putting their lives on the line to deliver vital care to the British public having previously been told they are “low-skilled” or underserving of liveable wages or stable contracts.

SAWN was made to be used as a place that women can come to during feelings of alienation in society. “It’s like a second home to many women, they can come here and they know they’ll find their cultural foods. We share a common value and there’s something about identity that just merges well together and they can come and be free to themselves in a safe space,” Dada said.

The group are also involved in a choir where they do weekly rehearsals and had the opportunity to perform at the Royal Exchange Theatre for the Queen’s Jubilee. The choir is a place for people to come together, sing, dance and eat whilst utilising their voices and speaking about issues that they are concerned about. SAWN were also involved in the COP 26 climate conference with support from Lankelly Chase.

“A group of us went and there were different kinds of projects that connected to climate change, so those affected here and those affected in Africa. One of the major projects is Dorothy’s Duvet, where we’ve got loads of people to donate duvet covers and their pillowcases to us,” Dada said. “Instead of people throwing their duvet covers away, they donate them to SAWN and we wash them and ship them off to Uganda. Instead of just sponsoring them for food, they will take those duvets and they’ll make clothing and sell them and that’s how they make their living.”

After being born in Burundi, Dada’s mother left to go to Europe and Dada eventually followed a couple of years later. Her mother went through the immigration system so that Dada did not have as many difficulties, yet she still experienced it at a young age where she had to attend interviews in offices to present various documents and put fingerprints down on forms. Even though Dada did not experience immigration first-hand, she was a refugee when she left Rwanda in 1996, when the Civil War and genocide was still going on.

“You see people walking around and you think they’ve got it all figured out, but they’re in a lot of pain and there’s a lot of trauma and confusion that people walk around with and they don’t always have the voice to express it. SAWN tends to pull them out of that and they come and let it out,” Dada said. “A lot of us have lived experience, so we can empathise with the pain and the struggle that they’re going through. It comes from the heart.”

Unlimited Potential is a social enterprise that focuses primarily on social, economic and environmental issues whilst providing services that improve people’s health and wellbeing. I spoke with Chris Dabbs, chief executive for Unlimited Potential who explained the organisation and the upcoming projects they are taking part in.

“We started about 20 years ago as a small community group in Salford in an area called Charlestown. Our purpose is about people having meaningful lives and there’s a point in getting up in the morning, but the way we do it is for the system and funders. We call it a social innovation for happiness,” Dabbs said. “We are doing economic innovation as well, so essentially taking issues that communities think are extremely difficult and we work with the people who are seen as the problem to create new solutions around that.”

Unlimited Potential has also been working with various organisations, one of them being The Elephants Trail which is a project that helps people with lived experience of deprivation or discrimination, and professionals work equally together to solve the challenges that people face. The Elephants Trail starts with exploring and building relationships between people from different backgrounds and life experiences. This enables discussion about power, inequality and the most difficult issues.

“We’ve been working with a group of young adults for six months and they have created their own agenda about what’s important to them. They have identified two key themes, one is which is about enjoyable work with a good income and that means they can pass it onto their children which is the important part,” said Dabbs. “They also want to look at how to help local people to have a good home, not just a house.

“We are also looking at how we can improve the employment of autistic people because they have the lowest employment rate of any group in the whole population.”

Data from the Office for National Statistics records the distressing figure of just 22% of autistic adults in any kind of employment. This means that clear actions need to be made to improve employers’ understanding of autism and improve the support that autistic job seekers and employees receive.

Greater Manchester has a solid history of promoting radical change and fighting for what is right. There are activist led organisations in the city region that are creating change and working towards dismantling oppressive system every day. The Dream Weavers festival gave these organisations a chance to relax, enjoy and learn from each other, and invigorated them for the challenges ahead in creating the future they dream of.