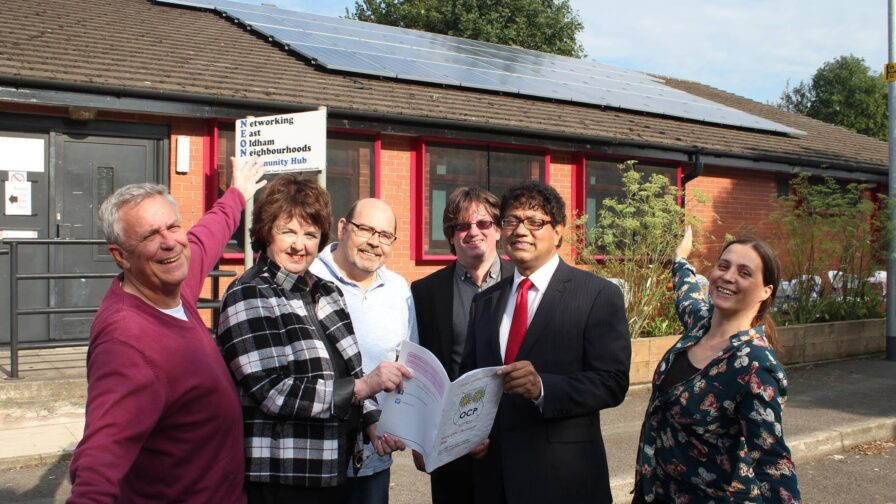 Through community wealth building models councils like Oldham are redefining the terms of net zero, providing local ownership of energy production while also decarbonising it.

Under Boris Johnson, reports say, the British government is “at the leading edge of nations represented at COP26” when it comes to promising to cut carbon emissions.

But as ever with the climate emergency, there’s a gap between rhetoric and action. Far from unveiling detailed plans and policies for decarbonising, Johnson’s right hand man Rishi Sunak’s Budget announcement in the run up to Cop26, cut air passenger duties on domestic routes, when reducing air travel is one of the easiest ways an individual can reduce their carbon footprint, and cancelled a promised rise in fuel duty alongside committing £21 billion to be spent on roads, despite evidence showing new roads induce more traffic. This Budget is far from the leading edge of the fight against climate change.

Westminster is also depriving local authorities of the adequate resources needed to tackle the climate emergency, with councils across England, Wales and Scotland facing a budget gap of over £3bn for the next financial year. Councils generally want to do good by the planet and by people — but lack the resources to do so.

Within this hostile national policy context, a council in Greater Manchester is working hard to create change through radical and innovative energy policies.

Oldham Council set up two energy schemes: Saddleworth Community Hydro (SCH) in 2014, and Oldham Community Power (OCP) in 2016. To date, OCP has installed solar panels on five schools in Oldham and one community centre, in total generating 220 kW of electricity an hour; while Saddleworth Community Hydro generates 60 kW of electricity an hour from Dove Stone Reservoir in Oldham, enough to power about 85 homes.

These energy schemes all play their part in dealing with the climate crisis. But what’s radically different about these decarbonisation schemes is their democratic DNA. Both companies are co-operatives, which have a democratic structure in built, and they are embedded in their local communities with local directors on their boards, and have issued community share offers to raise funds and increase local ownership and engagement with the schemes. The ultimate aim of these co-operatives is to benefit their local communities, unlike the big six energy suppliers whose focus is on increasing profits and paying out shareholder dividends.

Schemes like OCP and SCH thus offer glimpses of an alternative zero-carbon future to the one peddled by the giant fossil fuel corporations. It’s an alternative which uses proven technology to slash greenhouse gas emissions while enabling citizens to own, run and engage with local renewable energy infrastructure.

These organisations would never have got off the ground without Oldham council pulling levers at its disposal, like funding and convening power.

Observers describe this as an exercise in community wealth building, a way to build local economies that are inclusive, collaborative and democratically controlled.

Community wealth building advocates argue this is done by reconfiguring local “anchor institutions” – large, non-profit, public sector organisations whose long-term sustainability is tied to the wellbeing of the populations they serve – to produce more sustainable and equitable outcomes, instead of allowing large corporations to enter local markets and extract wealth by the goods and services they offer.

By applying community wealth building to the climate crisis, councils like Oldham are attempting to redefine the terms of decarbonisation, increasing access to energy while also decarbonising it.

The proposal to develop community solar energy schemes in Oldham was first introduced at a public launch event in December 2014. The idea behind it was to use the town’s public buildings to generate energy and create wealth locally.

Around 50 participants attended the OCP’s public launch to propose possible sites for renewables. In 2015, three volunteer directors were appointed to the board from interested members of the public, and roughly 50 school and community buildings in the Oldham were assessed for their suitability.

The group leveraged several avenues of funding. They received an Urban Community Energy Fund grant from the Department for Energy and Climate Change (which no longer exists) for the first phase of the project. They also launched a community share offer to fund the first round of installations, and as the share offer didn’t raise the full amount needed, Oldham council also loaned £250,000.

Oldham Community Power (OCP) was incorporated as a community benefit society (a form of co-operative) in 2016, and it has now installed solar panels capable of generating 220 kW an hour, on five local schools and one community centre in Oldham — making it the largest generator of community energy in Greater Manchester.

Looking solely at electricity used, the solar panels provide nearly 90% of the schools’ energy demands, enabling them, to a large extent, to move off grid altogether. Schools can also sell the electricity generated, that they do not use, back to the grid to receive an income.

Researchers at the Centre for Local Economic Strategies (CLES) think tank, and the Carbon Co-op energy advocacy group, both based in Manchester, believe OCP demonstrates the power local authorities have in shaping local markets to create a democratic, green economy.

“To help Oldham Community Power to set up, the Council provided some staff time as well as financial support by way of a loan to get the organisation going,” Laura Williams, co-author of the toolkit and mPOWER project manager at Carbon Co-op for, said.

“It’s through community mapping, relationship building and organisation development support that local authorities can help to seed generative businesses, co-operatives, and energy organisations, ensuring that the democracy and participation is baked into their energy transition work.”

Despite being starved of resources by Westminster, councils still have many levers they can pull to kickstart the journey to zero carbon. “Our municipalities do not have to wait around,” Williams argues. “They can be trailblazers and set their own path towards energy transition.”

‘Shoots growing through the cracks’

But why don’t councils like Oldham simply get an energy giant to supply their towns with green energy?

For Ellie Radcliffe, a senior researcher at the Centre for Local Economic Strategies (CLES) who co-authored the toolkit with Williams, we can’t think about decarbonising the UK’s energy system without also tackling its associated economic problems.

“The problem with relying on Eon or npower to supply us with green energy,” she explains, “is that ultimately those companies are extractive. So, yes, that would solve the problem of carbon. But it wouldn’t solve the problem of fuel poverty, or the fire and rehire practices of companies like British Gas, or anchor institutions paying extortionate prices for energy.”

Radcliffe questions whether the private sector would turn itself green by their own initiative because fossil fuels are more lucrative. “The reality is that fossil fuel extraction still yields short-term profits,” she continued:

“That means that it’s in the interest of those companies to continue to extract fossil fuels. The reality is that we have a system that prioritises growth at the expense of all else. It’s all about the shoots growing through the cracks of a broken economic system – and, in this case, a broken energy system.”

The solar panels also save the schools and community centre money. “We work out what it would cost if schools stayed with them [energy companies] and knock 20% off,” says Bill Edwards, one of the volunteer directors at OCP.

Bill outlines his broader vision for community energy schemes. “Saddleworth became famous because someone built a mill, people moved in around it and you’d have a sustainable community. Each village had its own mill: Uppermill, Green Field, Delph, Dobcross.

“If we can manage to do that in design and not think of housing as something which satisfies the housing department or industry, but actually say, ‘we’re going to build a community that’s got all those things.’ The whole thing is an economical economic social unit. That would be a huge breakthrough.”

“I must have planted several thousand trees in my time,” Bill says. It was because of his roots in local environmental activism that he came to be involved with OCP and SCH.

“I retired early. It was an option I couldn’t refuse! I’d travelled all over the country with work, from Scotland to the south east – I did 40,000 miles in my last year there,” Bill said.

The company Bill worked for gave him the option to work for a volunteer organisation as a bridge to retirement, he explains that he wanted to do something which would help the environment. “I thought, well I’ve done all these miles on the roads burning a diesel car, so I’ll work with the Conservation Volunteers.”

While planting trees with the Conservation Volunteers, “only native plants,” he assures me, he became chair of Oldham Borough Environment Forum, and then leader for the Oldham Partnership’s steering group. “I got versed in all these things,” he says.

The really radical implications of schemes like Oldham Community Power is its promise to increase access to energy while also decarbonising it. As majority shareholders of OCP and SCH, the people of Oldham, people like Bill, directly control their local energy infrastructure to ensure that all the community’s social needs are met.

There’s a one member one vote system, he also highlights, meaning all shareholders have an equal say over the running of the company, regardless of how many shares a single person purchases, and each school and community centre has a director on OCP’s board.

And where there’s a stake there’s community engagement, Bill argues. “I’ve stood up many open days at the hydro scheme and the kids have come along and I talked to the parents about what we’re doing,” Bill says. “When we explain to the parents what was going on they’d say, ‘oh, I didn’t know about this!’”

Radcliffe says: “It’s about building a democratic, holistic approach to the energy system, both by creating a way for people to be actively involved in their energy generation, and by getting things like solar and wind up in places where people go past them.”

Oldham’s community energy schemes have clearly been successful. But is it financially sustainable? As the Bristol Cable has documented in its reporting on Bristol Energy, which went bust last year, municipally owned energy companies can become black holes for council money.

Radcliffe believes OCP and SCH can avoid this pitfall because they generate energy, whereas Bristol Energy supplied it. This, in a sense, makes them immune to the vagaries of an extremely competitive energy market to which Bristol Energy was subject, because OCP and SCH aren’t buying electricity or gas at wholesale prices and then selling them on to customers.