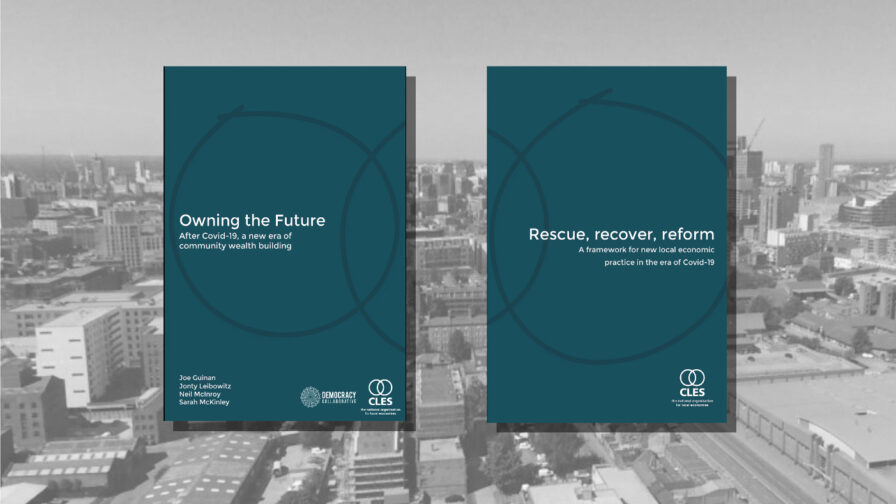 If we want to own the post-pandemic future we need to concentrate on community wealth building, and embrace the “new Leviathan” state released by the coronavirus crisis, say timely reports released by Manchester based think-do tank the Centre for Local Economic Strategies.

The reports, produced in response to the unprecedented economic upheavals that have accompanied the global coronavirus emergency, provide a guide for local leaders to seize the opportunities present in this crisis and provide strategies that need to be adopted on a national scale to provide the supportive and fertile ground that local economies will need to survive and thrive after the lockdown.

We are in the early stages of the economic shock caused by the pandemic, but the initial figures show that local economies are going to need all the help and good advice they can get.

The US economy, the world’s largest, sank at an annual rate of 4.8%. Since mid-March more than 26 million have filed for unemployment and US oil prices turned negative for the first time, with the price of a barrel of oil dropping to -$37.63. The US has tried to cushion the blow by pumping $3tn(£2.4tn) of public money into their economy.

In the UK, the Office of Budget Responsibility predicts a 35% drop in GDP in the second quarter (Q2) of 2020. Universal Credit claims rose by 1.2 million in three weeks running up to 9 April, with unemployment predicted to rise to 10% in Q2 of 2020 from 3.8% in January. To fund the response to the crisis the UK has borrowed £103.7bn as of 30 April.

In “Rescue, recover, reform” CLES provides guidelines and information for local authority politicians, civil servants and economic development professionals who are responding to the considerable shocks of the Covid-19 crisis.

In the “Owning the Future” paper, written in association with The Democracy Collaborative, the focus is on community wealth building before, during and after the coronavirus pandemic. The authors point out the problems caused by our dominant economic system and the huge scale of the crisis we face, stating:

“Neoliberal capitalism is beset with the compounding problems of toxic inequality, ecological collapse and democracy in decay… This is a major public and economic event of historical importance, potentially unprecedented in its magnitude in peacetime. The effects on our social, economic and political future will inevitably be profound and long-lasting.”

The authors believe that “community wealth building” (CWB) is the best way to help local economies survive the crisis and thrive after it. The CWB concept emerged in the mid-2000’s as a way to build local economies that were inclusive, collaborative and democratically controlled by reconfiguring large local “anchor institutions” to produce more sustainable and equitable outcomes.

The most well-known CWB approach was adopted in Preston and is often referred to as the Preston Model. This utilised a range of large influential anchor institutions in Preston which included Preston City Council, University of Central Lancashire, Community Gateway Housing Association and Lancashire Constabulary. Using the principles of progressive procurement, which were pioneered in Manchester, the Preston Model increased the amount of spending with companies which were based in Preston, or had branches in the city, allowing more money to circulate within the local economy rather than being extracted out of it. Manchester also saw efficiency savings of £65 million through following progressive procurement policies.

Progressive procurement is just one of the five pillars of CWB: the other four, listed below, are covered in the “Owning the Future” paper.

The paper also mentions successful examples of CWB systems in other areas including the Wirral, Newham, Islington, North Ayrshire and Bristol. The authors believe the current emergency offers the opportunity for a new era of CWB to take root in many other areas and promote the “rebirth of community in this country”.

The siege, leading to recovery and reform

The authors criticise the common wartime economy analogy often used to describe the mobilisation needed to combat the coronavirus pandemic. They say due to the wholescale shutdown of large areas of the economy in the initial lockdown phase of the pandemic, that a siege economy is a more appropriate. During the siege phase of this crisis the authors state:

“We may be looking at economic contractions deeper and quicker than those experienced during the great depression of the 1930s… Most worryingly, Covid-19 is likely to disproportionately affect low-paid and vulnerable workers…  Consequences for businesses of all shapes and sizes will be severe, ranging from potential industry-wide collapse in sectors such as aviation to the potential decimation of many small businesses, with six in 10 UK businesses already reporting that they have three months’ worth of cash on hand or less.”

Support for incomes, access to essential goods and help for those faced with eviction or overwhelmed with debt are priorities that need to be addressed during this phase. The paper also acknowledges the re-evaluation of who the truly essential workers are in our society: the frontline public service providers rather than the previously idolised “wealth creators”.

The authors describe a recovery and reform phase after the worst of the public health aspects have passed, which should be used to rebuild the economy, avoiding the mistakes made after the financial crisis of 2008, which saw banks and financial institutions bailed out with public money and a slashing of public services due to austerity.

The good, the bad and the ugly

The paper points to three possible scenarios for the post pandemic world. The bad involves the:

“Intensification of the worst aspects of the UK’s ‘Big Society’ agenda, in which the goodwill of the community is used as a smokescreen for further austerity by relying on unremunerated volunteering in place of well-funded, democratic public services.”

The ugly scenario raises Naomi Klein’s “Shock Doctrine” disaster capitalism response that could combine the development of a more authoritarian state with the worst excesses of unbridled corporate capitalism, a scenario that could undermine “basic democratic structures” and restrict civil liberties.

The good scenario is of course the one preferred by the authors, who believe the present crisis is “our last best opportunity to change course and to build a more local, generative, social and democratic economic system.” Building this new economy will require a mixture of macro-policy top-down solutions and a “groundswell of democratic strategies from the bottom up.” The paper then sets out the conditions that need creating to enable the good scenario to become the winning one.

The authors suggest three major pillars for enabling the good scenario to become our future.

There should be “buyouts not bailouts”. The mistakes of the financial crisis of 2008 should be avoided and any companies requiring public financial aid would in return give the government an equity stake in the company. Vulture capital must also be stopped from snapping up extremely vulnerable businesses using the considerable power of private equity leverage.

A new green industrial strategy, and a “fully-fully fledged Green New Deal”, is also presented as essential to tackling the climate emergency, productivity and regional inequalities:

“We need an industrial strategy capable of re-orienting the UK economy away from extractive sectors and precarious work and towards a generative and sustainable economy with stable jobs at its heart. The Covid-19 crisis may in any case force the government to focus on core sectors of the economy that people need to stay alive… with the reproductive labour of care workers and cleaners finally being treated as critical to our collective wellbeing rather than as disposable ‘low-skilled’ work.”

The third essential pillar is a “new social contract and welfare system” to enable a just transition to a fairer economy. The authors criticise the small state mentality that has caused decades of underfunding to front line services such as “our underfunded, understaffed and underequipped NHS is seriously struggling”. This chronic underfunding has undermined the social security safety net and the capabilities of the local and national state, about which the authors say “We should never again permit such an evisceration of the democratic state. Coming out of this crisis, we must create a politics that ensures that things will be very different going forward.”

The reports released by CLES and their partners reveal the political and economic mistakes that have led us to this point in time, and the potential dangers we face in creating an even more unequal and precarious society for many by reacting to a coronavirus created economic meltdown in the same way as we reacted to the 2008 financial crisis. Their emphasis however is on embracing the possibilities of the “new Leviathan” state and the positive change that could from this unprecedented crisis:

“The actions we take now, both as emergency responses and to aid a future economic recovery and reform, will likely have profound and lasting consequences… We are resolved that this public health and economic crisis must only accelerate the work to build a more democratic, inclusive and community-based economy – one truly centred on collective well-being, local resilience, ecological sustainability and economic justice.”

For a PDF of “Own the Future” – click here