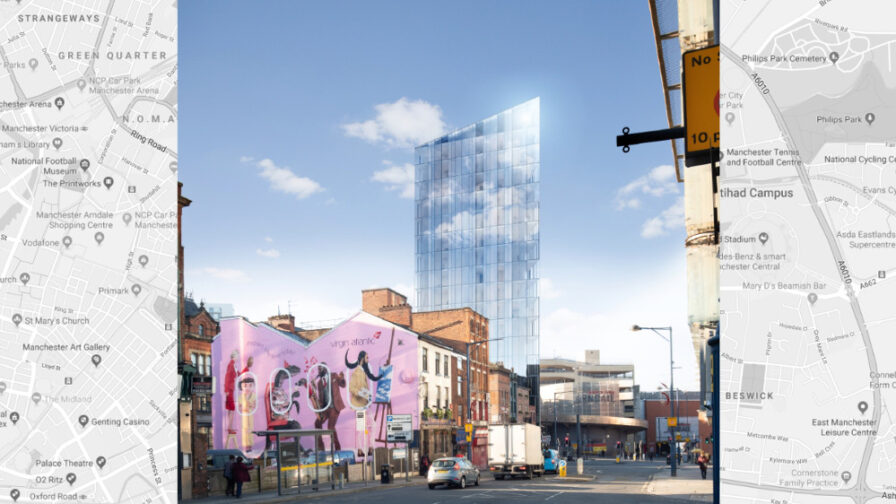 Responding to a call from Piccadilly councillors, Manchester City Council leader Sir Richard Leese said it would be 'entirely appropriate' to use money made from the sale of land to build the infamous 'Shudehill Shard' for building social housing level rent homes in the ward.

Manchester city council head Sir Richard Leese has said that money made from the sale of the land to build the infamous “Shudehill Shard” should be set aside to build rented housing, at or below Local Housing Allowance levels, suitable to low income households.

Responding to an open letter sent by three Labour councillors for Piccadilly ward calling on the council to allocate the receipt from sale of the land to building social housing in the ward, Leese said that it would be “entirely appropriate” to use the Shudehill capital receipt to meet this objective of building housing affordable to families and individuals on low incomes.

The proposed 17-storey development on the site sparked controversy in June last year when the council used emergency powers put in place due to the Covid-19 lockdown to approve an amendment to the planning application, allowing it to be developed as offices instead of 65 apartments.

Salboy’s previous proposal, approved by the council in July 2019, had been for a 17-storey tower and 6-storey conversion of a 1920s warehouse to provide 65 apartments. The amendment passed in June permitted Salboy to develop the site into offices aimed at small firms in the creative and technology sectors.

In the letter, councillors Jon Connor-Lyons, Sam Wheeler and Adele Douglas make clear their opposition to the application to develop the site of 1 & 3 Back Turner Street on the edge of the Northern Quarter into offices.

“Key to our objections were that the development had a negative effect on the surrounding environment, while also making no contribution to solving the housing crisis which continues in our city.

“The council will realise a sizeable capital receipt from this land deal, considerably more than otherwise given the novel height of the building,” the signatories argue in the letter. “We therefore believe that these monies must be used to directly counter the harm of the development.

“We believe in the importance of place and community, and meeting problems where they are… we are therefore calling on this capital receipt to be expressly and specifically earmarked for the construction of homes for social rent within the boundaries of Piccadilly Ward.

The letter goes on to state that using the capital receipt in this way would contribute to the councils efforts to combat the housing crisis and that it would make the area more accessible to Mancunians who could not afford to buy and rent in the area at market prices.

In an email responding to the letter, head of Manchester city Council Richard Leese said it was “entirely appropriate” for the money to go towards building social housing in the ward and that:

“We have been working over the past year to create a new local delivery vehicle (LDV) with the purpose of accelerating the development of housing affordable for individuals and families on low incomes.

“Part of this process has been site identification and we have been looking at a couple of sites in your ward, one of which is earmarked for one of the first two schemes to be brought forward by the LDV. Our aim is to have rents at no more than local housing allowance level and that will only be achievable with capital subsidy.

“It seems entirely appropriate to me that we should use the Shudehill capital receipt to meet this objective.”

Local Housing Allowance rates are calculated as a percentage of the market rents for a set area. This LHA rate then determines the maximum amount of housing benefit the Department for Work and Pensions will pay towards that tenants rent For example the LHA for a two bedroom property in Piccadilly’s M1 postcode district is £149.59 per week. The three councillors responding to Richard Leese’s reply, stated:

“We’re glad the leadership has accepted Mancunians’ need for accessible housing in our city centre and this should be a key area for the council’s capital strategy. We have already met with officers about a potential site within Piccadilly and look forward to making a public announcement in the coming months.”

The Northern Quarter development site itself has a troubled history with two previous planning proposals and three planning committee rejections since billionaire Fred Done’s company first brought forward plans for a 13-storey hotel for the site in 2017.

Manchester city council rejected initial applications in large part because of the height. Even after Salboy Limited, the developer looking to build on the site, reduced the height slightly, concerns lingered. In February 2018, the application came before the planning committee and was again rejected, with Cllr Joan Davies calling it a “giraffe among hamsters” and arguing it did not fit in with the conservation area. About Manchester reported this decision was the end of a “soap opera”, and local activists cited it as a “victory for residents”.

In September 2018, Salboy returned with new plans and caused uproar when they announced the next-day demolition of the site’s 1870’s warehouse at a public consultation. While the public backlash could not save the building, it did result in Salboy agreeing to retain the 1920’s warehouse on the site.

Then came the uproar in June last year when emergency powers were used by the council, to approve an amendment to the planning application. Salboy’s previous proposal, approved by the council in July 2019, had been for a 17-storey tower and 6-storey conversion of a 1920s warehouse to provide 65 apartments. The amendment passed in June permitted Salboy to develop the site into offices aimed at small firms in the creative and technology sectors.

The final amount to be accrued from the capital receipt received due to the long term lease of council owned land on the development site has yet to be determined, but is expected to be above £0.5 million. Manchester City Council has been particularly prolific in selling publicly owned properties with 673 sold between 2014 and 2018. With one plea accepted for capital receipts received to be used by the council towards building low cost rented homes, will more follow?

Feature image: composite of images from Google Maps and Salboy