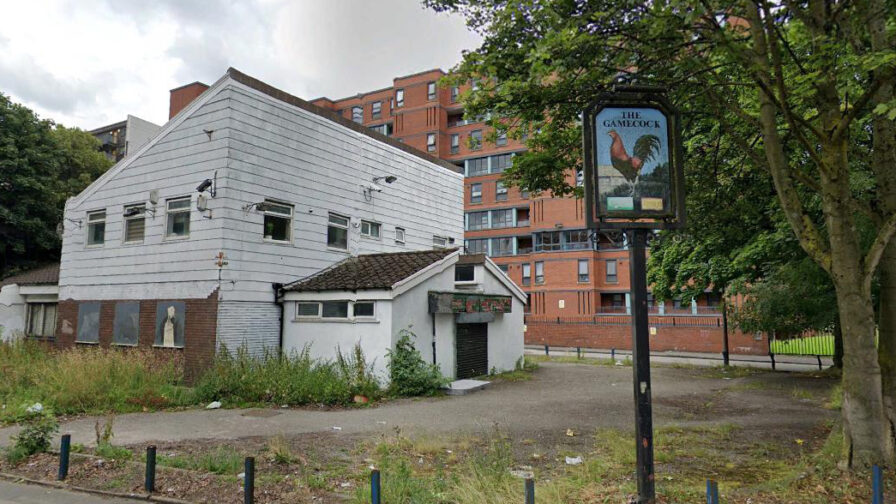 Block the Block is a campaign started by residents of Hulme who are opposed to the building of high-rise student blocks, on a plot of land that has already had two similar proposals rejected by the council’s planning committee.

Their Crowdfunder aims to pay for a planning consultant to help prepare their case against this new proposal.

Residents in Hulme are organising to oppose a plan for a block of student flats on the site of the Gamecock pub, following the rejection of two previous proposals for student flats on the site. They are raising money via a Crowdfunder to pay for the services of a planning consultant to put together a formal objection and level the playing field against what they describe as a “well-funded” developer plan.

Block the Block is the campaign led by residents of Cooper House and Hopton Court in Hulme, which sit either side of the derelict pub site. The last development proposal for the site in 2012 (the first was in 2008) was refused with unanimous support from the planning committee with a major reason being there was no demonstration of unmet need for student accommodation. The excessive height of the proposed blocks and their effect on homes already there was also listed as a factor behind refusing the proposal.

There is a new developer behind the current proposal, called Curlew Capital. They are planning to build two blocks of seven and eleven stories high, which will hold 250 student accommodation units.

Living nearby Hopton Court on the Aquarius estate is Sally Casey who is a member of the Aquarius Tenants and Residents Association and the Age Friendly Hulme and Moss Side group which is researching how neighbourhoods can be made better for older people. Casey is a member of the Block the Block campaign and has lived through many changes and development disputes in Hulme including the clearance of the crescents in the early 90’s.

While door knocking and leafletting the neighbourhood, Casey says she was “met with horror” when she explained the planned development. Casey was also upset that she, as a member of the Aquarius Tenants and Residents Association, had not been invited to a public meeting held by the developer and their PR company Cratus, which local councillors and representatives from housing association One Manchester had attended.

Student housing owned by private companies is a big and growing market. One of the largest real estate transactions in 2020 saw a portfolio of 69 purpose-built student accommodation (PBSA) properties, along with iQ Student the company owning them, bought for £4.7bn by multinational real estate and private equity firm Blackstone; twelve of the properties in this deal are in Manchester.

Rent rises for en-suite student accommodation have been above the rate of inflation by 16% since 2014. High rents and poor conditions during Covid led to University of Manchester students carrying out a rent strike and occupation of the University-owned halls, which led to them winning a large reduction to their rent.

Curlew Capital describe PBSA as their lead offer and claim to have £1bn+ invested in real estate across Europe, their portfolio includes more than 10,000 beds across 34 schemes in 22 major university markets

Resident of Hopton Court and Block the Block campaign member Jane Placca said she believed the area did not need any more student residences and that these residence blocks offered restrictive cramped space for the students to live in. She went on to say, “I oppose the development as it is bad for both students and the existing community where there is an excess of student blocks.”

Placca pointed out that there were already two student blocks run by Liberty Living, which were situated to the side of and behind Hopton Court. The Royal National College of Music student halls on Booth St West are just a couple of minutes’ walk away from Hopton Court. Cambridge Halls on Cambridge St and Cavendish Halls on Cavendish St are also within a four-minute walk of Hopton Court. There are also more student blocks to be built on nearby Bonsall St for Manchester Metropolitan University students, Placca says.

Explaining the campaign’s need for professional help, Placca said. “We need a planning consultant to oppose the development as they have detailed knowledge of how to oppose this in a way, and with the language, the planning committee will accept.”

The planning application for this proposal has not yet been received by Manchester City Council, but is expected to be submitted early in January. Curlew Capital appear confident they will get a direct development Manchester-based PBSA scheme “complete in time for the start of the 2023/24 academic year”, as reported in a number of finance and development publications. Curlew’s confidence may be due to a successful legal appeal being lodged against the planning committee’s last decision to block building on the site, meaning a new proposal along similar lines, such as this, may be viewed more favourably by the planning committee.

The Crowdfunder launched by the campaign group has raised 94% of its target, with 72 supporters, and runs till 1 January 2021. The Crowdfunder page explains that many of them have lived in Hulme for most of their lives, seeing many changes including the gradual loss of pubs they used to socialise in to development.

The Block the Block campaigners say they have lots of ideas for other uses of the site that would be positive for the local community and help Hulme to develop in an age-friendly way and are keen to discuss these ideas with the council, who own the freehold to the land on which the Gamecock pub sits.