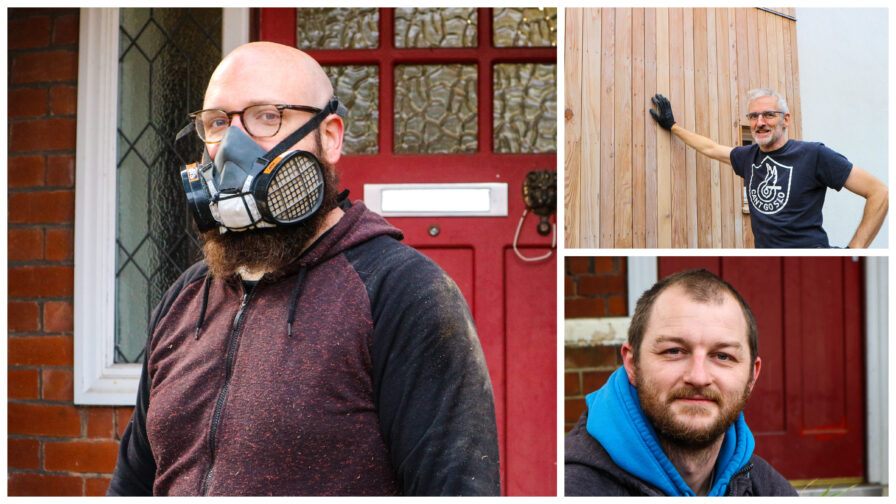 On an unassuming cul-de-sac in Whalley Range, a scaffold-clad 1930’s semi-detached house is the site of an exciting new project. The property is undergoing a ‘full works’ retrofit to bring it up to environmental standards – and it’s being delivered by workers laid off from the creative sectors.

I arrive on site and am pointed up a ladder into the loft. Ducking instinctively under a low beam and weaving my way through an assortment of tools and equipment, I find myself in front of a wall of exposed red brick. Travis Heiner, who joined the project six weeks ago, is cutting pillow-like pads of insulation to line the wall. It’s a far cry from the sets he would be building for the Royal Exchange Theatre had the pandemic not struck. Or is it really that different?

“It’s fairly easy to move over,” Travis, whose background is in construction and design, explains. “We use a lot of the same tools and ideas for construction. It’s just the specifics of houses that are different.” He pauses, considering the differences, “I mean, you’re cutting the same angles a couple of times but now it’s not for a show – someone now has to live here!” he laughs.

Travis grew up in San Francisco and moved to Manchester after the 2016 US election. “I’d half-joked that if Trump wins, then I’ll move here. I had to follow through with my promise!” I can tell he’s smiling under his dust mask by the movement of his thick brown beard.

Travis still works part-time at the Exchange as Head of Stage. However, with no performances for the foreseeable future, he’s learning the retrofit ropes.

“It’s gonna be a while before a vaccine and before theatre can pick up to where it was before. So for the foreseeable future, I’m gonna have to split my time here to make enough money to feed my family.”

Retrofit Get-in was started by Andrew Glassford, a freelance sound engineer and production manager living in Manchester. It’s supported by Red Co-op, a worker co-operative that specialises in retrofit and renewable design.

I chat to Andrew by phone the day before visiting Whalley Range. “When Covid-19 hit I was 12 hours away from the get-in of a show I had spent two months working on,” he says, “Within two weeks the rest of my work had been cancelled or postponed until 2021. It was devastating.”

Andrew’s is a familiar story for thousands of workers prevented from making a living through creative endeavours during the pandemic. While the government has injected money into cultural institutions and venues, too little has reached creative industry workers and not in time to protect many. At least 7,442 workers in the sector have been made redundant, while creative freelancers are not eligible for the government’s furlough scheme and have been left reliant on Universal Credit.

Andrew set up Retrofit Get-in to help those like himself made redundant by Covid-19 back into work through domestic retrofit projects specifically by utilising the transferrable skills many workers have to take on another existential issue, the climate crisis.

“We see Retrofit Get-in being a place for theatre workers to come whenever they are between gigs,” Andrew explains, “a labour co-operative supporting their creative endeavours while promoting climate action.”

Starting up in the summer, the project has employed nine theatre and live events workers on the house in Whalley Range and has more projects in the pipeline.

Alan Tierney is another former stage technician on site today. He’s downstairs insulating the frame and brick work around a new set of bay windows. Having worked at the Lowry Theatre in Salford for 16 years, he took voluntary redundancy in June. Despite a decent payout, it wasn’t enough to support him and his partner, who is currently training full time to become a teacher.

“Everything came at the wrong time for my circumstances. What the Lowry could offer financially wouldn’t have supported me through this.”

After hearing about Retrofit Get-in through word of mouth, Alan got involved. “I’m probably in this for the long haul,” he says, “I don’t think I would go back to the theatre full time. 16 years feels like I’ve done my time.”

Although many of the skills are transferable, he stresses that there’s a learning curve. “It’s interesting,” he says, reflecting on his new profession, “a lot of this we don’t do in theatre. We build sets. They generally come in big pieces which we bolt together. Coming to something like this where you’re actively making things to fit in a specific space – it’s not been easy. You’d normally have a whole number of contractors in to do what we’re doing.”

A significant challenge to scaling up retrofit in Manchester, and more broadly the UK, is a chronic shortage of skilled construction workers. Last year the Construction Industry Training Board (CITB) estimated the UK needs 230,000 additional skilled workers to meet the demand for new green infrastructure and housing projects currently approved, let alone the 26 million existing homes which need retrofitting.

There’s also a shortage in retrofit training in the UK and Europe. Research by Fedarene, a European network of energy agencies, found that less than 10 per cent of EU construction workers have energy efficiency training or the skills to retrofit houses.

While a challenge, retrofitting homes presents a big opportunity. Research published by UK100 shows retrofit could create 455,000 full-time jobs nationally and more than three million jobs across other sectors as part of a transition to a green economy.

The good news is the work itself crosses a whole number of disciplines, many of which theatre and events workers already have the skills for.

Charlie Baker is the lead designer at Red Coop, the retrofit contractor employing the theatre workers.

He says many of the skills needed for retrofit are the same as the joinery skill set, some of which you can pick up on the job. “Once you staple a waterproof membrane to a roof a couple of times,” he explains, “You learn how to not wrap yourself up like some shoddy Christmas present.”

Theatre and events workers are well positioned to make the transition, he says. “The nice thing about theatre workers is they’ve got a range of skills, they can do a lot of things without floundering.” Still, he acknowledges, “They need quite a lot of skilling up to do retrofit at the speed and scale that we need.”

In Manchester cooperatives like Red and Carbon Coop, as well as companies like Snugspaces and Ecospheric, have retrofitted several hundred homes between them in the last five years.

However, a report brought to Manchester city council last year stated that up to 60,000 residential and commercial buildings in Greater Manchester would need retrofitting every year for the region to reach its target of becoming zero carbon by 2038. This means we need to scale up retrofitting fast!

Apart from the obvious environmental benefits, Charlie also enthuses about the effect retrofitting can have in breathing new life into a building. For example, in the house I’m visiting, alongside the hidden improvements of insulation and repair, exterior walls have been sheathed in wood cladding over a clean white paint job. Inside, the first floor staircase is being extended into a loft conversion which will be lit by a floor-to-ceiling dormer window.

Thus Red Coop often sets out to reimagine spaces within each property. Their collaboration with Work for Change, a cooperative in Hulme, produced an open plan office with a clean industrial aesthetic fitted with large windows that flood the poured concrete floor with light. It’s all a bit Grand Designs, but with the eco credentials.

“We’re trying to make sure that retrofit is beautiful enough that everyone will want one. We need to get to a point that a warm healthy, heatable house is desirable. People don’t realise just how much comfort can be achieved by having an insulated house.”

Charlie also says retrofitting your home can have economic advantages in the long run, “I’m working with the assumption that we’re cutting average heating bills by 75% because that reduces the amount of energy needed, with enough solar panels on the roof to make a house zero carbon.”

One factor holding back retrofit, however, is cost. While government programmes such as the Green Home Grant offers £5,000 – £10,000 for retrofit improvements, they have been heavily criticised for penalising contractors who have to go through an exhaustive accreditation process, and homeowners who are means-tested to qualify. Every household can claim £5,000 to cover up to two-thirds of the cost of home improvements, while households classed as ‘low-income’ are eligible for a grant of up to £10,000, which can cover 100% of the cost of improvements.

Despite this, Charlie has ambitions to solidify the Retrofit Get-In project and offer more work and training. “We need a greater degree of security for everyone, a reliable pipeline of work and some funding to skill our workers up into a proper team to tackle what is a colossal future of work.”

He’s looking to apply for a grant from the Adult Education Budget to provide accredited training for his team.

“What we need is seed funding, the time and space to create a business plan, some support from local government so we can get on and grow.”

The success of Retrofit Get-In suggests there could also be opportunities for workers from other laid-off sectors, like travel and hospitality. Energy researcher Dr Faye Wade at the University of Edinburgh suggests: “Experts in consumer protection from these sectors could potentially combine their existing knowledge with new training on buildings and energy to work within retrofitting.”

Making homes fit for the future is an essential task if Manchester is to meet its zero-carbon targets. With projects like Retrofit Get-in, this goal is combined with a commitment to supporting workers in dignified and well paid green jobs.

“There is a huge skills base in the creative industry which we can harness to build back greener,” Andrew, the technician who founded the project, tells me.

You can hear Charlie Baker talk about Retrofit, Red Co-op and opportunities for a free recovery here on the Manchester Green New Deal Podcast.

Read more about retrofitting homes in Greater Manchester from the Meteor

This article was amended on Monday 16th November to provide clarification on the differential payments made to Green Homes Grant applicants .