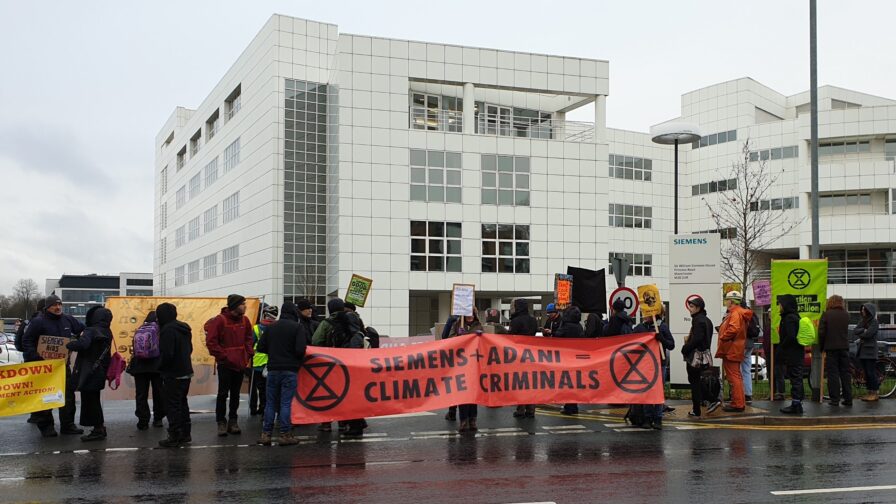 Manchester branch of Extinction Rebellion, demonstrate outside Siemens HQ in Manchester. Calling on them to quit the Adani coalmine project. Activists are invited in to talk by Siemens managers, but are not impressed by what they hear.

The main entrance to the Siemens UK headquarters in Manchester was blockaded this morning by Extinction Rebellion activists calling on the multinational firm to cancel a £15m contract to supply railway line infrastructure to the proposed Carmichael coalmine in Australia.

The controversial plan by the Adani Group to build the world’s biggest coalmine in Queensland has come under intense pressure from climate activists around the world acting in solidarity with Australians suffering the most destructive fire season in living memory. The fires have killed 28 people, over a billion animals and have burned an estimated 100,000 sq km of land, which is equivalent to 77% of the area of England.

The CEO and President of Siemens announced on 12 January that they were going to fulfil the contract with Adani and rejected calls from climate campaigners across the world, including Greta Thunberg, to pull out. He promised to set up an “effective Sustainability Board” to improve environmental care by the company.

The management at the Siemens UK regional HQ agreed to talk with two Extinction Rebellion protestors taking part in the demonstration in Manchester, who were asking Siemens to reconsider their decision. Zoe Cohen and Prof. Julia Steinberg were invited into the Siemens building to discuss their concerns about the Carmichael coalmine contract.

Steinberg is an Ecological Economics professor at the University of Leeds and a lead author for the Intergovernmental Panel on Climate Change. She said on emerging from the talks with two senior Siemens managers that they were keen to present their company as doing a lot of good work in helping the UK reduce its use of coal in electricity production. Steinberg went on to say:

“They said as far as this [Adani] decision was concerned if the company had to remake that decision they would make it differently… They felt that they could not back track out of it. So they have made this decision to carry forward this contract but in future they want to make sure this doesn’t happen again.”

The Siemens managers at Manchester told Steinberg and Cohen that Siemens were committed to creating a sustainability board that would prevent this type of decision being made again. Climate activists from Germany’s Friday for Future climate protests have previously been invited on to the board of Siemens companies involved in the Adani project, though the role was rejected by German climate activist Luisa Neubauer as it was not compatible with her activism.

Steinberger said that Siemens’ responses during their discussions were not good enough:

Everything about the planned Adani Carmichael mine is huge. Covering an area of 280 sq km, it would fill the distance between London and Manchester. It is estimated it will produce 60m tonnes of coal every year for 60 years. The project is likely to produce 4.7 billion tonnes of greenhouse gas emissions, which is equal to 0.5% of the remaining carbon budget globally to limit warming to less than 2 degrees centigrade. Its annual carbon emissions will be equivalent to the outputs of single countries such as Malaysia and Austria. 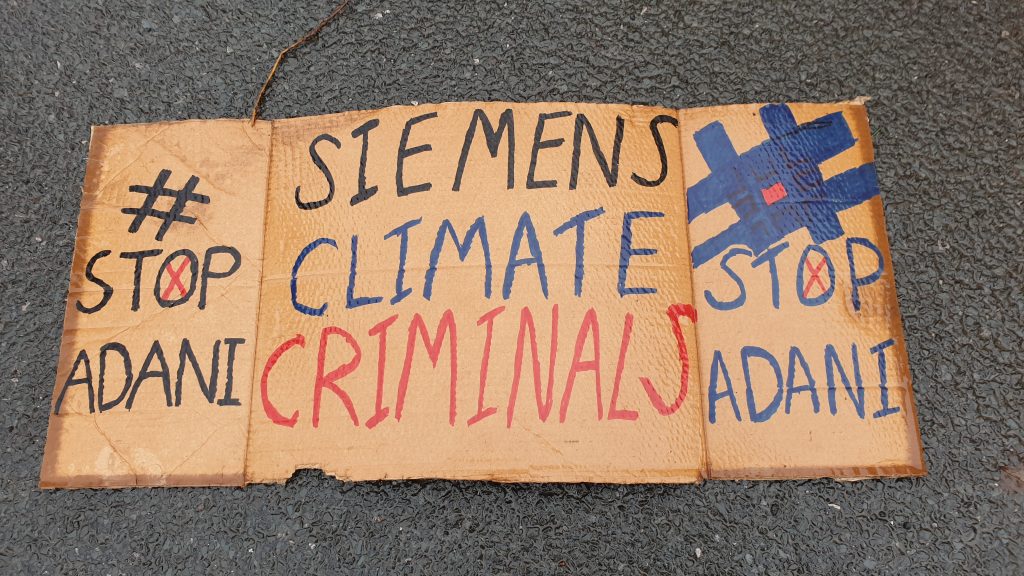 The unprecedented bushfires ravaging Australia have been linked to an exceptional heatwave, a phenomenon climate experts predict may be become all too common if we remain reliant on coal and other fossil fuels.

Cohen said that she had stressed Siemens’ responsible role during the meeting, saying after it:

“This is a question of leadership. A company like Siemens has the opportunity to speak up at a global level and fundamentally start to shift the corporate conversation. That alone could change the future of what corporations do globally. So businesses and CEOs the size of Siemens’ CEO start saying ‘you know, this is wrong: we ain’t going to do this anymore’.”

Cohen reported getting some “push back” from the managers when bringing up their responsible role which she thinks is due to:

“…fear… there is fear of change. Because there is so much change that must happen in big business.” Cohen also went on to say. “They talked about the enormous amount of carbon that has been avoided by the work that Siemens has done, but that has been undone by demand for fossil fuels which is dwarfing all renewable production.” 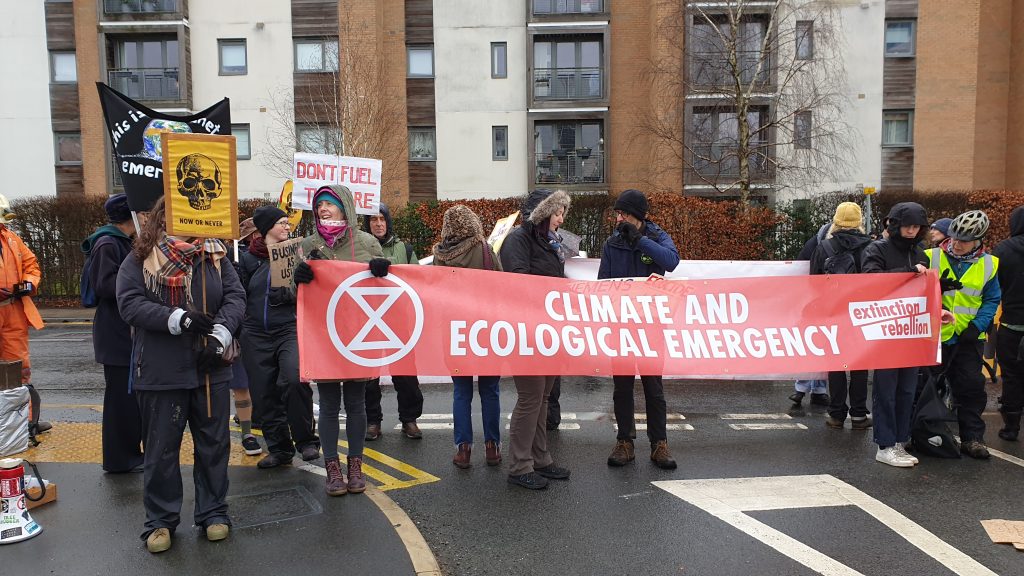 The protest in Manchester followed another Extinction Rebellion protest at Siemens’ office in London yesterday. Activists turned the Siemens building into a “crime scene” and branded Siemens “climate criminals”. On Monday there were also protests against Siemens involvement in the Adani coalmine project in Munich and Australia.

Extinction Rebellion activists demonstrating in Manchester vowed that this protest would continue and these promises were echoed by Steinberg, saying:

“This will not be forgotten: we are not letting this go, Adani coalmine is simply too big to allow to go forward. This is a line in the sand in Australia with all the climate impacts they have had. We can stop this. We can’t stop the Australian government, because they are completely complicit and corrupt. We can’t stop Adani because they are the coal industry. But we can stop the supply chain to those coal companies.”

There are two new coalmines planned in the UK, in Cumbria and Durham. Steinberg asked the Siemens managers whether they would sign supply contracts with these coal mines. Steinberg says the managers replied “absolutely not”, and believes that the current strategy of affecting supply lines to fossil fuel extracting companies could be influential in preventing further “climate destroying activities”.

Siemens were contacted today for comment about the Extinction Rebellion protest this morning outside the Siemens HQ at Sir William Siemens House, Princess Road, Manchester, but had not replied at time of publishing.