Podcast review of Mark Thomas in Check Up: Our NHS @ 70 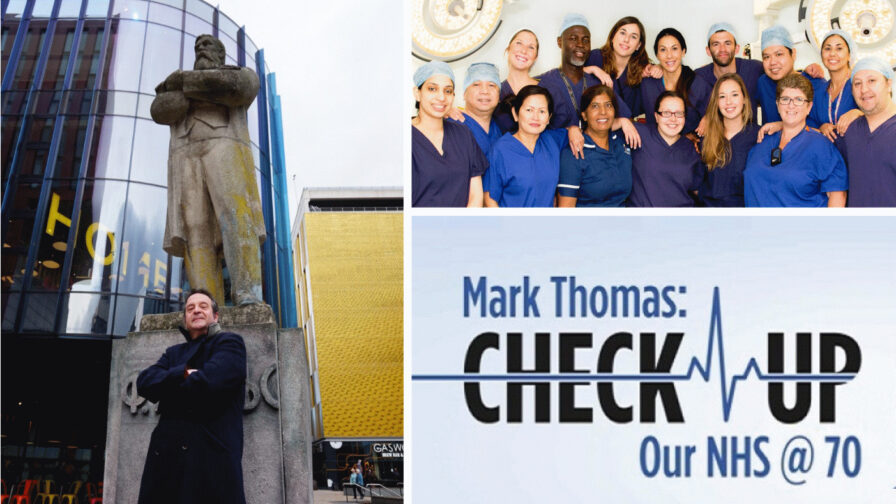 Mark Thomas is a comedian, political activist, investigative journalist and boasts of once being described as a ‘disgusting individual’ by former Lib Dem Leader David Steel. So when he came to Manchester for his latest show, ‘Check Up: Our NHS @ 70’, The Meteor jumped at the chance to check it out.

Thomas is well known in the left wing comedy scene, with previous projects including the crowdsourced stand up show ‘The People’s Manifesto’ and his year-long mission and resulting book  ‘100 acts of Minor Dissent’. Therefore it came as no surprise that his show both praised the socialist foundations of the NHS, championed the heroes of our health service’s frontline and disdainfully critiqued the institution’s systematic dismantling by recent governments’ austerity agendas.

After the show Meteor team members Alice, Conrad, James and Nicholas recorded an audio review of the show in the Briton’s Protection pub. Listen via the link below to find out what we thought of the show, and our reflections on the wider issues it touched upon. Warning – contains swearing:

What may come as a surprise to some is the range of voices brought into the room during this one-man show, and what they had to say. In his show, Thomas screened a number of interviews he had conducted with academics, politicians and healthcare professionals, including Chris Ham, the chief executive of The King’s Fund, who asserted that there had been “no benefit whatsoever” from the NHS’s creeping privatisation, which is costing us £2bn per year, and ex-health minister Frank Dobson who described PFI as his “biggest regret”.

Thomas has been touring this show all over the UK to a range of audiences, but in it he highlights issues that are relevant all over the country, such as the health inequalities that start as early as birth. He quotes Gordon Brown explaining that travelling a stop on the London underground equates to a year in life expectancy, due to the disparity in health dependent upon your post code. In Great Manchester, this has been mapped along our tram lines by the Manchester Institute for Collaborative Research on Ageing, showing a strong link between the economic deprivation level of an area and life expectancy.

The show will return to Greater Manchester on 2 April when Mark Thomas makes his way to the symbolic birthplace of the NHS, Trafford, to perform at Sale Waterside.

This project is supported by HOME Manchester’s Inspire scheme, which provides £1 theatre tickets to local community groups. Next month we will be reviewing ‘Kingdom’. If you would like to join us for this, please get in touch – you don’t need any experience, just an interest and willingness to get involved in a relaxed conversation after the show.

The last few remaining tickets for ‘Check Up: Our NHS @ 70’ at Sale Waterside can be purchased here.