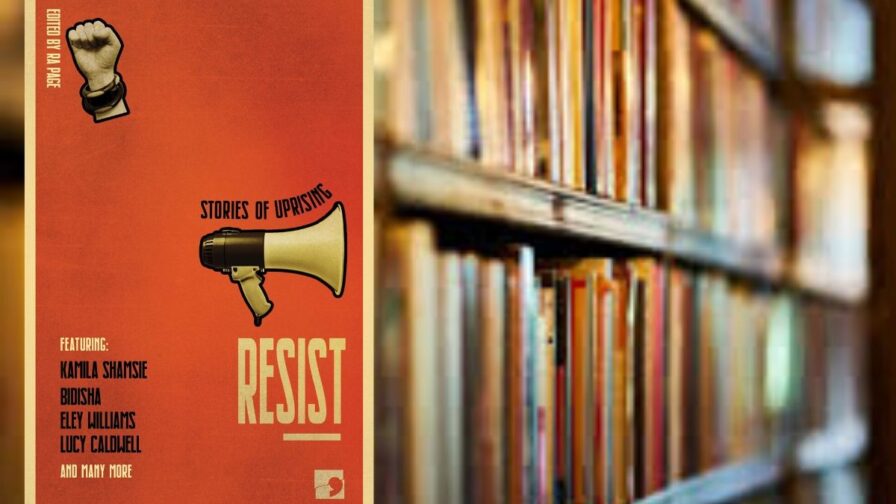 Days after publication, Manchester Literature Festival hosted the launch of Resist: Stories of Uprising. Following in the footsteps of its predecessor, Protest: Stories of Resistance, Comma Press’s latest anthology of short stories pairs writers with historians and activists to reimagine moments of British protest history – a history which has proven to be immense, with the anthology’s timeline spanning 2000 years from Boudica to Grenfell Tower.

Chaired by Ra Page, founder of Comma Press, the event saw contributing authors Irfan Master, Steve Chambers and Karline Smith read extracts from their stories and discuss their creative process and the power of their artform against a backdrop of resistance against the far right in contemporary society.

Irfan Master confessed himself as an activist who joins the fight through his writing. And although much of the event discussed how we currently find ourselves in such depressing times, the solidarity shown between authors and academics in producing this innovative and entertaining collection is in itself a show of resistance against a world which is mediated through the prism of a right wing press. Steve Chambers went further by suggesting ‘it’s about time we had some propaganda on the left’.

It seems that working class history has been lost from the modern day consciousness as Steve explained not many people had heard of the Battle of Cable Street when he mentioned he was writing a story about it. Similarly, Karline Smith’s story focussing on the Notting Hill Riots of 1958 has revived our collective memory of the origin of the world famous Notting Hill Carnival.

All three authors expressed how challenging the work was to complete, with Irfan Master admitting it was the hardest story he’d ever written. Irfan’s story focuses on the Southall Riots and the murder of Blair Peach which was covered up for over 30 years. Having not had testimony during all of this time, Irfan said writing this story made him feel he had to give Peach something in these words.

The power of prose was a hot topic throughout the event allowing Ra to explain more about the reasons behind his decision to compliment facts with fiction. ‘It was really important these were fiction because [when reading non-fiction] if you’re not a historian you can come away thinking that progress is inevitable and that’s a really dangerous and lazy point of view.’ He continued, ‘The idea of fiction is to put ourselves in the shoes of the character who doesn’t see the future and is prepared to risk their own life for the cause.’ Steve added, ‘We experience life emotionally so what fiction enables us to do is to feel the world as it was rather than just observe it like a diagram.’

Resist: Stories of Uprising is an open door to a neglected history – even for those who profess to champion its sentiment. When asked how to make sure these stories can reach further than the audience that already agrees with them it was clear that even amongst the friends of Ra and co. there is still ignorance to one’s own history.

What this powerful collection does is provide the country with a permanent book of reference to 2000 years of class struggle. This collection reminds us what truly makes this nation so great; when fascism has raised its ugly head there has always been overwhelming resistance against it. During a time of political division and rise of the far right, this generation may need to learn from their history and be ready to rise up to the occasion.