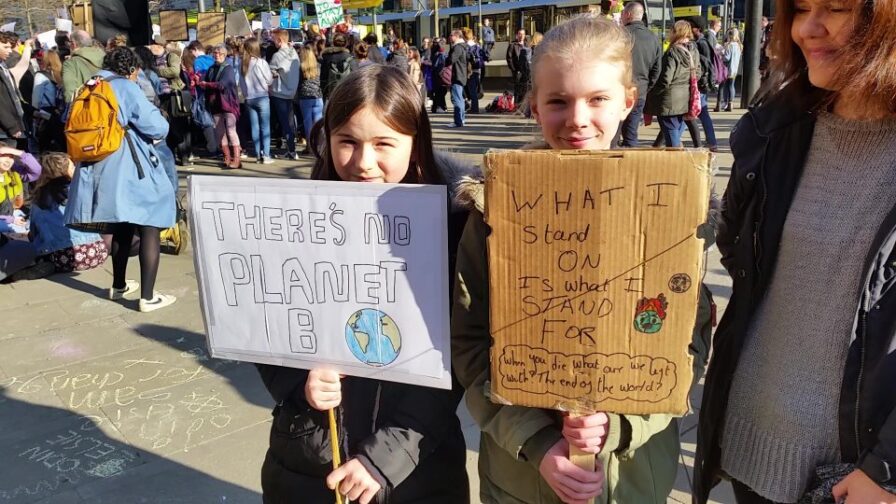 Youths in Manchester walked out of school and joined thousands of others across the UK, on 15 February, to demand action against the climate crisis. Hundreds of children gathered in St Peter’s Square in Manchester joined by parents, University students and seasoned climate campaigners, all critical of the government’s record in reducing CO2 emissions and protecting the environment.

Organisers of the national event, called Youth Strike 4 Climate, said that at least 60 towns and cities took part with at least 10,000 people attending. Some defying threats of detention by their schools to make their voice heard.

Attending the St Peter’s square action were two 11-year-old students of Chorlton High School, Esme Jennings and Frankie Hughes, who were accompanied by Jennings’ mother Jane Rajeck; all from Chorlton. Jennings expressed her concern over government inaction and inadequate media coverage of the climate crisis, saying:

“I am here because I think it is very important that we have to protest about climate change because the government isn’t doing anything and it’s a very big crisis. It’s very hard to understand why it is not all over the news and newspapers and everything when it is so big, and something needs to be done about it.”

Hughes, who was proudly carrying a placard saying “THERE’S NO PLANET B”, said she was here to:

“Make a difference about the environment and climate change, something needs to be done about it, and its not right that the government isn’t doing anything about it.”

St Peter’s Square was vibrant, filled with smiling faces and the voices of children discussing, singing and giving speeches concerning the climate crisis to those assembled – on an unusually warm sunny day for mid-February in Manchester. Rajeck explained that it was important that it was the children’s decision to come and that they should not be pressured into it by parents in any way, and went on to say:

“Today the children did want to come and I have come with them and am supporting them because I think they [the government] are not listening to adults, maybe they will listen to the next generation.”

Although Chorlton High School had not given official permission for the children to attend the action, Rajeck said she was told by the school authorities that no action would be taken against any children taking part.

Another proud parent in St Peter’s Square was Phil Korbel, director of the Carbon Literacy Project which aims to increase the public understanding of the issues surrounding climate change. Korbel said he was there because:

“I am a dad, this is really simple. This is about the future of every young person in this city or on the planet… I mean it’s a beautiful thing to see, self-propelled, self-organised. It’s really the start of something big I feel, it’s travelling and capturing people’s imagination in a fantastic way.

“I left home this morning with my eldest making banners with a bunch of her mates, nothing to do with me I hasten to add, and that’s a great feeling. She’s finding her voice about something that really matters to her and that does matter to her future.”

The Youth Strike 4 Climate was the first coordinated action in the UK inspired by Greta Thunberg’s school strike movement, which began in August 2018 when 15-year-old Thunberg held a solo protest outside parliament in Sweden. On 15 February tens of thousands marched in towns and cities across Europe, some for the six weeks in succession. It is estimated that 70,000 schoolchildren held Thunberg inspired protests globally. Thunberg’s momentous speech at the Katowice Climate Change Conference (COP24) in December last year, where she castigated the rich and powerful adults for their poor record on climate change, gave the campaign a huge boost.

Jennings was so impressed by Thunberg that she included a quote from her on her banner (see photo of Jennings above) and said. “Even though I don’t know her and she’s not from this country, I feel very proud of her for what she has done.” Hughes was also a firm fan, “she is amazing… and it’s so good that someone like her can send such a big message.”

It appears Thunberg’s message on climate change spans the generations as Korbel also praised her highly:

“Greta Thunberg is nothing short of a hero. There has been so much said about climate change over the decades and almost out of the blue she has crystallised the whole crushing urgency of the situation, and the duty on us to get our act together, in a way I have never seen anyone else do. Whenever I watch her speak, I get a lump in my throat, and I want everyone to see her. She is just extraordinary.”

If you missed this action and wanted to attend, don’t despair, there are undoubtedly going to be more. One group called Fridays for Future Manchester, who were at the Friday 15 February action, have been meeting outside the central library in Manchester every week for over two months. Other organisations at the event last Friday included Extinction Rebellion, Campaign against Climate Change and  Frack Free Greater Manchester.