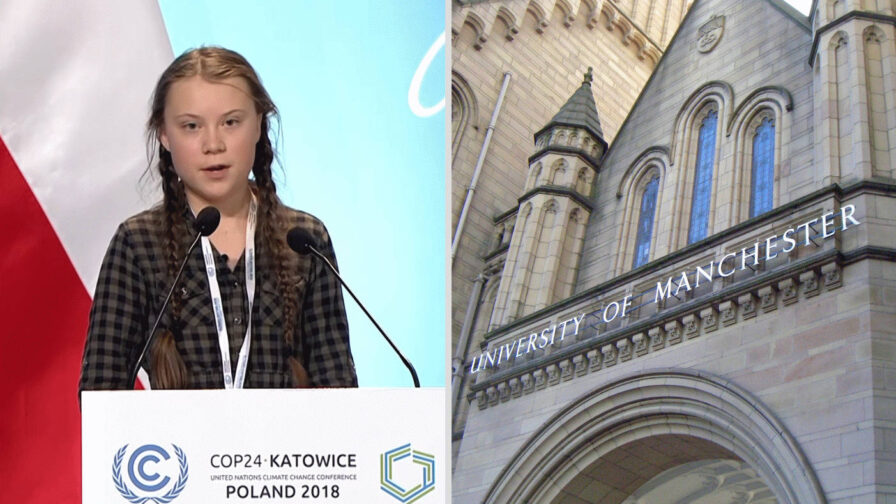 A school climate strike, a call to action against the climate crisis started by one young Swedish girl, is set to hit Manchester tomorrow as well as more than 50 other towns and cities in the UK. The action has received the backing of 224 academics, 12 of whom are from the University of Manchester, who published an open letter stating their solidarity with the children and “all those taking a stand for the future of the planet” on the day of action.

Since starting the strike on her own in August 2018, 16-year-old Greta Thunberg has seen her campaign spread first across Sweden and then the world. Last November an estimated 15,000 left their classrooms in over 30 locations in Australians. Belgium has seen a steadily growing number acting: on 10 January an estimated 3,000 young people called for climate action outside the European Parliament in Brussels. One week later 12,500 protested outside Parliament, the following week this grew to 32,000, with another 5,000 on the streets in other Belgian cities. Thunberg says to those wanting to get involved: “I would say that you are never too small to make a difference and that everyone can contribute in any way they can”.

The day of action across the UK is being called the Youth Strike 4 Climate, and in Manchester the action starts 15 February at 12 noon on St Peters Square, running until 2pm. Artwork concerning the climate crisis will be presented by younger children taking part to the Lord Mayor of Manchester. Older school students taking part will be joined by University of Manchester students marching from the University in support of the strike. Many of the children are backed by their parents in the protest.

Calum McFarlane, a Business Operations Manager from Hale Barns, says: “I’m taking my son out of school to help him begin to understand that he doesn’t have to sit by while the animals he loves and the places they live are destroyed”

Nine-year-old Lillia Adetoro from Failsworth expressed her worries about the future:
“…there is a possibility we won’t have one… I cannot just stand by and not take action when the world is dying around us”.

The open letter from academics in support of the campaign lists many aspects of the growing climate crisis causing increasing concern for humanity’s future. The heatwave across Europe in 2018 reduced crop harvests by one quarter; it was also the hottest year on record for England which experienced a number of serious wildfires in the North West. The combination of the rapid loss of sea ice in the Arctic due to ocean warming and the melting of land ice will result in rising sea levels and threaten highly populated coastal areas across the globe. The letter goes on to say:

“It is with these tragic and desperate events in mind that we offer our full support to the students… who bravely plan to strike on 15 February to demand that the UK government takes climate action. They have every right to be angry about the future that we shall bequeath to them, if proportionate and urgent action is not taken. We are inspired that our children, spurred on by the noble actions of Greta Thunberg and many other striking students all around the world, are making their voices heard.”

One of the 12 University of Manchester academics to sign the letter is Professor Kevin Anderson, Joint chair of Energy and Climate Change at Manchester and Uppsala Universities, and Deputy Director of the Tyndall Centre for Climate Change Research. Anderson has previously used Twitter to publically support Thunberg’s momentous speech at World Economic Forum in Davos last month where she urged World leaders to act, telling them:

Let’s lighten the load on @GretaThunberg ‘s shoulders. Use her speech as a call to arms and emulate her bravery. Call out the selfish & morally bereft at Davos, the subterfuge in politics, the cowardice & sychofancy in academia. But then let’s act with cogency, honesty & courage. https://t.co/AoNnJkjLsd

There has been a backlash against Thunberg and her campaign to combat climate change. Thunberg, who has Asperger’s Syndrome, has had to respond to media comments which she says contain untrue “rumours” and “enormous amounts of hate”. Some of those rumours were started by the Belgian environment minister Joke Schauvliege, who falsely claimed state agencies had proof that the school climate strike protests were set up by unnamed powers. He was forced to resign when his statements proved to be false.

“If people with power and influence don’t take action to drastically cut fossil fuel emissions, my daughter’s generation will be left facing the consequences of climate breakdown. The UN has said we have 12 years to act: my daughter will only just reach the age of voting by then. She has a right to demand action now.”

List of University of Manchester academics supporting the school climate strike, aka Youth Strike 4 Climate, on 15 February in the UK:

Remi Joseph-Salisbury, Presidential Fellow in Ethnicity and Inequalities, The University of Manchester

Kate Sapin, Manchester Institute of Education, The University of Manchester