Developers are turning our heritage into profit, and we’re paying them for the pleasure of it

Flats at Crusader Works, one of the largest surviving textile mills and new luxury property venture by Capital & Centric where one bedroom apartments are going for heady sums upwards of £189,000, are on sale again.

Since the project began the MEN has released a slew of articles gushing about how the development, on Chapeltown Street in East of the city centre, is being ‘kept back for people who want to live and work in Manchester’. But it seems odd that a development so generously reserved for ‘locals-only’ is priced to be unaffordable to the majority of Mancunians. It also begs the question why such a normally obvious statement is now used as some sort of cheery egalitarian advertisement for what is, to all intents and purposes, another set of luxury flats completely unaffordable to the overwhelming majority of the city?

When Adam Higgins, the Co-Owner of Capital & Centric can say: “We’ll be giving local people another opportunity to own a piece of Manchester’s history,” and nobody in either the newspapers or the council wants to pull him up on the fact that ‘local’ is entirely predicated on a sizeable personal income, should we not be taking such people to account when it is our cultural landmarks and heritage which is passing into their possession? 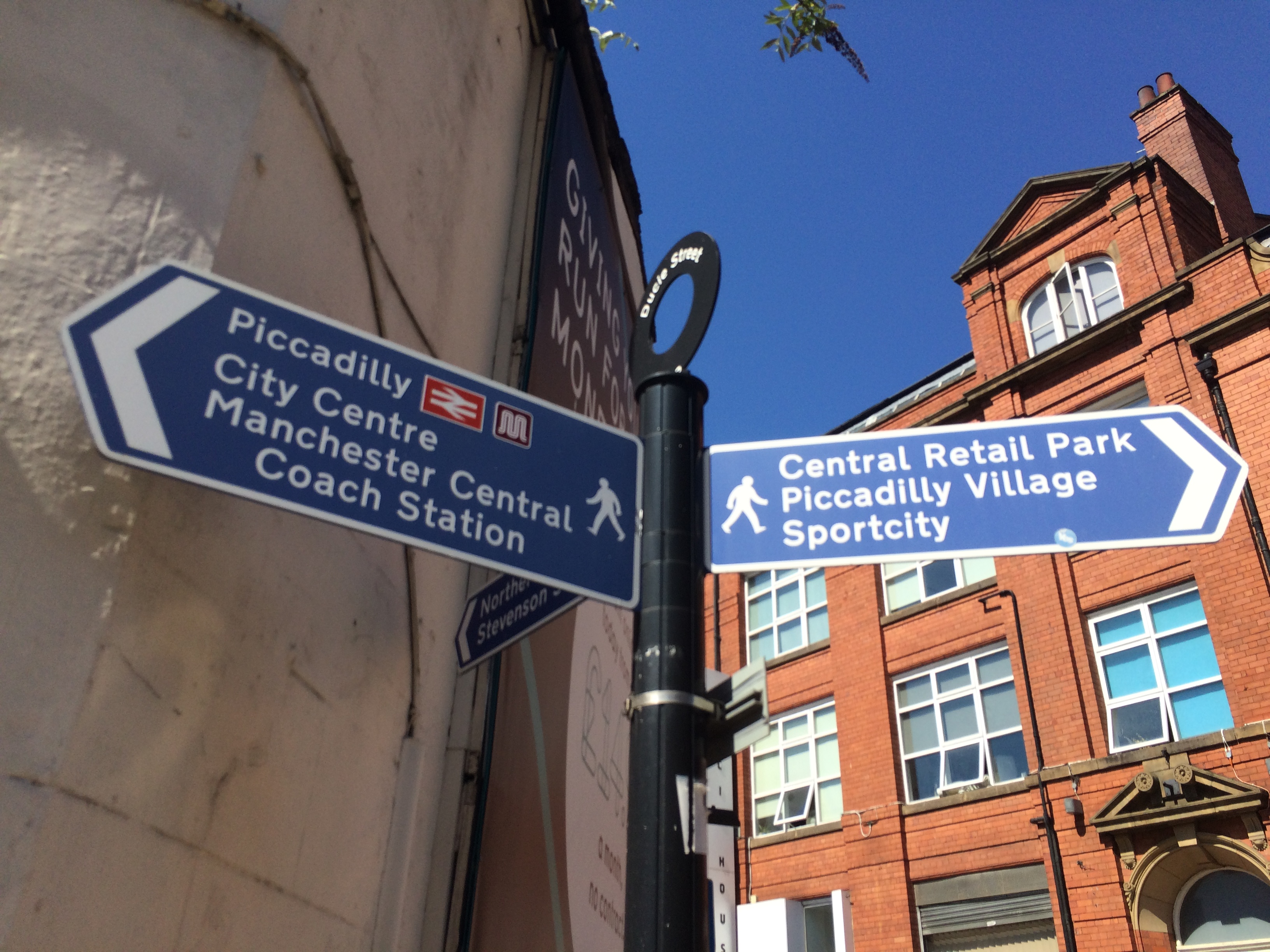 There is a fundamental question we need a decisive answer to: who deserves to be part of the redevelopment happening in Manchester? Because as it stands the regeneration of the city centre is creating a two tiered system where vast wealth is invested into the city centre, while there is a huge deficiency in affordable housing and community services from youth centres to Sure Start centres and Libraries.

The focus on high density tall developments follows a ‘trickle down’ understanding of how our economy should work. That if the city can attract market based transformation of urban space in turn attracting new companies and jobs, housing development being one of these, it will attract new flows of finance. It goes that richer residents will contribute more in Council Tax and in turn will benefit the city.

However, the methods used to encourage this have been the systematic ditching of responsibilities to build affordable housing within new developments, and the reduction of Section 106 payments, which are intended to mitigate the impact of such developments by providing local services and environmental improvements.

Under the current UK planning system it advises that as part of all new developments, 20% should be affordable. It’s now common across the UK for Local Authorities to forego this suggestion. A report titled ‘From Homes to Assets’ compiled by Jonathan Silver of Greater Manchester Housing Action and reported by the Meteor discovered the shameful record both Manchester and Salford Councils have on enforcing their own rules:

The project at Crusader works is just another example of developers working hand in hand with Local Government. In July last year GMCA wrote Capital & Centric (C&C) a loan of £25.5 million for the conversion and extension of the grade two-listed Crusader Mill into 201 apartments.

However after conducting a viability assessment C & C decided that they could not afford to include any affordable housing within the development.

In the case of Crusader Works there is no record of a Section 106 agreement in the council’s Resources and Governance Scrutiny Committee reports, the arm of the council responsible for auditing the arrangements so either an agreement is somehow being kept under wraps, or the council hasn’t bothered to enforce its own procedures allowing C&C already flushed with a public loan, off scot-free.

John Moffat, C&C’s development director when receiving the loan had the audacity to say “This is ultimately the people’s money we’re borrowing, therefore we owe it to Manchester to deliver something special,” but in the end he’s only providing an opportunity for the wealthy to own pieces of institutions they had no hand in making.

The frustration of developments like Crusader Works is that they utilise the vestiges of working class culture and industrial architecture but their motive is to profit. Their investments will fundamentally never be for those without the capital to be customers.

It’s not just the issue of social housing. These mills have a symbolic significance, they were built up by the labour of working people during the 19th century, earning the city a worldwide reputation and the nick name ‘Cottonopolis’. However with the globalisation of production a catastrophic process of deindustrialisation occurred. These institutions of employment were closed ejecting secure communities into economic insecurity. Now, due to an economic recovery of sorts they are being reopened, and with loans from public institutions are being furnished as luxury housing for the rich. Is it not grimly ironic that now that it has returned to a better level of prosperity, the development strategy of Manchester City Council focuses on accommodating their every need at the expense of the majority of the city’s residents?

These remainders of industry are iconic signifiers of the city’s fortunes. Manchester was made by textile industry and when they closed, the city correspondingly declined. But in the regrowth and rebirth of post-crash Manchester it is time the money we see poured into skyscrapers and luxury flats was put to work for the majority of people who call the city home.

With bus services slashed by Stagecoach and First the council has the audacity to rationalise the privatisation of the city centre with Ardwick Councillor Bernard Priest using the excuse that most people “don’t necessarily need to live in the city centre to have easy and convenient access to its amenities,”. It smacks of ignorance in the way that such a system of development will inevitably create a two track system of a wealthy inner city ringed with poor communities who service them.

The redevelopment is producing unbalanced communities without neighbourhoods, diverse incomes or tenure and with a council unconcerned with standing up for those without the funds to stay in the city centre. This segregation is made even more ludicrous when billions of pounds are being invested minutes away from the neighbouring wards of Ancoats and Clayton, Miles Platting and Newton Heath which rank in the top 5% of the most income deprived wards in the country.

While for some the rebirth of Manchester has benefitted them, for the communities culturally descendant of those who worked in these factories, creating the culture and the city in the process, change has been damaging. Old neighbourhoods are being acquired and morphed out of their hands by the vagaries of land pricing and ground rents while landlords have called time on community stalwarts such as The Shamrock on Bengal Street, which, surviving 200 years of tremendous change, great recessions and revivals is finally being felled by a scrum of cranes. The end of a much loved and enduring community institution is sound-tracked by the drone of development.

Other losses include Linda’s Pantry, one of the few remaining ‘greasy spoons’ left in the city centre and a favourite of builders working on the re-development of Piccadilly Basin. Its lease was called in last year with the landlord eyeing it for new flats. I spoke to Linda the day before it closed, she was saddened but resigned: “It’s a shame to go but since the redevelopment kicked off we knew we eventually wouldn’t have a place in it.” The Cafe opened in the late 80s servicing locals and workers in the rag trade when the area was still alive with industry. “This whole area used to be textiles. Plenty of derelict houses but also pubs, plenty of life.”

The frustration in watching this progressing redevelopment is the way in which it is swallowing cultural institutions and historic local landmarks and replacing them with, well nothing. They provide an essential diversification of use in the clinical terms of city planning, but in reality they furnish neighbourhoods with colour and identity. The loss of these local assets is a tragedy but also a short sighted choice by landowners who can only see their monetary value. They are linchpins around which people interact and form communities, without them there is just the job, the home and the roads and buses in between.

Developers beam at brilliant new schemes like ‘micro-flats’ where £120,000 will bag you as little as 30 sq m, the size of four prison cells at HMP Strangeways. This trend of shrinking housing to make them more affordable looks to be gathering pace as Sadiq Khan, the London Mayor gave a £25m loan to fund tiny starter homes. We already build the smallest homes in Europe and this move to institutionalise and extend the practice will allow the property speculators to build smaller, risking nothing in the process because desperate government loans will always prop them up.

The Worker Bee should be an egalitarian symbol. The city should be for everyone, not just those with the money for an overpriced apartment and we shouldn’t be doffing our collective caps to a clique of developers, who, when it comes down to it don’t pay their share anyway.

But it is the atomised nature of modern city living which is the most depressing. When we hear that loneliness is becoming ‘Britains Most Lethal Condition’ among the older generation we need to see that the forms of this redevelopment will only segregate the city up into rich and poor, all the while erasing the culture and individuality of the areas we want to see renewed.