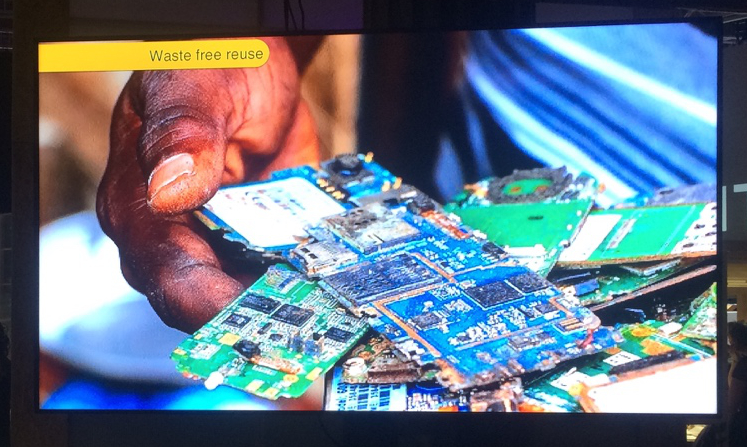 Lush looks to implement its ethical approach to buying raw materials for its cosmetics range into technology projects, to avoid producing toxic electronic waste. Where Lush leads others may follow and help reduce the global burden of e-waste, which particularly affects certain African countries such as Ghana, where a lot e-waste is dumped. The interview in this article took place at this years Lush Summit:

The Meteor spoke to Gabbi Loedolff, Head of Raw Materials and Safe Synthetic Sourcing at Lush, in the relatively quiet Campaigns Room amid the hustle and bustle of the Lush Summit 2018. She was busy preparing to chair another panel talk at the summit but managed to answer our questions about some of the projects she is currently working on.

Over her 15 year career at Lush, Loedolff has gone from being a retail manager to delivering the launch of the Lush Charity Pot. She now oversees the buying of raw materials and safe synthetics for Lush UK and Europe. The supply chain approach at Lush is described as ‘creative buying’, which looks beyond the bottom line, and integrates ethical considerations into the decision to buy. As a creative buyer, Loedolff explained how Lush’s approach to buying is looking to move beyond ‘sustainable’ buying towards ‘regenerative’ buying, which creates systems that give back more than they take.Although primarily known for their cosmetics, Lush is also investigating the ethical production of electronic hardware through creative buying.

Could you tell us about Lush’s ethical sourcing of resources, particularly in regard to technology?

We’re exploring whether we can incorporate all of the ethics that are so core to our business, so that’s the traceability, the environmental impact, the social impact, through to anything that we buy. We’re making sure that we’re trying to have a regenerative effect environmentally and socially, and asking can we transfer that to something as complex as hardware? Is it possible for us to create an electronic tablet [akin to an iPad] that can have the traceability in the components, incorporating from the sourcing of it to the way that it’s manufactured and assembled? Working with companies that have social practices that we believe in, that have the same environmental care and consideration, to create something that is more modular, something that is easy to repair. It’s very much at the planning and discussion stage at the moment, but what we’d love to do is end up in a situation where we’ve actually managed to manufacture a bespoke tablet that we can use in our stores as a starting point with our till systems.

Do you see it as a responsibility for all big companies to incubate interesting ethical technologies like this, which may be at an unattractive price point to the consumer?

I don’t necessarily think that ethical considerations or designing something that is more robust or repairable or has a longer life span needs to be necessarily more expensive, I think it is about the care and consideration that goes into it. If you look at the price over the lifespan of a gadget, and look at the price per year, having something that might cost a little bit more in the beginning, but lasts you a lot longer before you have to replace it, then economically it makes sense. I think all corporations or companies should think about it, absolutely; I don’t think we’re there yet, I think it’s very much something we’re moving towards, with consciousness and awareness and questions from consumers as well. This links very well to e-waste as well because I think that’s the next big focus. People are becoming very much more aware of electronic waste, and where do things actually go at the end of their life? What is the embedded value in any of the hardware that you’re disposing of?

There are some manufacturers of hardware that are certainly already doing a lot more on their own supply chains in creating a bit more transparency, that are also looking more at their labour practice. A lot of these things are driven by consumer demand, driven by companies being held accountable as well and being asked those questions.

Do you feel that there’s a need for the education of the consumer as well?

I think businesses like Lush or any other business really has an amazing opportunity to provide a platform to share information with people. Not to tell people what is right or wrong necessarily, but to provide a platform effectively to share some of the challenges surrounding any of the materials, whether it’s ingredients, whether it’s hardware, whatever it might be, and to communicate with our consumers to help with the education, but yeah, education is crucial.

I think part of education is focusing on the positive solutions that are out there as well, because inevitably, there are already people out there doing really important work on the ground that are finding ways to deal with any of these challenges and that it’s escalating those.

What part do you think that social media has to play in sharing such information?

I think that social media has sped up the learning curve drastically. It’s a much easier way to get messages out and for people to interact with and to relate to in their own preferred setting as well. It’s much easier via social media and the internet in general to find a whole host of different perspectives on things so that you can formulate your own views.

Would it be helpful to work with Google and other software companies in order to slow down the process of obsoletion in apps and hardware?

There certainly is a strong argument for a wider scale collaboration to try and just take a step back for review and see how software links into the hardware approach as well. We’re very much focused on using open source technology, and anything that we’re developing as well, looking to make sure that we’re sharing that out as well. So not holding everything close to our chests. There’ll be some intellectual property of course that might be crucial to us, like the secret recipe for something, but by and large we’re huge supporters of open source.

Have you been on any interesting visits to factories or recycling plants recently?

I went to Ghana in January, to Agbogbloshie, an informal settlement, often referred to as ‘Africa’s biggest E-waste dump.’ There’s a lot of sensationalist articles and reporting that has been done about it, images of kids burning wires, etc. I actually went to see the reality of it, and to see in countries where they don’t have more formalised electronic recycling systems, how are people dealing with it? What are the challenges? Are there any people doing any really interesting work on the ground, to address the health and safety issues, the environmental impact? There’s an economic reality to it as well, people are making a living out of dealing with electronic waste. So that was hugely educational, and it’s helping to inform our thinking on how we address e-waste as well, not just through the design of any hardware that we’re creating, but across the business.

What other projects are you working on that you’re excited about?

The other thing that we’re working on right now is also exploring blockchain and what that could mean for us as an organisation, and for our supply chains as well. How do you utilise blockchain to create that complete transparency for the story telling? Also, we’re really focused on regenerative agriculture, could we do the environmental social economic regeneration? Then how do you verify that beyond just the green washing that a lot of companies do? People are so used to hearing ‘oh we’re doing great stuff,’ but how do you provide that transparency and the trust in people that you are doing what you’re saying? Blockchain is hugely exciting for that as well.

There’s a group that is going to be launching publicly later this year called Regen-Network, and what they’re doing is actually looking to generate a currency to incentivise farmers and stakeholders around the world to adopt regenerative agriculture. So, generating more currency through carbon sink technology. They’re finding ways using satellite imagery and other data, for instance soil analysis, to prove that carbon is being drawn from the atmosphere and that is then what drives the generation of the currency.