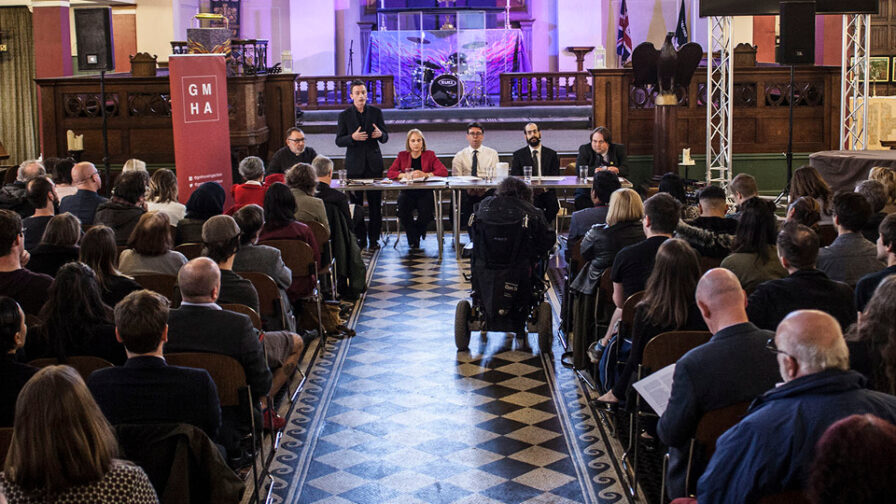 Mayoral candidates for Greater Manchester (GM) were left in no doubt about the dire effects of the housing crisis on its citizens at a hustings to discuss the issue. The panel were bombarded with questions and statements, often with distressing accounts of individual cases, over a broad range of issues including poor housing conditions, the bedroom tax, lack of affordable housing, rising rents and homelessness.

The packed event held by Greater Manchester Housing Action at St Philips Chapel in Salford on the 3 April saw the candidates having to navigate through protestors against the high levels of homelessness and poor housing provision in GM who were stood outside the venue. The candidates on the panel were Andy Burnham for Labour, Sean Anstee for the Conservatives, Shneur Odze for Ukip, Jane Brophy for the Liberal Democrats and Will Patterson for the Green Party.

The meeting started civilly enough but tempers began to fray and pent-up frustration about the inequities of the housing crisis became a full throated roar from the public as the two candidates of parties in power locally and nationally spoke. The first question asked of the candidates by the chair of the panel was what they would do, if elected, to address Greater Manchester’s housing and homelessness problem.

Patterson for the Greens was first to answer:

“We need to start from a basic principle, a very clear target, which is a roof over every head. Because it is a travesty of justice that in this city we have elected politicians championing the construction of luxury high rises while doing so little for those sleeping on the streets beneath them. And so whoever is elected mayor has to change that set of priorities and start working for those that need the help most.”

Patterson went on to describe how empty buildings should be used to house the homeless across Greater Manchester, and that a better way of understanding the size of the problem was needed because:

Stating his opposition to the current Greater Manchester Spatial Framework (GMSF, a 20 year plan for allocating land for housing and industrial use) Patterson said he would change it to deliver the housing that is actually needed in GM. Nearly a quarter of the young homeless community identify as LGBTQ, and he promised extra support for vulnerable groups such as theseHe also pledged his support for those affected by domestic violence and for a policy known as Housing First (previously covered in The Meteor here) which gives long-term homeless people a secure tenancy first, giving them a base to deal with any other complex social problems they have.

Odze for Ukip was up next, concentrating on improvements to housing associations which he favoured over big private housing developers, saying that there should be a:

“Focus first and foremost on housing associations, to charge them with being more transparent and engaging. If you can go months on end without your boiler being repaired but you fall behind two weeks in your rent and you’re soon getting a rent notice from your housing association and a few weeks later an eviction notice, that can’t be right.”

Odze stated his support for tackling all forms of homelessness and also commented on the financial activities of the previous MCC chief executive Sir Howard Bernstein saying that one of his last acts in the position was:

“Transferring another £100m to the private housing sector, when corporate housebuilders are some of the best performers on the stock market, yet the availability of houses in the inner city has only got more desperate.”

Andy Burnham rose to the loudest applause and cries of support from the crowd which was unsurprisingly well populated by Labour supporters. He painted a bleak picture of the housing crisis destined to get worse under current national government policies, including the recent removal of housing benefit entitlement for 18-21 year olds. He also criticised the previous use of the £300m GM Housing Fund, and the GMSF saying:

“We have been using this new fund that’s come from devolution to build exclusive luxury flats in the city centre, and also when it comes to the planning system of the GM Spatial Framework there has been a very developer-led process that is all about identifying sites off the East Lancs, and building large executive commuter homes. Neither of those two policies of flats in the city centre or those big commuter homes will solve the housing crisis in GM.”

Burnham committed to “an affordable home for everyone, to rent or to own, with no one forced to sleep rough on our streets”, and proposed a five point plan to deliver that promise:

1 – Build more council and social housing in all ten boroughs of GM, andrefocussing the GM Housing Fund to that specific purpose.

2 – Help more young people onto the housing ladder, building more homes that are rent-to-own so that young people can have a legitimate expectation that they can own their own home later in life.

4 – Rewrite the GMSF to rebalance it away from building on big green belt sites, and towards revitalising the town centres of GM with higher density development.

5 – End rough sleeping in GM by 2020. A dedicated team was announced that will drive new ways of tackling the problem by co-ordinating organisations across GM that wish to contribute. Burnham will donate 15% of his mayoral salary on an ongoing basis to create a new Mayors homelessness fund as an example for others to follow.

The Liberal Democrat candidate Jane Brophy was next up, saying that she cared passionately about GM which needed “affordable, safe and secure housing for all”.

She emphasized that good homes needed to be linked to good education, health services and a vibrant economy to fund the delivery of it all. Brophy also stated her opposition to the GMSF because it didn’t deliver affordable housing and was likely to produce big expensive homes, costing over £300,000, on green belt land that ordinary people could not afford.

On homelessness she was keen to tackle the underlying causes, which she had experience of due to her work in public health, saying:

“Those root causes are things like mental health problems, drugs and alcohol problems, social problems; it might be domestic violence, it might be people leaving prison. Unless we actually address those wider social problems, unless we actually address those determinants of health and wellbeing that aren’t being addressed at the moment we are not going to reach out and make things better for people who are rough sleepers.”

The civil nature of the event began to deteriorate when the first mumblings of discontent were heard from the public as Conservative candidate Sean Anstee spoke.

As Head of Trafford City Council, he played a key part in setting up the devolution deal between the majority Labour-led local authorities of GM and the Tory ministers behind the plan. Optimistic about the new powers being devolved and their potential for change, he said:

“I think in order to be able to tackle the affordable housing crisis in the city region and the fact that we have people who are homeless and rough sleeping, we have got to create the environment using the new powers that are coming to GM that acknowledge that whether it is poverty caused through worklessness, whether it is poor educational achievement or poor health outcomes, all of them are contributing towards some people feeling that they are being left behind, that they are not able to get on.”

Anstee was the only candidate to express his support for the current GMSF and also sang the praises of the GM Housing Fund saying that it had “kick started building on brown field sites, getting urban sites regenerated”. He also pledged a new £1bn to the GM Housing Fund by combining funding sources available from government agencies. He also expressed the need for a wide range of housing across GM, which elicited some unbelieving comments from the public.

The people of Salford have good reason to be wary of and angered by politicians uttering platitudes. Salford scores highly on levels of deprivation, in the UK and so its people have been harder hit than most by Conservative austerity driven cuts to social security and local services due to more people in the area needing them. At the same time it has been subject to the building of expensive housing developments with the subsequent loss of social housing which has been referred to as a policy of “social cleansing” (p18-19) by the Salford Star. Another report shows that this loss of social housing is not only present in Salford but common across GM, with only 164 ‘affordable homes’ being built (only 20% of these, 33 homes, were for affordable rent) by private developers in 2015-16 through Section 106 agreements. It was the Conservative Liberal Democrat coalition government that introduced a viability assessment into Section 106 agreements which allowed developers to wriggle out of their obligations to build affordable housing and pay local authorities for infrastructure to support the developments.

Anstee received considerable vocal opposition from the audience when saying “we need affordable homes… but we also need homes for people to be aspirational as well”. But the fury of the audience was really ignited after a question from an anti-bedroom tax campaigner when Anstee was the only member of the panel who did not wish to abolish the tax, and was forced into silence while trying to defend his stance by the level of barracking emerging from the audience.

As the representative of the Labour Party, Andy Burnham also came under fire from the audience over the performance of the Labour led local authorities in their housing policies. After Burnham had answered a question about the gentrification and lack of affordable homes in Ordsall, homelessness campaigner Chris Blaine made an impassioned statement, building in volume and anger as it progressed:

“You’ve carried on and carried on and haven’t stopped; now you’re stood here in front of us all giving us blurb we don’t need, we need actions that can be taken today. There’s children dying in doorways and you’re sat there giving a load of PR blurb. Get off your backsides… and do something about it…” There were cheers and applause from the majority of the crowd during Blaine’s heartfelt plea to the next mayor of GM.

The first of many battles

As all the candidates acknowledged, the housing crisis is a complex multi-faceted problem that is going to require a lot of work and resources to solve. The current favourite to win the mayoral election, Andy Burnham with odds of 1/6, showed his political and election experience with his concise 5 point plan to tackle the housing crisis and requesting the audience to vote for him on the 4 of May on a number of occasions; something the other candidates failed to do. Patterson for the Greens also got a lot of positive responses from the crowd on his stance to the many issues raised during the debate. The levels of cynicism were understandably high in the questions and comments pitched to the panel members, but as Patterson pointed out it is “our job to end the cynicism, not yours”.

Whoever wins the mayoral election on 4 May 2017 will have many more battles to face after that to really turn around the housing and homelessness situation in GM. The next mayor will have to fight for greater devolved power and more funding from central government if any headway is to be made, and local authorities will have to be convinced to change their current housing strategies which are failing an ever increasing number of citizens in Greater Manchester.