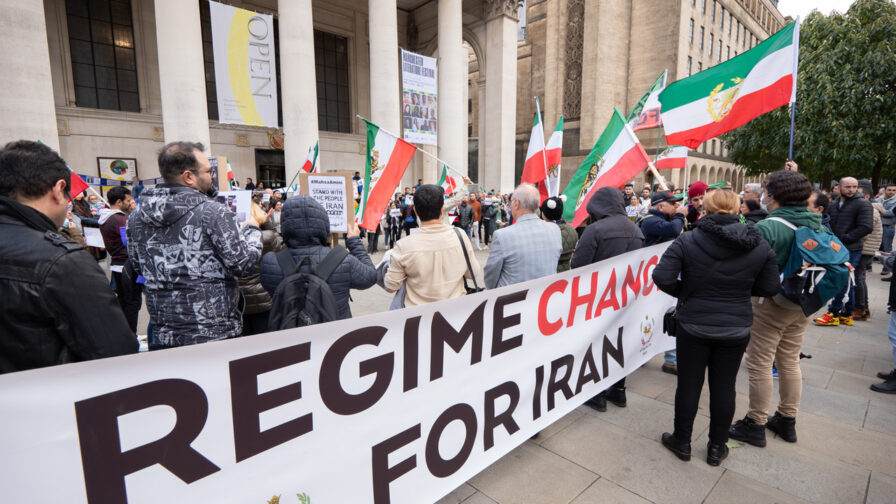 Human rights defenders protested in Manchester city centre on 1 October over the killing of Mahsa Amini, a woman arrested and beaten by Iran's 'morality police' for wearing her headscarf in a way that exposed her hair.

On Saturday 1 October a crowd, numbering a few hundred, gathered in St Peter’s Square, Manchester, to protest following the death of Mahsa Amini, a 22-year-old Iranian Kurdish woman in Iran.

Mahsa was arrested on 13 September by the ‘morality police‘ for the ‘crime’ of wearing her hijab loose. On 16 September 2022, Mahsa Amini, who was beaten whilst in detention, passed away. The Iranian authorities have denied that Mahsa was beaten in custody, blaming her death on pre-existing medical conditions. In addition some commentators, sympathetic to the Iranian regime, are accusing the western media of utilising the story to promote anti-Iranian sentiment.

However, as more evidence and eyewitness statements have emerged, social media posts and public protests have spread both in Iran and globally.

“There are protests all around the world, in many cities and small towns, organised by Iranian diasporas to support the Iranian people inside Iran.”

Dorreh, a Ph.D candidate in Cultural and Media Studies (Women and Social Media) describes the reasons for people’s anger:

“The evidence, scan of her head and bleeding from her ear, shows that she had a head injury caused by beating against a heavy object. The Iranian government denied any beating and tried to say Mahsa was sick and she had a heart attack. Mahsa’s family rejected this statement and said Mahsa was a healthy woman, and other women who were arrested with Mahsa stated Mahsa was beaten whilst being taken out of the police van. People took to the streets of Iran, starting from Saqez, the city Mahsa was from, seeking justice for Mahsa and protesting against the compulsory hijab.”

“Current events in Iran are surely very concerning to all human rights activists around the world. Manchester is a city with a substantial Iranian population and a proud history of supporting human rights, so it seems natural to us that the people of Manchester would want to speak out about these terrible events.”

Alison continues to outline how Amnesty International are pressing for change:

“Amnesty International UK has taken a keen interest in events in Iran. On 30 September Amnesty International produced a report detailing the brutal way in which the authorities had dealt with the protests up to that point, including many unlawful killings. Amnesty is calling for member states of the UN Human Rights Council to establish an international investigative and accountability mechanism. This would ensure that evidence of serious crimes under international law is accurately documented and preserved to enable prosecution of those who have committed criminal acts.”

Despite the global and internal Iranian protests, including a strong condemnation from the United Nations, the Iranian security forces are continuing with a hardline approach to dealing with protestors on home soil.

Lecturer Dorreh Khatibi-Hill holds out little hope for change via negotiation with the existing Iranian regime:

“How can we speak or negotiate with a government, a system, that uses bullets on peaceful protesters?” she asks.

“The security police have started to shoot, beat and arrest children as young as seven. Two 16 year old girls were killed by the security police during the protests and the government forced and threatened their family to come on national TV and to falsely confess their children committed suicide. The security police have been arresting and beating schoolgirls who started to chant and protest inside their schools. The education secretary stated that schoolgirls who are arrested, are kept in a psychology centre, an institution, so that psychologists can modify their behaviour and integrate them back to school.

“How can anyone in the right state of mind, want to negotiate with this theocratic regime?”

It can often seem a hopeless task for individuals in a foreign land to influence overseas regimes, particularly authoritarian regimes such as that in Iran. However, Dorreh Khatibi-Hill urges the people of Manchester and further afield to help support those pushing for change.

“People in Manchester and all over the UK can find out about the protests in their city and to attend the protest to show solidarity with Iranian women.

“People can also just simply retweet, repost and share the content on social media about the protests in Iran, to amplify the voice of Iranian women and people. The press and mainstream media don’t speak enough about what is happening in Iran, which is said to be the biggest women’s revolution in the world. If people keep speaking up about this and use the hashtag #mahsaamini to bring more attention to this issue, the mainstream media will also pick up on this.”

Khatibi-Hill also urges people to be proactive in motivating the United Kingdom government:

“People in the UK can also write to their MP and ask them to take a stance and show solidarity with people in Iran.”

As Khatibi-Hill says, and the crowd in Manchester’s St Peter’s Square showed, this is not just about compulsory wearing of the hijab and the rights of Iranian women.

“Men have realised their freedom is intertwined with women’s freedom.”

Petitions in support of change in Iran:

Killing and arresting students in Iran, as young as 16 years old, must be urgently stopped – Change.org