“Let’s change the world together!” 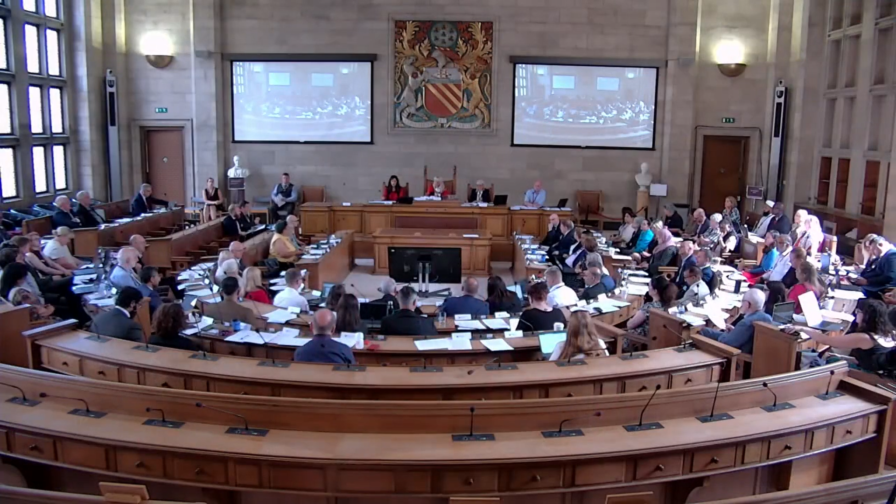 The Meteor spoke with ward councillor for Hulme, Annette Wright, about declaring a climate emergency in 2019, and the council processes that were needed to make it happen.

These were my final words in July 2019, when I moved the motion for Manchester City Council to declare a Climate Emergency, instructing it to increase, accelerate and embed its climate actions. No local authority can solve global problems, but an influential city can set an example and our Mancunian desire to want to be the best might just help pressure the tiny number of rich and powerful countries and companies to change their behaviour — and give future generations a planet to live on.

The atmosphere that day was electric. The room was packed with children, terrified for their futures but excited at seeing change, alongside campaigners from Extinction Rebellion and Friends of the Earth, with political representation from the far left to the Liberal Democrats. We had commonality of interest much bigger than party politics or individual egos; I accepted an amendment from the opposition, and we were on our way.

I’ve made many speeches, but I can’t remember an audience paying closer attention or responding more generously when I had finished. I was followed by Chorlton councillor Eve Holt, who I had asked to second the motion, clearly spelling out the urgency of the situation, followed by more councillors all speaking passionately about the subject.

I was offered a right of reply, but thought it unnecessary. Everyone had smashed it. The motion was carried unanimously, we had our policy. I went to the café for a cuppa and was recognised there as the councillor who’d “just declared the climate emergency”. I don’t claim that this was the political event of the century, but I do think it was inspiring and memorable for anyone paying attention.

My motion didn’t write itself.  It required collaboration with many campaigning groups, councillors and most significantly for me, Hulme residents whose concern and knowledge about climate issues turned this trade unionist into a hopefully decent climate activist, very quickly.  I drafted and re-drafted, added and reworded, and used a smaller font to fit the motion on the form. At times I asserted in no uncertain terms, that this backbench motion would be on the council’s agenda even if that meant me having opposition. In the end, I secured the commitment of everyone from the then-Leader down.

Climate Emergency UK, a national, non-party political organisation, has found Manchester to be top of the list of UK local authorities when measured against a range of indicators, including mitigation, engagement, measuring emissions, education, diversity and inclusion. The Labour Council produced its first climate action plan long before my time, in 2009, and it works with partners like the Tyndall Centre for Climate Change Research, which has an international reputation for independent science-based advice.

Anyone who tells you they are doing enough about the Climate Emergency is really failing to grasp the desperate urgency of the situation. But it is disingenuous to suggest that there is some unspecified “overwhelming evidence” of Manchester failing “on a regular basis” without acknowledging how much work has been done and how we compare with other areas. The way the Council reached this position  is complex and possibly rather boring, including as it does, reorganisations of local authority bureaucracy and the workings of council committees. For me, it has taken huge amounts of time, doggedness and a lot of learning.

And then the work started. Following a great campaign by Climate Emergency Manchester we now have a dedicated Environment and Climate Change Scrutiny Committee.  Before this change the Environment committee also dealt with Neighbourhood issues, so I suggested and then chaired a new subcommittee dedicated to the Climate Emergency. Both committees were chaired by my Labour ward colleague Lee-Ann Igbon. We jointly have a reputation for being unafraid to challenge people, however clever they appear to be or how much power they have, and this approach has resulted in a lot of thorough scrutiny combined with enormous respect for the council officers and organisations striving to find ways to accelerate the action we all need to take.

As my motion instructed, the council has reorganised itself to focus on climate, with the responsibility lying with the Deputy Chief Executive. We now have dedicated climate change officers who, following my interventions at scrutiny, have permanent contracts. I continue determined to change the world together with anyone who will work with me on an honest basis, but I will defend myself from political opportunism.

Annette Wright is a Labour Party councillor for Hulme ward in Manchester. She asked that payment for this piece be donated to Epping Park Warriors, a group of Hulme residents working together to make a lovely green, clean, biodiverse space in their area.

The Climate Emergency was declared on 10th July 2019.