Protecting those who protest – Manchester Green & Black Cross on police bills, legal mutual aid and how we can protect our rights 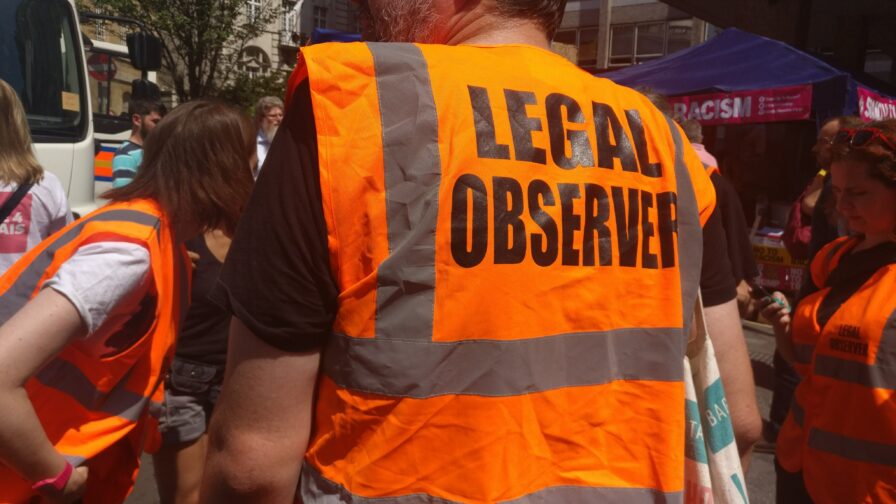 With the passing of the draconian Police, Courts, Sentencing & Crime Bill it’s now more important to know our rights, to hold the police to account for their actions.

Last week the Police, Crime, Sentencing and Courts (PCSC) Bill passed the final legislative hurdle and will soon become law. The Bill will have wide and detrimental ramifications for our right to protest. And for marginalised groups such as Roma and Gypsy communities, it restricts the right to live their traditional lives.

Manchester Green & Black Cross (GBC) is a local off-shoot of the national organisation founded in 2010 to provide legal support for protests against the Tory-Lib Dem coalition’s austerity agenda. GBC takes inspiration from the Anarchist Black Cross, an organisation that provided solidarity and legal support to people imprisoned for trade union organising, strikes and political agitation. Manchester GBC provide legal advice to people at protests, and monitor how developments in police equipment and tactics are increasingly infringing on and repressing our right to protest.

Simon Pook volunteers with Manchester GBC and works as a solicitor at Robert Lizar Solicitors. He volunteered as a legal observer before qualifying as a solicitor, and now develops legal training packages through GBC for community groups. We discussed his work with GBC, the authoritarian trend to policing in Manchester and the importance of educating communities on their rights in light of the new draconian legislation.

“The role of a legal observer is to look at the state apparatus, the roles of local authorities and the actions of police to discern if they are restricting a person’s right to protest and to express their views. And that has become an increasing issue in Manchester.”

“For instance, you need to apply for permission to have a demonstration or a parade. In recent years this has involved increasingly onerous requirements to get approval. You need a traffic management plan, you have to liaise with the police, and sometimes public transport too. What I say is ‘Look, if that is what the state are doing, putting those restrictive conditions in place, it may begin to infringe on people’s fundamental rights to have a protest, to march from Point A to B. Is it really necessary for those conditions on the demonstrations?”

GBC’s legal observers are especially focused on new tactical developments and equipment by the police to survey protests and control protestors.

Simon continued: “On the day, all of our efforts are focused on police. The different roles of the police; they have people in blue bibs that call themselves Police Liaison Officers. As we tell everyone in our training sessions, their role is to collect information on the protest, protestors and organisers. If the police want information, then they should rely on their own ample resources.”

“Most people are fully aware of the right to protest. But there’s very few people aware that they don’t have to talk to the police. By talking to the police, the police will use that innocent conversation for what they call intelligence. And they will then use that intelligence at a later point for any further demonstrations by particular groups.”

This intelligence gathering has been used to target specific individuals across multiple protests with the police employing investigation-style targeting of particular organisers and attendees, even though no criminal offences have been committed or suspected.

“Legal observers were able to identify four people at Kill The Bill protests who had been targeted by the police having gathered information from others” Simon revealed. “When walking around at one protest we found a white van, an unmarked police vehicle, and on the seat there was a document from GMP with people’s names on it. It appeared to be a briefing note, on which were named individuals. We have it on photograph. The police’s interest appears to be that these individuals are lawfully and peacefully exercising their right to protest to gather and express a lawful view. I don’t see any reason or justification why the police should be gathering intelligence on peaceful protests. I see no reason for that.”

The British state has radically expanded its statutory powers to conduct ‘covert’ surveillance of social movements with the Covert Human Intelligence Sources Act, which empowers agents from public bodies to engage in any criminal conduct, passed in 2021. Earlier this year a South Wales BLM group closed down after it revealed police attempted to recruit a member as an informant. Alongside targeting specific protestors and intelligence gathering, tactics have also extended to explicit shows of force.

Simon notes: “In Greater Manchester we have the Tactical Aid Unit, or Public Aid Unit. These are the police that look like some paramilitary outfit.”

The Tactical Aid Unit, a more heavily armoured branch, is trained for crowd control, and has been employed at riots and violence at sports events. The unit was also used at a Kill The Bill action last Summer where its ‘heavy handed’ arrests of 18 people left one ‘traumatised’.

Alongside the physicality of arrest and detention, GBC have noted how the growing scale of equipment and resources devoted to policing protests is often hidden.

“Often at a peaceful demonstration, a quarter of a mile away there’s six or seven police vans full of riot shields, with officers inside who are sweating profusely. It doesn’t even matter what the weather is. We record all this. The reason why we look at the role of those police, and what police have hidden in side streets, is because that helps build an overall picture of how states have responded to a particular protest.”

With the PCSC Bill set to come into force this summer, it will likely soon be used to place significant restrictions on the freedom of speech and assembly.

Encouragingly however, groups and organisations that have mobilised to oppose the bill are reorienting themselves to educating protestors and communities in how to subvert and oppose its employment. In a defiant statement NetPol, a Police monitoring network, made clear “This is not the end of the fight against this legislation. It’s the beginning of a new fight to challenge how it’s used on the streets and in our communities.

Making the bill unenforceable will require communities educating and equipping themselves with the legal defences to make their voices heard. Simon outlined how Manchester GBC are preparing to step up their work:

“We run Know Your Rights sessions, and groups often invite legal observers to do these sessions. I’d say to anybody, if that’s something you think you need please contact Manchester GBC and arrange that, because they are so valuable. If you can go to a demonstration armed with your rights you know how to politely respond to the police so your rights are not infringed, because the police will happily infringe our rights and happily remove legal observers from the area of a demonstration.”

However, these resources and services cost money and GBC relies on donations and dedicatedvolunteers to keep its work going.

“At demos its normal to give out five to six thousand legal advice bustcards. They cost quite a lot. From September ‘til now I believe roughly 10,000 bustcards have been distributed across protests around Greater Manchester and slightly further afield.

“To keep our training available to everyone we have to rent rooms across the city, to make sure people aren’t out of pocket doing this work. We’re also not just in the city, Manchester GBC covers everywhere from Birmingham upwards. We do training for people living in Bolton, Salford and further North in Preston and Lancaster. So we can get legal observers trained in different localities so they can go out and help progressive groups and their communities.“

Manchester GBC have an ongoing fundraiser through GoFundMe and have an easy donation option on their website here.

“All the funding and donations we get helps keep legal observers on the ground. If you’re an activist or person out protesting and you see us, come over. If you’ve got any concerns about the police or the protests, come over and talk to us. We’ve always got a bustcard you can take away with our details and info on too.“

You can find out more about Green & Black Cross here

You can donate direct to Manchester GBC here