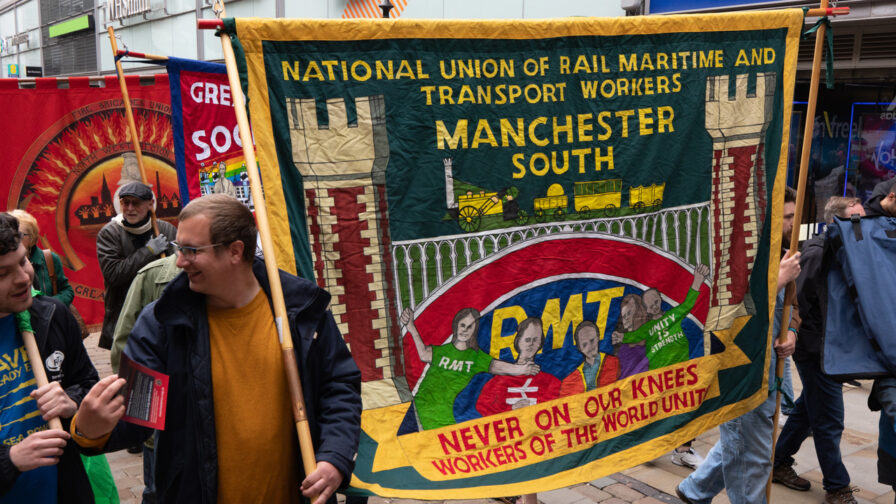 The colourful banners, held aloft by proud union members who marched from St Peters Square through the city to Sackville Gardens on Sunday, for the May Day Festival, reflected in their designs not only working class champions of the past but modern and on-going struggles for workers’ rights and equality in today’s society.

One such banner was held aloft by the RMT (Rail, Maritime and Transport Workers) union whose members are currently in an ongoing dispute with TransPennine Express (TPE) over pay.

A RMT union member who attended the march (who asked to remain anonymous for fear of disciplinary action by his employers) explained.

“Currently we don’t get any payment for scanning tickets even though we work alongside Northern where they get 2p per scan. We also used to get paid an enhancement for working Sundays which they [TPE] withdrew from us during the pandemic.”

The RMT plans further strike actions running into June if the dispute cannot be resolved. The picketing RMT member said:

“Overall the strike is very well supported and there are big picket lines at our depots: Manchester Piccadilly, Manchester Airport, York, Scarborough, Newcastle, Glasgow, Preston, Liverpool, Sheffield, Cleethorpes and Hull. There are nearly 400 conductors involved in the dispute. We voted 85% in favour of strike action with an 85% turnout.

“The union is currently in exploratory talks with the company but the action will remain active until we get an acceptable concrete deal.”

The May Day Festival in Manchester was part of the International Workers Day celebrations, observed in over 80 countries across the world, that take around the 1 May each year. It is a day used to celebrate the past victories of the working-class in the struggle to improve worker’s rights across the globe, and to highlight the ongoing struggle to obtain decent pay and conditions in all fields of work, and the need for strong and active trade unions for collective negotiations.

As John Morgan, President of the Manchester Trades Union Council (MTUC), puts it.

“There are many reasons why trade Unions are relevant in the modern work environment but two major reasons stand out. Firstly, workers coming together can influence health and safety policy at both a local and national level, this has been of particular importance during the Covid pandemic.”

Latest figures from the Health and Safety Executive (HSE) show that the workplace is still too dangerous for many employees. Across Great Britain in 2020/21 a total of 142 workers were killed at work, this figure was an increase of 29 from the previous year. Morgan went on to say:

“The second is wages. We have reached a point where wages have generally stagnated under this government whilst we have record levels of inflation. However, trade unions are fighting back. For example the Unite Union has just won a dispute with CHEP pallets which ended one of the longest disputes in the Unions history.”

The Trafford based CHEPS dispute ended on 27 April with an Inflation-beating 14% pay package increase agreed, while the Retail Price Index of inflation stood at 9% in March.

“Solidarity gives these workers strength that they don’t have as individuals and helps prevent exploitation,“ Morgan said.

Manchester has been at the forefront of union formation and recognition with the national TUC being formed in 1868 at the Mechanics Institute, on Princess Street, following a meeting between the Manchester and Salford Trades Councils.

“As a TU officer in the public sector, I know how important input from trade unions remains in Manchester, especially in, but not limited to, the public sector. This doesn’t seem to be quite the case in other areas of the country, with a less noticeable history of cooperation.”

The TUC has supported the current RMT dispute with publicity involving union branches on social media, organisation of rallies on their behalf, attending their picket lines and generally trying to emphasise to them that they are not fighting alone.

With the controversial policing bill, which criminalises elements of protest and marches, soon to become part of UK law after it was voted in by MPs in the commons, Morgan has concern for future marches and demonstrations that may face a restricted or uncertain future.

“This is a real worry! The decision, to ban or not, will be made by individual police officers. This opens up the possibility of a very easy access to a mechanism for a political opponent to shut down a demonstration that they disagree with. This is totally unhealthy in a democracy. There is no evidence whatsoever that such draconian legislation is needed. It could actually cause the reverse of what it is claiming to achieve, by forcing ordinary people to break the law to defend their rights of free speech and assembly.”

When Sundays march finally made its way to Sackville gardens via Canal street the supporters had reached several hundred in number and a relaxed atmosphere ensued. Speakers included the Poet Cookie Love and Manchester council’s leader Bev Craig.

Cookie had composed a poem dedicated to the MTUC which was well received, while Bev Craig confided to the crowd that on first arriving in Manchester she had little knowledge of the trade union movement. However, she confirmed she was now a “committed trade unionist” and urged everyone to get involved in the democratic process.

The attendees included members of the Manchester Young Communist league, Trans equality supporters and members of the UK Branch of the KKE (Communist party of Greece) as well as the major trade union regional branches.

The festival emphasised the important role trade unions have in today’s world, striving not only to promote workers collective representation, but also performing a wider role in fighting for social equality and the improvement of people’s lives beyond the workplace.

To those that dismiss the trade union movement as “dinosaurs of the past” and not relevant in the modern world one is put in mind of the words from Martin Niemöller’s poem, First They Came.

With their considerable activity promoting workers’ rights and social justice trade unionists are likely to be highly represented amongst the first round of people criminalised by the Police, Crime, Sentencing and Courts Bill.

Feature image and all in article photos by Gary Roberts