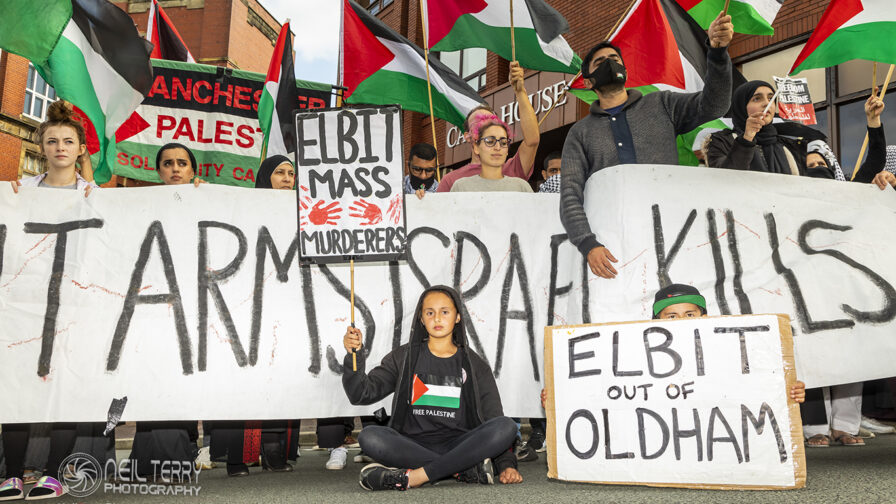 Elbit is the largest supplier to the Israeli military of unmanned aerial drones, which are used in lethal force attacks in Gaza leading to the deaths of Palestinian civilians.

The Israeli owned Elbit Systems arms factory in Oldham announced it was leaving town in January, following a long-fought campaign by pro-Palestinian campaigners from across Greater Manchester to oust Elbit from the Cairo House factory in Waterhead, Oldham.

Jaqui GreenField, of Oldham Peace and Justice, and Adie Mormech, of Manchester Palestine Action, two organisers of the protests against Elbit in Oldham return to the factory to discuss their successful campaign and why they dedicated themselves to this campaign over the five years it spanned.

Mormech, who has previously lived and worked as a teacher in Gaza spoke of how he got involved in direct action protests against Elbit, originally against another Elbit factory in Shenstone, Staffordshire.

“We were on the roof for three days, we closed it for three days. And this was during the bombing of Gaza in 2014, where they killed over 2,200 people including over 500 children in 51 days. Including two of my students, one of which was killed while I was on that roof doing that protest.”

Corporate Watch reports that Elbit produces 85% of all drones (Unmanned Aerial Vehicles, UAV) used by the Israeli military. Elbit’s Hermes 450 and 900 drones can be equipped with targeting systems to mark a target for other weapons systems to attack, and they also can carry two air to ground missiles, to carry out attacks directly.

A leaked confidential Israeli military police report showed how the Israeli military operators of a Hermes 450 drone were responsible for killing four Palestinian children, cousins aged 10-11, playing on a beach during Operation Protective Edge. They killed one child with the first missile fired, and then fired a second missile to kill the remaining three.

The activists may well turn their attention next to the Elbit factory at Shenstone, which is still active alongside others across the UK.