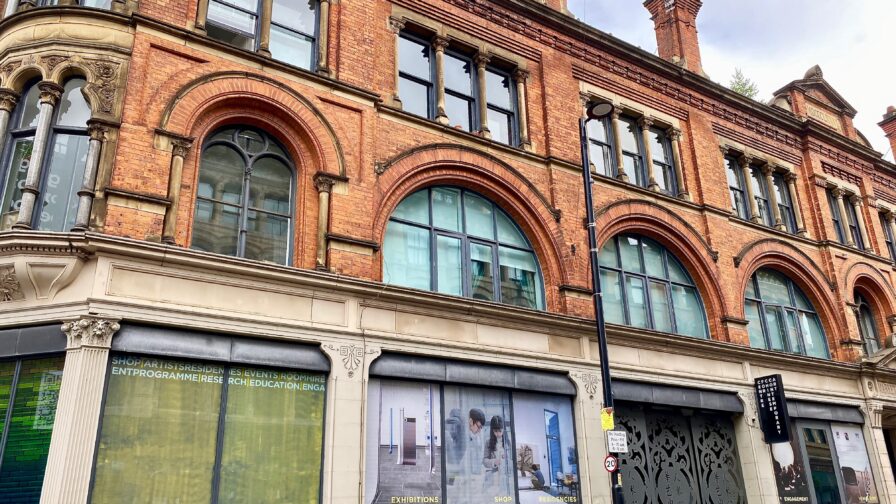 "It is time for the White occupancy of the Centre For Chinese Contemporary Art to end, and for agency to be placed back in the hands of East and Southeast Asian artists, curators and trustees," the artists said in a damning report.

“It’s not any specific event of racism which we’re trying to tackle — although of course we have experience of that,” Yuen Fong Ling, an artist of Chinese heritage tells me. “It’s about tackling a culture that makes people think in a certain way and allow it to happen.”

Ling is one of many British artists of Chinese heritage calling for Arts Council England to defund the Manchester-based Centre For Chinese Contemporary Art (CFCCA). They claim the Centre is a “White occupied institution” bent on “framing and commodifying ‘Chinese’ art and artists.”

The Artists Working Group (AWG) is a group of seven artists of Chinese heritage recruited in September last year to address issues of equality, inclusion, and relevance within the CFCCA. The CFCCA hired the AWG to engage in structural change within their organisation in what it called a ‘Revisioning Project’, in response to an open letter from the artist J.J. Chan pointing out the “Eurocentric” leadership of the Centre.

Rather than addressing racial inequalities, however, the AFG exposed a power differential — and the CFCCA dug its heels in. In the time it worked with the CFCCA between September 2020 and March 2021, the AWG says there was only one non-white staff member out of 13, and only three Chinese-heritage Board members.

The group says the “occupancy” has led to a triangle of confrontation between ESEA (East and Southeast Asian) artists, the CFCCA and Arts Council England.

The AWG has called for specific actions, requesting the CFCCA take responsibility for perpetuating alleged structural and institutional racism. They have also stipulated that the Arts Council investigate the flaws of the CFCCA as well as acknowledge their own role in enabling these failings. The Arts Council committed to funding the CFCCA a total of £1,149,924 for the four-year period covering 2018-2022.

Members of AWG say action is needed to end what they call a “White Occupancy of a Chinese Art Centre”.

The CFCCA was established in 1986 in Manchester’s China Town. Back then it was known as the Chinese Arts Centre, and it was an artist-led charity devoted to platforming British Chinese artists and to engage the local Chinese community.

But over several decades a move to the Northern Quarter, along with a name change and a rebrand, led to the organisation allegedly being predominantly white.

Ling remembers how in the early days the Chinese Art Centre had been crucial to his development as he grew up in Manchester. Now, he no longer trusts the organisation.

“Over time it became less and less in touch with its kind of core stakeholders,” he recalls. The Centre’s rebranding “meant it lost community focus and sought instead to establish the identity of British Chinese.”

The AWG says its own creation was a promising development, an “opportunity to take an active role in decolonising a white-occupied institution who were framing and commodifying ‘Chinese’ art and artists”.

But the group soon grasped the Centre lacked the transparency it had promised them when it started. The group alleges the CFCCA had appointed what they call a “white-led external consultancy company, with “no base level terms of anti-racist and decolonial references,” to “manage and deliver the revisioning project.”

“We had growing concerns that as a ‘Chinese’ Artist Working Group our appointment was a performative gesture,” the AWG says in a damning report, “an Asian veneer to a White organisation’s revisioning.”

Further meetings with the CFCCA led the AWG to realise that organisational issues included an absence of a shared mission, a lack of leadership, and an alleged acceptance of racist attitudes. This was combined with, what artist group member Eelyn Lee, another artist at the AWG, calls “a myth of meritocracy”.

The idea is that if you work hard you will endeavour, but it doesn’t account for the hidden challenges to anyone of colour in that process,” Lee explains.

“We refer to it as the ‘bamboo ceiling’. People in senior management said that they cannot just get the [qualified Asian] staff.”

For reasons which are unclear to the AWG, the CFCCA terminated its relationship with the group on 31 March. This lead the group to call for five actions, including the Centre’s Senior Management and Senior Curatorial staff “taking responsibility for perpetuating structural racism.”

With the group also felt that the Arts Council must be held accountable as one of the Centre’s lenders, and they are asking people to support their petition.

The CFCCA is the only publicly funded Chinese Arts Centre in England, according to Lee. She feels that “four of our calls to action are actually aimed at Arts Council England’s to basically stop funding.” She feels that it is not just happening at the CFCCA, but a “sector wide issue,” with artists facing discrimination or bullying unable to go to the Arts Council for help.

“It is time for the White occupancy of CFCCA to end, and for agency to be placed back in the hands of East and Southeast Asian artists, curators and trustees,” the artists demand.

Back in the 1980’s Ling took part in a traineeship scheme run by Arts Council England. It aimed to address the lack of people of colour in leadership roles.

“Back then there was a very clear message around why this scheme existed,” Ling says. “And yet where was the learning? Why did they continue to insist there be a white director in the role to lead the Chinese Art Centre? It’s interesting, isn’t it?”

“[The] CFCCA could have sent a very clear message. It failed to do so because there isn’t the lived experience within the organisation to speak to it authentically.”

“There are a lot of conversations going on right now around what is Chineseness and raising awareness really around our identity,” Ling observes. “When you think about racism, you often don’t think about East and Southeast Asians, and it seems like it’s OK to take an Orientalist perspective because, you know, ‘we don’t mind.’ We are like the ‘model minority,'” he says, thanks to a perception that they are “hardworking” and “keep quiet.”

“It is doubly disheartening for us as East Asian artists who already face institutional exclusion in the mainstream arts sector, to know that the only art space dedicated to contemporary ‘Chinese’ visual art in the UK supports a bamboo ceiling and is nonplussed about their orientalist framing of our work through a White curatorial and organisational gaze.”

On 11 June, the CFCCA was asked to submit a report to the Arts Council to respond to the Artist Working Group’s devastating criticisms.

The Meteor asked the CFCCA to comment on the report. It responded by publishing a press release on its website.

“We are listening intently to the criticisms around representation across the organisation and are fully committed to ensuring we work towards being an actively anti-racist and pro-equality organisation. We are reviewing and improving CFCCA’s recruitment procedures and are investigating alternative models of leadership, to address representation within the team at a senior level.”

A spokesperson from the Arts Council also told The Meteor it took “allegations and accounts of racism very seriously.”

“We recognise how difficult it is for anyone to speak out and share such experiences,” it said. “Although we are not responsible for the governance, management, and operations of the organisations we fund, we do have policies and agreements in place to monitor our funded organisations and to hold them to account.

“We are currently in active conversation with the board of the Centre for Chinese Contemporary Art and are awaiting receipt from them of the final report by Diverse Matters. Once it is available, we will then require CFCCA to tell us how the organisation will respond to recommendations within the report, including any actions it will take in response to the serious issues that have been raised.”

The AWG is waiting for a response from for the Arts Council to the CFCCA report.

When asked what the AWG would like to see, Lee commented that the group wants “the Arts Council to stop funding CFCCA and to divert that funding to support East and Southeast Asian artists working in this country.”

According to the Artist Group the current building in the Northern Quarter is to be handed over to CFCCA in a few years and they would like to see it run by an artist led organisation. They want to have a town hall event in September and several round table events to widen the conversation, and they hope that by the end they will have some concrete suggestions of what a positive centre for Eastern Southeast Asian artists would look like.

Lee added that these ideas and suggestions will be transferable to the whole art sector because now a lot of organisations allegedly uphold institutional racism and bullying.

“It’s not about calling out the director of the CFCCA or any specific board members,” he points out. “It’s about the systems that allow all that stuff to happen.”