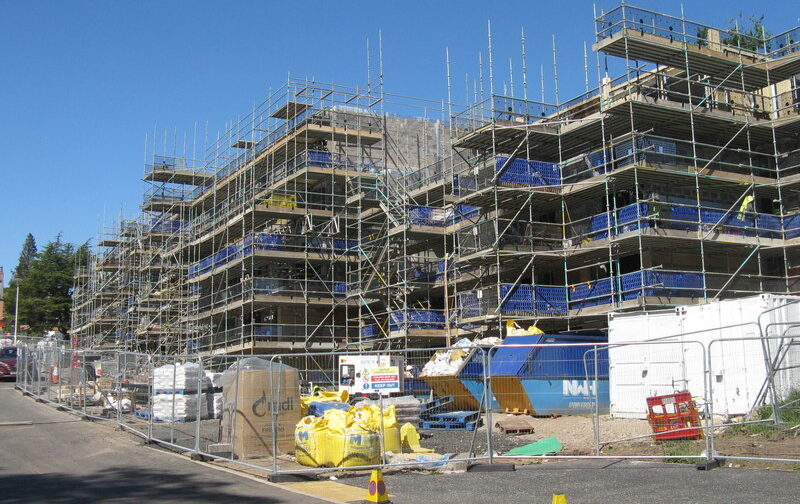 Open letter calls on Andy Burnham, and the leaders of the conurbation’s ten boroughs, to "intervene" in the government’s plans to change the UK planning system, which the campaigners call an “emergency for communities and local authorities across England."

Campaigners have written to Greater Manchester mayor, Andy Burnham, and the leaders of the city region’s ten local authorities calling on them to “intervene” in the UK government’s proposed overhaul of the English planning system. The open letter says the planning proposals are tantamount to telling developers to “get on with it – do what you like.”

The open letter coordinated by the Manchester Local Plan Coalition, and signed by a diverse range of campaigning organisations, expresses concern about the loss of local democratic control which they say the government’s controversial new planning laws will cause.

“As a coalition of community groups and membership organisations concerned about democracy, the environment and the public realm, we have been alarmed by recent Government announcements on the English Planning System,” the signatories state in the letter. “We believe the proposed measures amount to an emergency for communities and local authorities across England.”

The campaigners told The Meteor they would like to see mayor Burnham make a joint statement with other English metro mayors to highlight the unacceptability of both the measures and the way they are being ratified without parliamentary oversight.

Last year, the government published its controversial Planning for the Future White Paper which puts forward a vision to radically overhaul England’s planning system and replace it with zonal planning and centralised decisions. The government argues this will boost the construction of high-quality sustainable homes and “revive” high streets by streamlining the approval process and cutting red tape.

These proposed changes included extending permitted development rights (PDR), the type of work developers can perform without the need for planning permission from local authorities. This would allow a range of commercial building types to be converted into housing; and buildings such as blocks of flats, offices and homes to be extended upwards by two stories to create new homes.

The Government also made changes to building use classes by creating an umbrella commercial, business and service use “Class E”, covering shops, restaurants, offices, gyms, banks, GP practices, nurseries, light industry and other business and leisure premises. Originally, PDR schemes were only applicable to office buildings, but in December secretary of state for Housing, Communities and Local Government Robert Jenrick unveiled plans to extend PDR to all Class E buildings.

In the letter, the signatories argue that local authorities will lose all meaningful control over placemaking under the Class E PDR regime. Developers will possess a “right to convert practically any building of any size to residential without planning permission”, they say, with homes instead consented through a “prior approval” process where councils would be unable to refuse development. Local government shares these concerns, a recent survey showing 78% of local councillors in England saying the proposals are undemocratic.

Joe Ravetz, co-director of the Collaboratory for Urban Resilience & Energy at the Manchester Urban Institute of the University of Manchester, who signed the letter, said the current proposals for an expanded PDR would bring a “developer free-for-all”, which will further “undermine any local democratic input” and that replacing “marginal shops with distant landlords will jeopardise the livelihood of struggling high streets, not to mention any remaining sense of local place and identity.”

The signatories also cite the government’s own quality standard review, published in July, which showed many problems with PDR housing such as “shoddy conversions, siting of homes away from transport links and services, and the loss of tens of thousands of affordable homes due to Section 106 exemptions.

The Manchester branch of Friends of the Earth signed the open letter and a spokesperson said:

“The Government’s proposals to strip back planning protections are terrible news for local communities and the environment. By giving developers free rein, we’ll lose our say on what gets built in our neighbourhoods, and councils will be prevented from setting standards for quality, affordability and energy efficiency.”

In the letter, the campaigners also expressed concern about the process being followed to evaluate the proposed changes. The government is currently consulting on the Planning for the Future White Paper via an online survey which is open until 28th January, after which it will publish a response. However, there is no guarantee that feedback from the public will affect its plans.

“We hope you agree with us that the very premise of this consultation is wrong, given the risk to housing standards, local democracy, place-making and climate strategy,” the letter states. “The towns and cities of Greater Manchester need the right housing, in the right places – affordable and served by the necessary community infrastructure and employment opportunities.”

The government will pass the changes using Statutory Instruments, which means that it will not require parliament to make the changes law. “It is the introduction via Statutory Instruments of separate fast-track changes which has prompted us to write to you urgently to request that you intervene on behalf of Greater Manchester’s local authorities and constituencies”, the letter continues. “We therefore request that Greater Manchester’s leaders and public bodies use your combined weight and media access to make known your views not just through the online consultation but loudly and publicly, to galvanise other regions to do the same.”

Echoing the concerns of the campaigners, Salford Mayor and the GMCA Lead for Housing, Homelessness and Infrastructure Paul Dennett said:

“The [government’s] proposals would comprise a fundamental change to the way development is planned in England. Change of this scale should be managed through a comprehensive and collaborative process, involving local authorities, the development industries, environmental groups and local communities.

“We would welcome a genuine debate on how the planning system can be improved, but this is only possible if the current consultation is the first step in a process. There is no indication of the intended process following this current consultation, however the tone of the White Paper implies that the government sees this consultation as the end of the process.

“Given the lack of detail around many of the proposals GMCA would be very concerned if this was the case, and at any move to rush through changes.”

A spokesperson for the Ministry of Housing, Communities and Local Government said in a comment to The Meteor: “We disagree with these criticisms which fail to understand the purpose of these measures.

“The proposed permitted development right will support the diversification of our high streets and town centres by allowing more flexibility for much-needed housing, while making the most of existing buildings.”

This article was edited on 9 January 2021 to include the comment from the Ministry of Housing, Communities and Local Government.