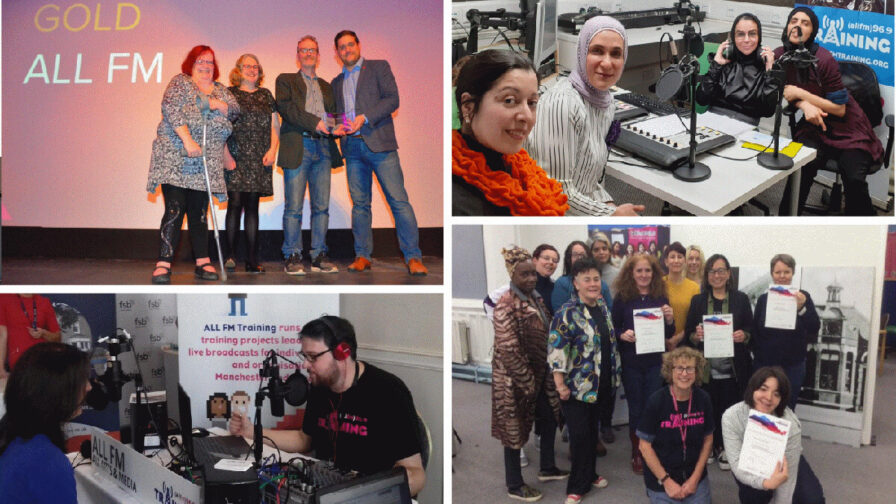 ALL FM are an award-winning community radio station that normally broadcasts live from their Levenshulme studio.

But when the pandemic hit they had two options: transition their 100+ volunteers to working from home, or close down. Conrad Bower finds out how ALL FM has kept the show going.

Having committed to carrying on, the team had to completely rejig the way they worked. The radio stations 100+ volunteers had to transition from their live radio shows in the ALL FM studio to pre-recording them from home. The team also adapted their radio training sessions to be facilitated online via Zoom.

Ed was impressed by how adaptable and pragmatic the presenters have been. “People used whatever tools they had to pre-record their own shows,” he explains, “Whether it be a laptop, a PC, a mobile phone, or a handheld recorder, people found a variety of ways to pre-record their show.” The takeaway from the experience has been: “We can find a way to make things work.”

With the support of ALL FM’s volunteer coordinator Jason Cooke the radio hosts, who primarily work as volunteers, have been able to continue broadcasting over 70% of their shows. It’s an impressive accomplishment from one of the UK’s longest running community stations in the UK. First airing as Radio Longsight in 2000, the radio station received it permanent broadcasting license in 2005 and has been running out of Levenshulme Old Library since 2018, where they have worked hard and raised funds to build two fully equipped broadcasting and training studios.

Last year, ALL FM won the Community Radio Station of the Year award and started 2020 with big plans to promote their radio training with the help of a hired sales and marketing professional. Then Covid-19 struck and like every other organisation they had to re-evaluate and re-prioritise their plans to the new pandemic and lockdown reality.

“The real voice of Manchester”

Suzi Hoffman is a freelance radio producer and a key member of the ALL FM team, hosting her own show on Friday morning called The Hype and regularly providing radio training for the station. Suzi got involved with community radio after a low point in her life when she lost her job in 2009. Radio training, at another station called Salford City Radio, was her springboard to a new career. She says the training, “raised my confidence and brought out all my skills,” including community development skills she had learned as a youth worker.

Since the pandemic Suzi says, “We’ve had to learn new skills like training via Zoom and having volunteer meetings via Zoom and things like that that try to keep people together. But… because not everybody is au-fait with Zoom and not everybody has access to the internet, even a laptop or a mobile phone that’s attached to the internet, so it excludes people and we’ve found it hard to keep people included, but I think we’ve managed it quite well, to be honest.”

Despite the drawbacks of online training for some, Suzi says that others, such as “people with mobility issues, disabled people and people who are shielding,” had benefited from the remote access online training allows.

For Suzi, reaching and involving as many people as possible across Manchester is what ALL FM is all about. She describes the radio station as, “the real voice of Manchester.” She says “that means it’s the real voices, many, many voices of Manchester. We have an ethos that is of equality of voice and everyone should have a voice in their local community. What we do is raise confidence through radio, and many people go on to be more confident and to participate more in other areas of their own community.” She adds, “We’ve had people who came along and now they’re working for national radio.”

ALL FM’s working model is “pretty simple,” says Ed. The station provides radio training to diverse communities across Manchester, culminating in a live show. The trainees are then offered the opportunity to host their own radio shows.

This process results in a wide-ranging programme, aimed at people with autism, older people, those with mental health issues, disabled people and BAME communities of various stripes. The broad range of themes covered by ALL FM shows is complemented by an impressive array of radio shows broadcast in seven different languages including: Chinese, Spanish, Urdu, Farzi, Punjabi, Portuguese and Polish.

The radio hosts have free reign over what they broadcast as long as it’s within OFCOM broadcasting standards. “It’s a trust thing,” Ed explains, “We don’t tell shows what to broadcast, it’s a blank canvas, its up to them what their content is.” For Ed this is what “for the community, by the community” is all about. “We are not telling people what to say, we are giving them the tools and training them and giving them the voice. The way we look at it is we are giving a voice to those whose voices are least heard.”

Building confidence and community through radio

When I speak with Suzi, she and her colleague Shabnam Hussein are about to give a radio training session to 12 unemployed women who are part of the Multicultural Womens’ Group. The women originally come from a diverse range of countries – South Korea, Cote D’Ivoire, El Salvador, Argentina, Ecuador and Iraq.

ALL FM has a general policy of encouraging people to speak in their first language when producing shows. However, for this third training session the women will be producing a live radio show in English because they want to improve their fluency. Suzi says she believes the training has “built their confidence because we’ve managed to encourage them to make little bits of radio: some of them have talked about making their own clothes and different topics that they’ve managed to talk about in English.”

Prior to this women’s group, Suzi had been working with the Answer Cancer Group (ACG), which includes people who have survived cancer, alongside a GP and a pharmacist. Their broadcasts provided a support group for people living in some way with cancer. Suzi’s face lights up as she recalls two women speaking a Nigerian version of pidgin English in the ACG show:

“You can pick out chunks of what they’re saying: something, something cancer, something All FM, but they speak with such emotion, it’s absolutely incredible. I’ve learned loads from that group.”

Another ALL FM project Suzi was involved with before the pandemic hit was in care homes. She and a small team were going into care homes and asking people who work and live there to collect stories from each other.  “We want to have proper drop-ins for older people, but we’ve had to put that off,” Suzi explains. She hopes to resume the project and return in person when it’s safe to do so. It is likely to become a crucial service in recording the experiences of those that survived the pandemic and what they experienced during lockdown.

Throughout the pandemic, and its various forms of lockdowns and restrictions, the diverse range of ALL FM radio shows, which included a daily lockdown show hosted by Shaun Connors, has provided a significant line of communication to communities. It’s provided important information about the pandemic to a variety of disadvantaged communities who may not have access to online means of communication.

Ed says this was made possible by the commitment of the volunteer radio hosts, “The presenters are dedicated people who wanted to carry on serving a function, playing a role, being of value. So they were keen to get their shows out on a regular basis, promote messages, helping inform, entertain and be of value … I think they went the extra mile to be of service and value at this time.”

Although ALL FM don’t use the terminology of “co-production” it neatly encapsulates the way in which they work. While co-production is still a developing and flexible concept, it generally means involving people in the conception, design, steering and management of services, while helping them build on their existing capabilities. This bottom-up approach enables organisations to become agents for positive change rather than solely providing services.

Rather than working towards a template of co-production ALL FMs work has naturally evolved to embrace the concepts of co-production because they believe it is the right way to run a community radio station.

But what is the future for ALL FM? Like many other voluntary sector organisations, the pandemic has created financial worries about the future. Ed, who is heavily involved in fundraising for the station says. “We worry about income and solvency of the business in the long term due to Covid, but many businesses have been affected. We are doing our best to tackle it, but as for now we have adapted quite well. It has been challenging, but it has been challenging for everyone.”

Now with Covid-19 vaccines on the horizon, Ed has his thoughts on how ALL FM will emerge from the pandemic. “We don’t exactly know what a post-Covid world looks like, but I would like to think ALL FM will adapt to it, adapt its output and adapt its engagement methods and be able to serve the community in a useful manner.”

Having lived and worked collectively through the pandemic, Suzi believes ALL FM will emerge as a more rounded organisation that is “more solidly supportive of people.” She continues, “I think with all the things and new skills we’ve learned, we can now use those in the future to engage people perhaps who we never even thought we could engage – people in psychiatric hospitals, people who are in prison. We can make many more links now that we’ve developed these new skills, and I think that’s all for the good. I think it will enrich what we do in radio.”

With their motto of “for the community, by the community” and their rich mix of topics and culturally diverse hosts broadcasting to the “People’s Republic of Manchester” ALL FM have enriched and empowered communities across Manchester that have taken part in and listened to their shows.

Like other voluntary organisations we have covered using co-production methods such as Covid mutual aid groups and the GM Savers network, they provide a cohesive force to communities and society as a whole, which opposes the power driving the atomisation of society that is prevalent in modern political, economic and cultural forces, a drive that has been exacerbated by our pandemic lockdown trials.

The people that make ALL FM will continue to provide that force binding communities together whatever the post-Covid world brings.

ALL FM can be tuned into at 96.9 Mhz, for ALL FM’s programme schedule – click here

Radio training at ALL FM is free for people claiming benefits. For more information email: ed@allfm.org

Feature image and all in article images: ALL FM