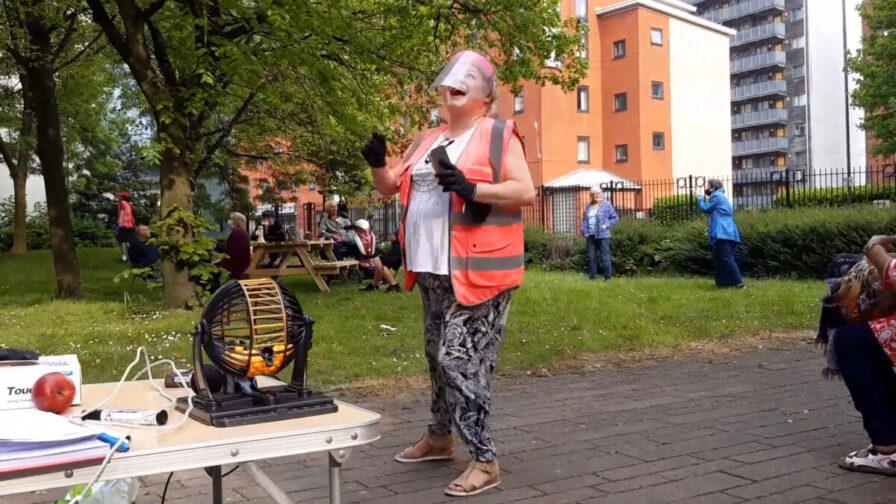 Community-led groups making up the GM Savers Network describe how they and their members are working together to get through the Covid-19 crisis.

Six months on, the global pandemic is putting pressure on communities across Greater Manchester. While the UK government continues to assure that “we’re all in this together”, the reality is that the crisis has hit poorest areas hardest. For some, the response has been to band closer together to bridge the gap left by inadequate local services. In Manchester, the GM Savers Network have done just that. From food prep and delivery, to looking after physical and mental wellbeing, these collaborating community groups have proved a lifeline to many.

Mums’ Mart, Brinnington Savers, On Top of the World Hulme and Miles Platting Savers are the female-led groups which make up the GM Savers Network. Set up by an action research project funded by Mistra Urban Futures Realising Just Cities programme, and supported by CLASS (Community-Led Action and Savings Support), the network seeks to establish and encourage a savings culture in their communities.

This innovative scheme is a very different model to a traditional credit union (which offer small loans to those unable to access money from banks.) It is based on the ideas and practices of Shack/Slum Dwellers International (SDI), started across the Global South it has become one of the biggest grassroots movements in the world. The focus is not merely on financial inclusion but also on communities organising to co-finance and attract investment into local services and community infrastructure.

The methods used by the GM Savers network have strong parallels to the practice of co-production. There is no single formula to describe the co-production method but it empowers the people and communities concerned to become more than just service users of a service developed and planned solely by professionals. What are generally regarded as key features of co-production allows those involved to:

Every group in the GM network has a committee and a constitution. Through participating, members of the groups learn transparent financial management and organisational development.

Each person records their savings in their saving book. In the weekly meetings they chat about what they’re saving for. Some groups have gone on to find ways to generate income for a community fund which savings group members can then vote for how they spend it. In their quarterly networking meetings, the groups share their learning and give each other ideas for ways to support their communities and address difficulties people are facing.

Mums’ Mart are also co-financing 10% of the costs of renovating a derelict caretaker’s flat based within the church where they have their meetings and table top sales. They are working with the Bramhall and Wythenshawe Methodist Circuit to raise the rest of the money. They have worked with an architect to co-design the renovation into a women’s wellbeing and advice space, something that was missing from their area. The aim is that this flat will be used as meeting rooms, for debt advice, for parenting classes, and responding to whatever other needs the community has.

The GM Savers Network consists of female led groups as women are often the beating heart of these communities holding everything together, although at the same time, they are least likely to have a voice in the decisions that affect their community. Following the SDI model of savers networks upturns this dynamic by centring the very people who work the most at a community level. Sharon Davis, Mums’ Mart’s treasurer, traveled from Wythenshawe to Nairobi to meet SDI savers and to see how they run things. She says, there women “rule the roost and they use savings to get it done. They rally the community.”

In the communities Sharon visited, savers would have their individual savings but they’d also save collectively. They would then go to the government and tell them how much money they had and how they intended to spend it for the community buying a new community space, or a toilet block.  They would then ask the government to match their contribution to make the development possible. This is an excellent example of community led co-production where citizens are creating and delivering public services by encouraging public and professional involvement alongside essential resource allocation.

Sharon says that the communities in Nairobi saving significant sums of money, gave them power. She is passionate about her own community’s need to engage with local officials and persuade them to invest in their local area. She explains “at the end of the film Antz, they realise there are only ten grasshoppers but they’re two million ants. We’re the two million and we can put pressure on.”

The pandemic put a temporary stop to the weekly savers’ meetings for the network but the support at the community level continued. Mums’ Mart had access to emergency community funding and used it to distribute food, making sure families had enough. Sharon and her daughter were looking out for ten families a day at the height of the crisis.

Similarly, in Miles Platting Ellie Trimble, the rector for the Church of the Apostles and St Cuthbert’s, has been coordinating food provision across the community. Their savers’ meetings at the church started in February and was held at a coffee morning that has been running for 23 years. The new addition of the savings theme fitted well with the other issues covered at the coffee morning, including food waste and food poverty. The group supplies fresh fruit, vegetables and bread they’ve got from FareShare Greater Manchester. Miles Platting is in a “food desert”, Ellie says, without a car, the nearest supermarket is half an hour away. There are corner shops but they are expensive and impractical for a weekly grocery run so the community group steps in to help out.

In the first few weeks of the pandemic over 100 families in Miles Platting were being supplied with food parcels by Ellie and members of Miles Platting Savers. Need grew beyond what the local group could provide so Manchester City Council provided some funding and set up a helpline so referrals could be made to the local areas, another example of community-led co-production at work.

However, the funding and the helpline closed at the end of August when people were told they no longer needed to shield. This put the pressure back on the local volunteers to fill the gap. But, as Ellie points out, “grassroots, smaller groups can respond really quickly” to need, and indeed in this case, they have to.

Hulme’s On Top of the World group also worked hard to support their community throughout lockdown combatting loneliness and the isolation of vulnerable people with daily ring rounds. They ensured practical needs were met by preparing food parcels, getting phone credit and collecting medication. But Tina Cribbin, Treasurer of On Top Of The World’s savings group, stresses that “people are more than just needs”. The group also prepared “boredom packs” which included colouring books, jigsaws, a crossword, a book to read.

Livelier activities were also very popular as Tina pointed out, “People need joy”. So balcony bingo and “Get Busy On Your Balcony”, where they enjoyed some socially distanced singing and dancing, really helped to bring people up. “The harder it got, the more we tried to break the awfulness” says Tina. Creativity is her passion. She leads a creative writing group which has published three books, including one written during the pandemic called ‘A Great Big Dollop of Hope’. It features poetry written by families in Hulme about their experiences during the crisis. And now, she’s planning a play detailing their lockdown experiences.

The point of the books, Tina says, is for the group to “do something themselves” that’s about them and for them. She is sceptical of professionals and academics that occasionally interact with communities, and who:

“Want to know about the negatives and how hard it is. They’re hooked on need and struggle. But A Great Big Dollop of Hope shows strength and power and joy.”

Tina says she is fed up with academics “taking (her) knowledge. They ask what the problems are. And what the solutions are. And then they turn it into academic language”. Two years later these same academics return to the community offering solutions that they think they’ve come up with themselves.

Tina doesn’t have much patience with this. Through her creative work she makes sure her community’s voices are heard. And through the savings group, the individuals can begin to feel more in charge of their financial futures. Tina is proud of her community and the mutual support and strength they offer each other.

One clear lesson can be taken from all the GM Savers groups: this community support with its utilisation of co-production techniques is powerful in building resilience, and it’s of critical importance in this time of crisis.

To access other articles in the Co-production During Covid-19 series – click here
Feature images and in article images: GM Savers network