Conditions that led to the Covid-19 crisis in social care 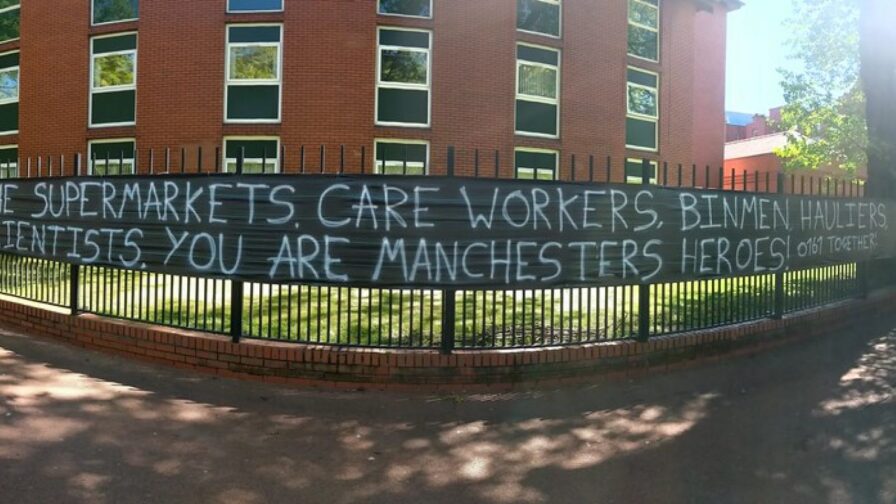 Salford Council have guaranteed full pay for care workers isolating because of Covid-19 under ‘The Salford Offer’. Now the council and UNISON are pressing private care homes to take up the policy, with the mayor and a local MP leading protests.

Imogen Woods explains how low pay, insecure contracts and institutional neglect caused a crisis in social care, and what we should do to prevent another.

The current crisis in social care has led to hundreds of unnecessary deaths in care homes. This is not just a crisis produced by a pandemic, but a symptom of a crisis that has been accumulating under capitalism as an overall crisis of social reproductive labour. Social reproduction is based on the idea that in order for capitalism to function workers need to reproduce themselves, by cooking, cleaning, caring for the elderly, raising children. It’s the work done to ensure society keeps producing itself and in turn ensures workers turn up to their shift the next day. Historically the majority of this work has been performed by women and is unwaged. Looking at the way the pandemic has affected the care sector and the historical context of commodification of care it’s a key strategic sector to organise for socialists and feminists alike.

As a union organiser in social care, I’ve spoken to hundreds of workers about the issues they face within the sector and phonebanked hundreds of carers in different settings to speak to them about their experience during Covid-19. Throughout the pandemic residential homes have become hotbeds for the virus, with the virus spreading through the homes rapidly. Reports on the front line include care managers purposefully putting PPE under lock and key, carers coming into work sick due to not being able to afford time off and residential homes being swamped with the virus leading to unnecessary deaths. They have a high turnover workforce on low pay with poor training. A survey by UNISON showed that 8 in 10 workers in the care sector do not receive full pay for sickness or self-isolation. So many faced the decision between risking their residents health or paying for basic necessities.

The UK government recently announced a ring-fenced infection control fund of £600 million to be distributed to councils for social care. This was won after a sustained campaign from trade unions and community organisations ensuring workers can get full pay if taking time off due to Covid related illness. Despite this still only 40% of care workers have access to full sick pay due to the nature of the sector- unaccountable, privatised, and increasingly fragmented.

The crisis in the care sector during the pandemic is two-fold. It’s the crisis in social care as a sector as a whole that has been repeatedly failed by successive governments as the sector has become increasingly commodified.  It’s a crisis in that profiteering care homes are faced with a pandemic they are not equipped for, with large buildings of multiple residents and workers giving personal care within close proximity of service users. Their motives are of course not the quality of care delivered but how profitable their endeavours are. During the first few weeks of the Covid-19 crisis, workers lacked proper personal protective equipment leading to hundreds of unnecessary deaths. The industry is largely unregulated other than an ineffective public body called CQC providing oversight and contracts with councils that stipulate little more than very basic requirements and are infrequently held accountable.

Placing this in context, this is symptomatic of the devaluation of working-class women’s labour as low skilled and not worthy of quality working terms and conditions. Furthermore, it’s also symptomatic of an ongoing crisis of social reproduction as more women enter the labour force meaning care is no longer delivered in the home but in factory-like residential homes or with workers delivering 15-minute visits to elderly and sick people in their homes.

The Covid crisis is not just a crisis of health but an amplification of an overall crisis in care and social reproduction that has been ready to burst for years. The labour is outsourced not just from our local authority to capitalist vulture firms but also from the homes of residents’ loved ones as women who traditionally undertook this work are forced to work longer hours, ‘lean in’ then call it ‘having it all’.  Care work is no longer the labour of love but the labour of workers under council contracts that commission the cheapest provider, call it a ‘social enterprise’ and wash their hands when workers are forced into exploitative conditions that have proved throughout the pandemic disastrous with whole care homes becoming swamped with infection.

Social care privatisation started largely in the 80s. In 1979 64% of nursing home beds were run by the NHS or local authority. In 2012 it was just 6%. Domiciliary care is a similar picture with 94% in public ownership reduced to just 11% as of 2012. As each contract is put out to tender, working conditions within social care deteriorate as staff on local government terms and conditions retire or leave and they are replaced with workers on poorer terms and conditions. The fragmented nature of social care workplaces as well as hostile employers have meant union bargaining agreements are weakened successively as union density drops with many workplaces are left stewardless. Often social care tenders are little more than three to five years. This means vultures to swoop in for private equity. Social care has become financialised and millions of pounds are stolen from local authorities every year.  Every £13.35 of every £100 put in by local authorities goes to profit, that’s around £653m a year out of a total income of £4.9 billion.

Take for example Liverpool Homecarers Ltd, a seemingly small local company in the Merseyside area providing domiciliary care. A deeper look actually reveals they are a multinational company called Clece Care with investments in Madrid’s football stadium as well as providing services in construction, infrastructure maintenance and facilities management globally. They’re part of a group that made £1.4 billion profit a year. They were recently awarded a contract by Liverpool city council due to Covid-19 to provide additional care services in the region. Workers are asked to do visits of just fifteen minutes to service users, and up until recently were not paid in between calls between houses meaning the use of ‘cram’ calling was apparent. Cram calling is when carers are asked to make five-minute visits to each of the residents. The worker is then paid for a full 15 minutes, but it means they can actually make a decent wage and as care providers are seldom accountable to the local authority that commissions them they can fulfil the contract without the need to employ more staff, increasing their profits. Even during fifteen minutes visits adequate care cannot be provided as many service users are bed-bound, or have severe illnesses and need feeding, medication, washing and dressing.  In relation to the coronavirus, domiciliary carers travel from house to house, seeing upwards of 10 service users a day, it wasn’t until May that government guidance was updated to say it was required for domiciliary workers to be provided a fresh mask per visit.

Not only is there a vast expansion of private social care but it is subject to a process of primitive accumulation as money lenders, hedge funds and private equity firms capitalise on an ageing population and the deficit of time working-class people experience meaning care is outsourced with vast profits to be made. The commodification of care comes at a time when the work that was mostly undertaken by women in a one wage-earning household up until recently has been replaced by cheap and sometimes migrant labour as a two-earner house becomes more the norm. Although this of course was only the reality for the wealthy as working-class women have long suffered under the double burden of working for a wage in the day and for free in the home Women are working more waged hours, yet the workload in the home has not been reduced and care provision is still ultimately necessary.

What is to be done?

It is not merely from a moralistic perspective the organisation of carers as exploited workers across the UK is important, but also represents a key strategic imperative for feminists and socialists alike. What the Covid-19 crisis has revealed is the key nature of carers role in the functioning of the reproduction of life and the economy, as well as the vast support for carers as people stood on their front doors to clap them. Not only that but there are 1.8 million workers in the social care sector in the UK, making up a large and growing proportion of the economy.

Mass participation and base expansion is achievable when organising strategy encompasses political, community and industrial leverage as was seen during the Glasgow’s women’s strike, or LA and Chicago teachers strikes in the United States that used a bargaining for the common good framework to defend not just workers interests but the interests of our class as a whole. Simultaneously workers interests are vested within the wellbeing of their service users and are more willing to take action if the demands encompass that. Our job is to make an intervention to turn a struggle around the crisis of social reproduction into a material struggle with concrete tangible wins.

A key organisational asset to sectors doing work of a reproductive nature such as health, care and education is the broad-based community ties these people have and the ability to bring them into struggle alongside them. Carers have relationships not just with service users, but also service users families, all with a vested interest in the improvement of social care quality. The self-interest of the service users is often aligned with the interests of the workers themselves. Demands on social care can expand not just into insourcing workers as a second wave of austerity following the Covid-19 crisis will see council budgets cut even further. Demands can be made beyond this including, but not limited to, workers having more ownership of their work to be able to provide flexible and quality care that includes wellbeing trips and activities, expansion of hours to make work safe and manageable, better quality social housing for supported living and domiciliary service users to improve and support their overall health. This will be only achieved with strongly organised workplaces with worker power at the base to ensure quality care and good terms and conditions continue.

In a socialist imagination of what the care sector should look like, it should be envisioned in conjunction with a shorter working week to enable us to provide care for our elderly and sick loved ones. This doesn’t eliminate the necessity of specialist care provision or even basic tasks such as the necessity of two people to lift a service user safely, but workers should have autonomy about how the care is completed. This allows for carers to not just put the practicalities of looking after someone such as washing and feeding onto the agenda, but allows them to centralise general wellbeing and overall health into the work of caring.