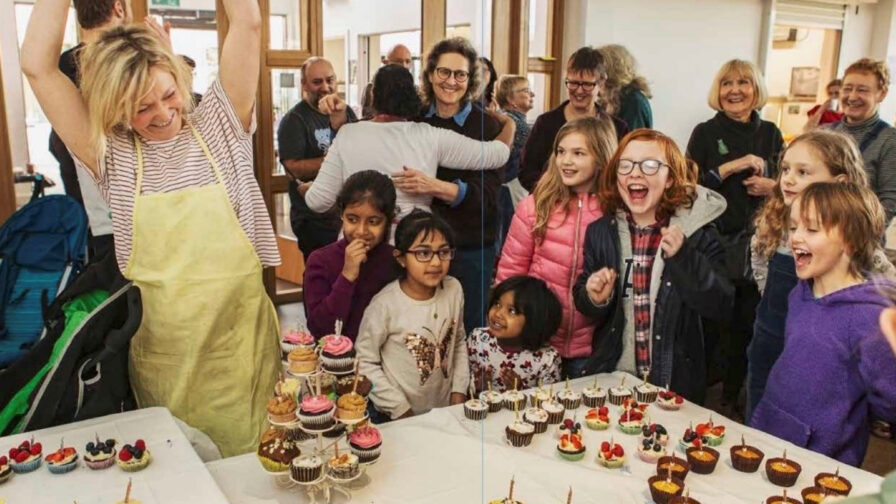 Determined to not let the pandemic prevent them helping struggling migrants the Big Breakfast are crowd funding for a cookbook to help feed them.

Like many small catering organisations, the Big Breakfast has suffered a financial hit from the pandemic. A team of volunteers from the Big Breakfast plan to create a fundraising cookbook to continue that much needed support to destitute migrants and have launched a Crowdunder to raise money to print as many copies as possible.

The diverse mix of recipes in the book have been donated by supporters of the Big Breakfast with a wide variety of cultural backgrounds. Old Trafford residents, local business owners and some of Manchester’s best-loved chefs have agreed to donate recipes to the fundraiser.  The Manchester chefs contributing to the book include, Mary-Ellen McTague of The Creameries, Eddie Shepherd of The Walled Garden, Monica Haldar of The Spice Club, Ginger’s Comfort Emporium and The Tibetan Kitchen.  The Unicorn Grocery co-operative, which specialises in vegetarian and vegan food is also contributing towards this cookbook in which all the recipes are vegetarian or vegan.

The Destitution Project runs a weekly drop-in session where service users get a free meal, charitable donations and the support and advice they need to help them rebuild their lives on a more stable footing. Linda Penrose, who has been running the Destitution Project for nine years, said. “Our service users are in a mixture of living situations. Some are in hostels, some are sofa-surfing, some are sleeping in the park.”

Due to the pandemic, the vital funds normally raised at the Big Breakfast have decreased dramatically, drastically affecting the charity’s ability to help these people, who are often refused any form of state aid.  From the first Big Breakfast event in February 2017, the team have raised over £20,000. Their current Crowdfunder has reached 36% of its £8,000 target and has 34 days left to raise the rest.

The Destitution Project supports a group of nearly a hundred refused asylum seekers. According to the Greater Manchester Together website, a refused asylum seeker is someone “whose asylum application has been unsuccessful and who have no other claim for protection.” Thus, meaning they are not eligible for state funding of any kind. Without the vital support of charities like the Destitution Project, these people would be left hungry and homeless in the middle of winter during a pandemic crisis.

Along with the majority of establishments across the country, The Big Breakfast closed its doors in March due to the first lockdown and are having to do so again during this latest lockdown. The volunteers have tried to keep up with fundraising through zoom events, but it has not been the same. One of the founding members of the Big Breakfast team, Bec Chow said “we wanted to create something that would allow us to raise funds for the Destitution Project even when the café can’t run.” She took the restrictions created by the pandemic and turned them into an opportunity for fundraising by asking members of the community to submit their favourite recipes.

The book promises to be more than just a cookbook. An eclectic mix of recipes is lined up, offering any readers taste buds a lockdown busting gastronomic journey around the world. Recipes dating back to the pre-war World War II years are mingled in with contemporary ones from diverse cultures and each dish has been photographed. Stories of the Destitution Project’s service users and key volunteers of the Big Breakfast will be interwoven throughout the book.

The Big Breakfast celebrating its birthday with some of the Old Trafford residents
The Crowdfunder is also offering rewards for a contribution. You can get a breakfast voucher (something to look forward to after lockdown), a copy of the cookbook and a tea towel designed for the charity by Manchester artist Stanley Chow.

Kate Green, MP for Stretford and Urmston said: “Old Trafford residents love meeting friends and neighbours at the Big Breakfast, and so do I. We’re proud to help the wonderful Destitution Project welcome and care for those fleeing the most desperate circumstances and who come here to seek asylum. And the breakfast is fantastic!”

Judith has been a regular customer of The Big Breakfast and is part of the editorial team putting the cookbook together.

To find out more about The Big Breakfast – click here

Feature image and in article images: The Big Breakfast