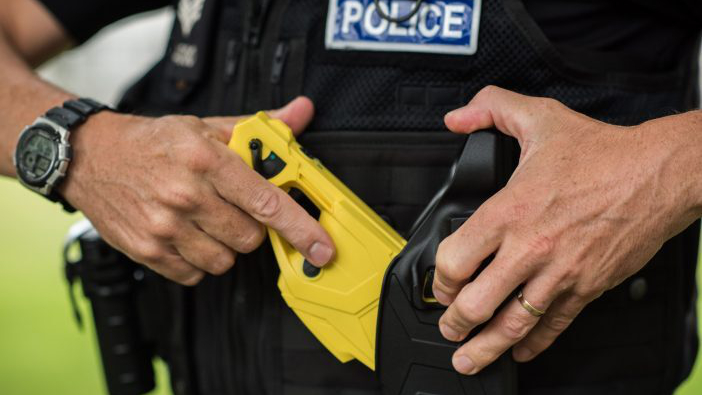 “Tasers should be abolished” say authors of Resistance Lab report which shows Greater Manchester Police increased their Taser use by 73% in a year.

A significant increase in Taser usage by Greater Manchester Police (GMP) poses a growing “threat to life”, particularly against BAME groups and people with mental and physical disabilities, the report says.

The research was undertaken by Resistance Lab, a collective of scholars, activists and grassroots community groups working to confront state violence in Greater Manchester, raises questions about the health and safety risks of Tasers, and highlights significant racial disparities in their usage.

The report found the rate at which GMP uses Tasers is rising quickly with an annual increase of 73%, from 832 incidents in 2017-18 to 1,442 incidents in 2018-19. This rate of increase exceeded the national average of 39%, as well as that of other forces such as the Metropolitan Police, which reported a 49% increase.

Human rights and medical experts have raised concerns about the health and safety risks associated with Tasers, including the potential for cardiac complications leading to death, the report says. It also presents evidence that these risks increase when Tasers are deployed against children or vulnerable adults suffering from underlying health issues such as cardiac and pulmonary conditions, diabetes and epilepsy.

In 2018-19, GMP reported 118 uses of Tasers against children under the age of 18, including eight against children under the age of 11. This is more than any other police force in England and Wales apart from the Metropolitan Police. In the same period GMP reported that individuals perceived by the officer to have either physical or mental disabilities constituted 15% of total incidents involving Tasers.

The report also found that GMP have used the weapons disproportionately against black people. In 2018-19, black people were subject to the use of Taser by Greater Manchester Police at nearly four times the rate of white people.

Laura Connelly of Northern Police Monitoring Project said: “Focusing on Taser use, this report amplifies concerns that affected communities have been raising for some time. It shows that we cannot – and must not – accept the disproportionate use of Taser against Black communities, or its use against children and people with mental health conditions.

“As the report argues, we must go further in our demands: Tasers should be abolished.”

Introduced in 2003 as a “less lethal” alternative to firearms, Tasers have become the widely accessible weapon of choice deployed by officers. The report cites Home Office figures showing a rapid escalation in police access to and usage of Taser. The use of Tasers by police forces across England and Wales has increased by more than 500% over the last decade, from 3,573 incidents in 2009-10 to 23,451 in 2018-19.

The report also contains testimonies of individuals and families directly affected by the use of Tasers by GMP officers to promote better understanding of the ways in which expanded police access to and usage of Tasers has impacted Greater Manchester’s communities.

Assistant chief constable Nick Bailey, force lead for Specialist Operations at the GMP said in response to the report:

“Our priority is to protect our communities and keep them safe. Greater Manchester Police strives to be a minimal force organisation, with less than 1% of incidents we deal with currently resulting in a use of force.

“It is often the case that having a Taser-trained officer present at an incident – including those that may involve a weapon, serious assault or violence towards officers – can resolve a dangerous situation quickly and safely. This prevents them from escalating and often the situation is resolved without the Taser being discharged.

“As the nature of crime has changed and with assaults against officers becoming more frequent, we increased the number of officers within GMP who are Taser trained following a review in 2017. This was done in order to more effectively respond to every incident in a proportionate and safe manner to protect the public.

“Although the number of incidents involving a Taser grew from 2017-18 to 2018-19 due to the number of trained officers increasing, the percentage of total Taser incidents where a Taser was not discharged has increased by 6%.

“Our figures also show that incidents involving a Taser have reduced with the latest figures from 2019-20 showing a drop from 1,442 to 1,336.

“I want to reassure our communities that we work hard to ensure that everyone in Greater Manchester receives fair, proportionate and equal treatment by GMP. All use of force incidents are closely reviewed…”

In response to the report deputy mayor of Greater Manchester Beverley Hughes, told The Meteor:

“It is essential that the police uphold the law in a fair and consistent way and are seen to be doing so by the public.

“However it is clear that, across Greater Manchester, Tasers are used proportionately more frequently against people from Black and minority ethnic groups compared with other groups. We are working hard to understand this as we prepare to publish in the autumn our first ever Greater Manchester Race Equality Policing Report on the use of a wide range of policing powers including Tasers.”

The report comes as Black Lives Matter protests in Manchester have begun critical conversations about policing in the city. Its publication coincides with the court case of Desmond Ziggy Mombeyarara, who GMP officers shot with a Taser in front of his five year old son on a garage forecourt. The IOPC has launched an investigation into GMP’s handling of the incident.

Following the incident Labour party activists signed a letter to mayor Andy Burnham and deputy mayor Beverley Hughes calling them to meet with BAME groups and councillors, and assure BAME communities that GMP was meeting its Public Sector Equality Duty.

Manchester councillors Ekua Bayunu and Sohayalla Wilson said, “We are still hoping that the deputy mayor, Baroness Beverley Hughes would reach out to activists like ourselves in order to show a positive dialogue is being constructed over the policing of minoritized groups. Otherwise the Greater Manchester Race Equality Policing Report is nothing more than a PR exercise intended to clear GMP of allegations of institutional racism.”