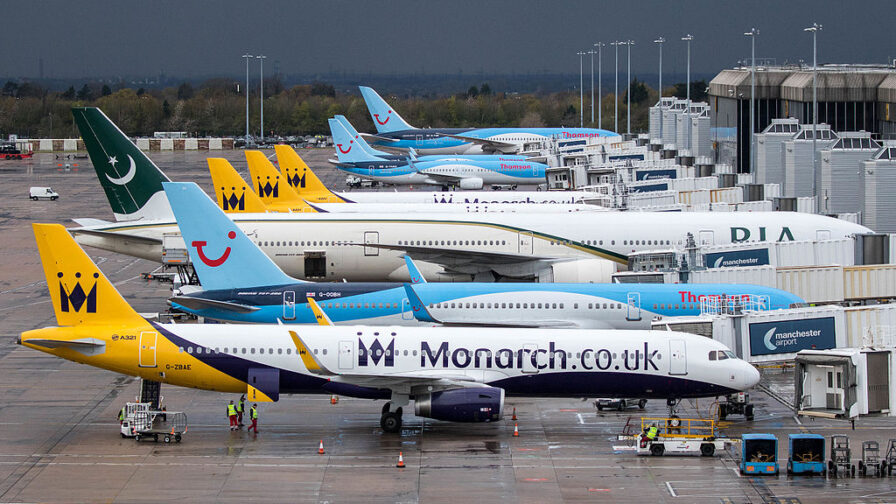 Greater Manchester councils agreed to provide a finance package of more than £250m to Manchester Airport Group to alleviate the impact of the Covid-19 crisis on the airport.

An open letter addressed to the ten borough councils of Greater Manchester calls on them to rethink the bailout of more than £250 million offered to Manchester Airport last week. The letter requests that all GM local authorites commit to a post-lockdown economic recovery that addresses the effects of the Covid-19 crisis on Greater Manchester residents and workers without neglecting their responsibility to tackle the climate crisis.

The letter has been signed by eleven organisations concerned about the climate crisis in the city region, who think the bailout is a step in the wrong direction. The ten boroughs making up the Greater Manchester Combined Authority own 29% of the airport group, with Manchester City Council holding the largest share of that stake.

The local authorities plan to borrow the money from the government’s loan board with Manchester City Council responsible for the largest share of the loan package at around £143 million, with other GM councils reported to be responsible for around £13m each.

The argument put forward in the letter suggests that the decision to bailout Manchester Airport Group (MAG), as a business strategy, directly contradicts the targets outlined in the Climate Emergency declaration made by various Greater Manchester councils in July last year. The letter cites a report published by Cambridge University in February which said that the only way the UK can meet its legal obligation of hitting net zero carbon emissions by 2050 is to shut all UK airports by 2050. The council set a 2038 net-zero target in 2018.

The signatories argue that any economic stimulus must be directed instead at decarbonisation, and that loans and bailouts must be offered to workers themselves. They call upon Manchester City Council, as the largest shareholder of Manchester Airport, to use the economic stimulus required for the post-lockdown recovery to create jobs in socially reproductive industries and green infrastructure projects, such as the retrofitting of housing stock and social care.

The eleven signatories also allege that plans to loan this large sum of money were not published anywhere in the public domain, including in any council agenda items or notices of decision. The open letter signatories are:

In response to the arguments set out in the letter, a Manchester City Council spokesperson told The Meteor:

“Expressing ‘solidarity’ with the tens of thousands of workers whose livelihoods depend, directly or indirectly, on Manchester Airport while simultaneously condemning investment to support those jobs is a contradictory position.

“The economic importance of Manchester Airport to the city and Greater Manchester as a whole cannot be understated. We cannot accept the underlying logic of this letter which seems to wish the airport out of existence.

“Failing to support the airport at this challenging moment would create significant potential damage to the livelihoods of people in the city and region without corresponding environmental benefits. Undermining Manchester Airport would simply mean more people flying from other airports with no overall reduction in carbon emissions.”

The council spokesperson recognised the “urgent need to limit and reduce aviation emissions” but insisted that this could only be achieved “within a national and international framework, working with governments and the aviation industry.” He went on to say:

“It should be noted that the Manchester’s Climate Change Framework, the document which is guiding a wide range of partner organisations across the city, includes the objective: ‘We want the emissions from all flights from Manchester Airport to be fully aligned with the Paris Agreement. We believe this means operating within a limited carbon budget for UK aviation, as part of a wider international budget’.”

The Paris Agreement, which was signed by 189 countries in 2016, sets out a goal to keep increases in global mean surface temperature to well below 2°C above pre-industrial levels by 2100 and to pursue efforts to limit this increase to 1.5°C.

The council spokesperson highlighted specific actions it and MAG were taking to meet the Paris Agreement, such as working with the UK Government to help develop a UK aviation strategy in line with the Agreement ensuring:

“We remain fully committed to Manchester becoming a zero carbon city by 2038 at the latest and are making extensive investments in everything from retrofitting buildings to buying new electric waste collection vehicles in line with our Climate Change Action Plan,”

Rebutting accusations of a lack of transparency surrounding the decision, Carol Culley, deputy chief executive of Manchester City Council, said that the council “always seek[s] to be as transparent as possible about [its] investments”, but that at the moment this is “commercially sensitive.”. Culley went on to say:

“It was, and remains, our intention to put as much information in the public domain as is appropriate at the point where we are able to do so.”

The full text of the open letter is published online on the Action Network website, and the text, minus the previously mentioned signatories, is included below:

We, the undersigned, are calling on the ten borough councils of Greater Manchester to rethink their financial package of more than £250 million to Manchester Airports Group (MAG), and commit to a post-lockdown economic recovery that addresses the effects of the Covid-19 crisis on Greater Manchester residents and workers without neglecting their responsibility to tackle the climate crisis.

The declaration of the financial package of £250million to MAG from the borough councils has concerned us. The plans to loan this large sum of money were not published anywhere in the public domain, including in any council agenda items or notices of decision. Along with Manchester City Council’s suspension of the planning committee, this signals a lack of democracy and we call for democratic decision making processes to be reinstated.

We express solidarity with the airport workers who are suffering job losses as a result of this crisis; but economic stimulus must be directed at decarbonisation, and prioritising green investment. Loans and bailouts must be offered to workers themselves, not to MAG which has a business plan that directly contradicts the targets outlined in the 2019 Tyndall report, and the Climate Emergency declaration made by various Greater Manchester councils last spring.

While other authorities, such as the French government, are only bailing out carbon intensive industries, including aviation, with conditionalities such as the drastic reduction of domestic flights, statements from senior figures at Manchester City Council indicate that plans include expansion of the airport and the creation of additional tens of thousands of jobs in an unstable sector – a clear step in the wrong direction.

A report published by Cambridge University shows that if the UK is to meet even its legal obligation to meet the 2050 carbon budget at the current rate, all UK airports must close by mid century. A clear strategy to reduce the councils’ dependency on aviation revenues is long overdue.

The income generated by MAG last year was £73 million, shared between the ten borough councils  (Airlines expected to only recover to 50% over 3 years, not predicted to bring in the levels of income it has done over next 5 years (rephrase this)) so this investment of more than £250 million is unjustified and dangerous in the face of the climate crisis.

Instead, we call upon Manchester City Council (as the largest shareholder) and the nine other borough councils to use the economic stimulus required for the post-lockdown recovery for the benefit of Greater Manchester’s future.

We encourage job creation in socially reproductive industries such as green infrastructure projects, the retrofitting of housing stock to reach zero-carbon emissions targets, and with much needed large scale investment in social care. The airport workers facing job losses should be redeployed to support a modal shift in the transport sector from aviation to rail wherever possible, as part of a co-ordinated and publicly owned integrated transport system.

We need a recovery that is just and fair, in line with calls from economists, climate activists, and even the current Shadow Secretary of State for Business, Energy and Industrial Strategy. We can’t return to business as usual once this crisis is over.

Greater Manchester has always been at the forefront of social change and cities work best when built for their citizens. These calls are in line with that ethos and we expect them to be taken into serious consideration by our elected officials.