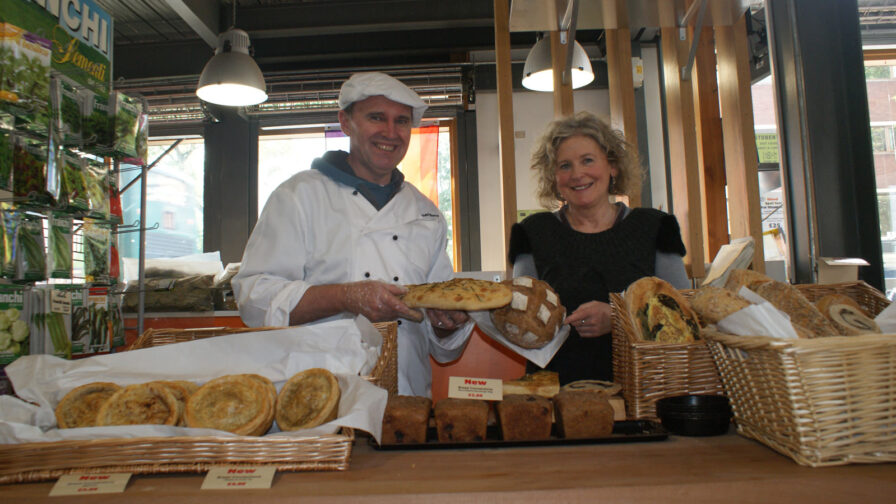 Pairo Forooshani speaks to Eighth Day Co-operative member Kevin Taylor about what its like to work at one of Manchester’s oldest worker co-operatives. Part of the Co-operative Manchester series.

The Eighth Day Co-operative, which runs a café and shop in Manchester City Centre, is one of the longest running worker co-operatives in the North West and a respected provider of good healthy food to vegetarians, vegans and omnivores across the city. Formed in 1970 as an “attempt to escape the clutches of capitalism”, their website says, the original partnership set up above a boutique on New Brown St, in the city centre. They moved to Oxford Rd in 1972, after the boutique burnt down, where they diversified into selling wholefoods as well as clothes. It was here in 1976 they formalised their operation as a co-operative by their incorporation as a workers’ co-operative.

Since then the business has gone from strength to strength expanding into new premises at 111 Oxford Road and opening, what has become, a thriving vegetarian and vegan café alongside their shop selling food, drinks and body care products.

The Eighth Day has built on the firm ethical footing being a co-op has given them. They are an accredited Living Wage Foundation employer and have also been awarded the Fair Tax Mark due to their fair and transparent approach to paying taxes. The Eighth Day shop stocks over 200 Fairtrade lines and they have firm ethical buying and environmental protection policies.

Eighth Day co-op member Kevin Taylor, answered The Meteor’s questions about why they set up their co-op and what the benefits and challenges are of being part of it:

The Eighth Day is an institution really. What caused it to come about, was it part of a broader movement?

Well I think the original people that set up the co-op, it was more of an idealistic sort of antidote to the capitalist model, if you like, but I think it was a different way of operating a business with the membership having a direct say in the business rather than a top down model.

So the original Eighth Day pioneers firmly believed in co-operativism?

Yeah, exactly. The Eighth Day is an industrial providence society, a co-op. We have staff of about 30, about half of those are co-op members; who have a direct say in how the business is run and are, if you like, on the board.

Is that the best thing about being in a co-op, the communal decision making, or is it the biggest challenge?

Well the main attraction to me, and I’ve worked here for about 3 years, was as a co-op member, and an employee – one of the chefs in the café – I have a direct say in how the business is run in conjunction with all the other members.

We discuss and vote, we bring forward ideas and we vote on them basically, it’s very democratic. On the down side, that can slow down decision making to a degree, because there are so many people that want to have a say.

But generally speaking, it’s discussed and a majority vote will hold sway going forward, so decisions do get made. But as I say, because more people have a say, you have considerate decision making rather than off the cuff decision making. So that’s good really for stability.

People working in the corporate world have described to me that they feel the pinch of being exploited almost physically. I’m guessing that because of the way co-ops are run. you’d never experience that in a co-op because it’s not an exploitative environment. Is that the case?

We have strict criteria to work by. For instance, we pay the living wage, we buy fair trade products, we deal with other co-ops, not exclusively but we do most of our business where we can do with other co-ops and local businesses. We have one eye on our environmental impact, so a business with a conscience really.

I think hopefully most people that work here, members and non-members, would feel that they are treated very well compared to the hard-edged commercial world, particularly in catering.

Bearing the burden of that conscience. Is that also your biggest challenge in some ways?

It’s difficult, as everyone knows, it’s quite a difficult place to operate now, the high street, for small retail businesses. There’s a lot of competition online and from the big guys, and everybody sells vegan and vegetarian food these days, even the supermarkets.

A term that’s bandied around  a lot is the “solidarity economy”. You are encouraged to try and shop at fair trade suppliers, or other co-ops and businesses that are part of this economy. Should this solidarity economy be encouraged so that we have an alternative to the current system to step into?

I think it’s an area of business that can and should grow. It will never take over in a democratic economy – all forms of business will work alongside each other. We’ve got to pay our fixed costs like any other business. We’re living in the real world, so we have to make a profit and operate professionally, give a good service and grow our business. So we’re no different to any other business like that.

So alongside the industrialisation process in this country, co-operatives arose to counterbalance the exploitation of capitalism?

Counterbalance is a good way to put it, yes. Rampant capitalism is not great for the environment and for the exploited workforce, so I think the co-operative way of doing things is a good counterbalance.

People in the region recognised this exploitation centuries ago and did something about it by forming the co-operative movement. Now similar questions around economic exploitation are being raised again and it seems Manchester is coming back to look at co-operativism and asking can we breathe life into it again. What is it about co-ops that makes them worth promoting?

It’s about trying to get people more involved in their workplace and sharing equally the fruits of their labour really. I know that sounds a bit pretentious, but it’s based on sound principles. The fact that co-ops like ours have been going since the 1970s – we’re one of the longest serving independently businesses in Manchester, 50 years old – which means we’re doing something right.

Is there anything else you’d want to touch on with regards to the Eighth Day and co-ops, or co-op solidarity? Do you think left-leaning people come here for more than just enjoying the products?

Yes, I think we have a strong presence in the community and a very loyal customer base who’ve been coming here for years. That’s important – to have a link with the local community and we do support and trade with other co-ops. Suma Wholefoods, Essential Foods in Bristol, both big co-ops that have similar principles to ourselves, so it makes sense to trade with each other.

We also bank with the Co-operative Bank and Co-ops UK is the organisation we go to for advice, which advises co-ops throughout the country with legal and employment law and so on. So the co-operative movement is going strong, and we want to support it, and hopefully see it grow.

Every business is worried about Brexit, or economic slowdown, but with regards to how you respond to this challenge, will it be different? What will happen to you as a cooperative business coming into what might be a tougher period in the future?

I think any business starting up would find it difficult now in the present economic environment, but we have been here for 50 years, and there have been various peaks and troughs along the way. I think Brexit probably will present issues regarding supply chains and costs, that sort of thing, and possibly staffing issues as well.

Probably a quarter of our employees I would guess are EU nationals. We have people from Italy, Spain and Poland – yeah, various countries. They’re obviously working hard with us as a unit and through their hard work adding to our economy in England.

What it like working here now with the two floors, the shop on top and the restaurant downstairs?

It’s a modern building, the kitchen facilities are great really. They’ve got a lot more shop space upstairs than in the original building, so it can offer more choice for the shopper, give them a better shopping experience. We’re on Oxford Road in the middle of the student area, the big development at Circle Square and all the new developments in the city centre. It’s great for us really so we’re looking to grow and grow.

This article is part of a series called ‘Co-operative Manchester’, which is investigating the past, present and future of co-operatives in the city and the surrounding region. The series aims to increase public understanding of the part co-operatives can play in building an ethical economy and stronger communities. It will also highlight the great work individual co-operative’s are doing across the city and mark The Meteor becoming a media co-operative this year.