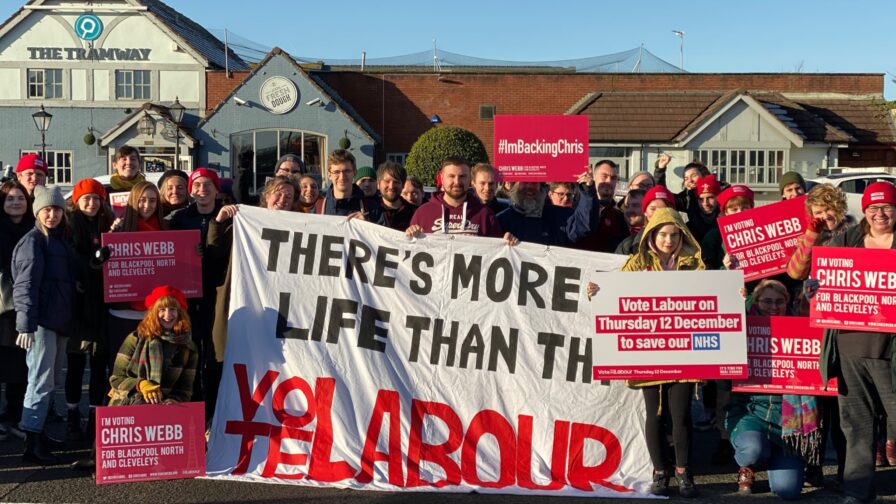 In the run up to the 2019 General Election Manchester Momentum have proved to be the largest political mobiliser in the North West. The secret to their success is their cultural strategy, says Andrea Sandor.

In August, three months before the election was announced, Manchester Momentum took a gamble. They printed pledge cards that read ‘General Election 2019’. The gamble paid off when the election was called for three weeks shy of the end of the year.

Isaac Rose, a Momentum organiser in Manchester, says they needed to lay the groundwork: “We were getting into people’s heads that an election was coming and there was a fight on our hands – and getting people into the headspace where they could conceive of sacrificing a lot of time to help get Labour elected.”

The pledge cards asked for contact information, how many hours a week someone was willing to devote to the campaign, and whether they’d be willing to door knock, phone bank, or contribute in another way. These cards were handed out at various events, including raves, football matches, book clubs, and discussion groups.

By the time the election was called in late October, Manchester Momentum had collected 400 pledges. Isaac says this number quickly rose to around 1,000 through their networks.

The group’s preemptive organising has worked, making them the largest mobiliser in the North West. They’ve consistently sent 100-300 canvassers on weekend “away days” to door knock for Labour. They’ve also provided door knocking training, which encourages canvassers to strike up conversations at the door, ask people what issues matter to them, and share their own personal reasons for canvassing.

While their strategy was initially to target six marginal constituencies, they were able to add two more targets to the list because they’d mobilised so many people.

A young Momentum member in her twenties tells me the group have been criticised for sending so many people to one constituency, rather than spreading the resource. For example, why send 300 to Altrincham instead of 50 to six different constituencies?

“You go on these away days because 300 people are going,” she explains, “It’s an event, it’s exciting!”

On the logistical side, Isaac says it’s far more feasible to organise coaches and meals for 300 in one location rather than 50 in six. “It’s really important to us that we take care of our activists and they’re looked after,” he says. They have a team of #Bakers4Labour who cook for their canvassers on away days.

Manchester Momentum are an autonomous branch of Momentum and have no paid organisers. Isaac tells me their mobilising success also isn’t thanks to support from any MPs or ‘left celebs’ like Owen Jones but is the result of a ‘cultural’ strategy they adopted three years ago.

Like elsewhere around the country, Corbyn’s leadership galvanised a segment of young people in Manchester who flocked to Labour and were keen to get involved. However, many found the branch meetings boring and not particularly welcoming.

People like Isaac, who were already involved in grassroots organising and energised by Corbyn’s leadership, were concerned the party would lose the new members. Therefore, they took the conscious decision to turn to culture instead.

This involved organising parties, football clubs, film screenings and discussions to attract and engage people. This engagement then started to translate into political involvement. As Isaac and Beth Redmond have recently written: “We would organise a football game on a Tuesday and the same players would turn up to an antifascist demonstration at the weekend.”

This was about “making politics fun”, creating spaces for people to come together, develop a sense of camaraderie and shared sense of purpose.

“Branch meetings can be so so dull and are not the way to get young blood into the movement … Something we talk about a lot is this idea of ‘collective joy’ and having these powerful shared common experiences.

“In the last 30, 40 years, a succession of politicians have done their best to close off these public spaces where you feel these moments of collective joy, and we’re trying to open them up again for new people, so they can have these experiences that really do change your politics and change the way you think about yourself and your community.

“And whether it’s football or a rave or whatever, I think these are all really special ways of doing that and that’s why the people who are involved are so much in it for the long haul than if we’d just been going to branch meetings.”

Billy’s words bring to mind the concept of “communitas”, the state in which a group of people feel a special sense of togetherness. Anthropologist Edith Turner wrote communitas “has to do with a sense felt by a group of people when their life together takes on full meaning.” Shared collective experiences like dance and sport can facilitate communitas. No doubt so can the adventure of travelling with 300 like-minded people to Blackpool to canvass for a new world order.

Manchester Momentum’s cultural strategy didn’t come from out of nowhere. In many ways, it harks back to a tradition of Socialist Clubs in working class communities. The group’s immediate antecedents, however – which predate Jeremy Corbyn’s rise to the leadership – include the Manchester Spring series of public political discussions (held in 2013) and Salford Community Theatre (founded in 2014).

Isaac has written about these “political currents” which informed Manchester Momentum, explaining: “Central to this current of thought was the sense that for the left to regain political power it had to harness cultural forms to become normalised and popular. Left ideas would have to re-enter everyday consciousness as something that was understood as common sense. These ideas sit at the core of the political and intellectual project for building new forms of cultural engagement.”

On a practical level, Manchester Momentum’s cultural strategy has led to a highly competent group of organisers with experience of arranging social events. This has translated into the skills necessary to organise political events and hundreds of canvassers.

“Our year round movement building meant that not only were people already mobilised, our organisers had developed their capabilities so when the election was called they were ready,” says Isaac.

Organisers have also developed the relationships among one another and the trust that Isaac believes is also critical to the group’s success.

Another pillar of Manchester Momentum’s approach has been developing relationships with other local left groups, covering a broad range of social issues from housing to anti-deportation to the climate. They have particularly close links to ACORN Tenants Union and Partisan, a co-operative arts and social space.

Isaac says they’ve “strengthened and thickened” their networks, mobilised huge numbers of people, and have become a force to reckon with in the coming years. Come what may after Thursday, he believes Manchester Momentum are here to stay and are part and parcel of a social movement that will change the character of politics in Manchester, which has been dominated by a right Labour Council for decades.

“We have a durable institutional left that didn’t exist before Corbyn,” says Isaac, “and whatever happens, it will stay.”