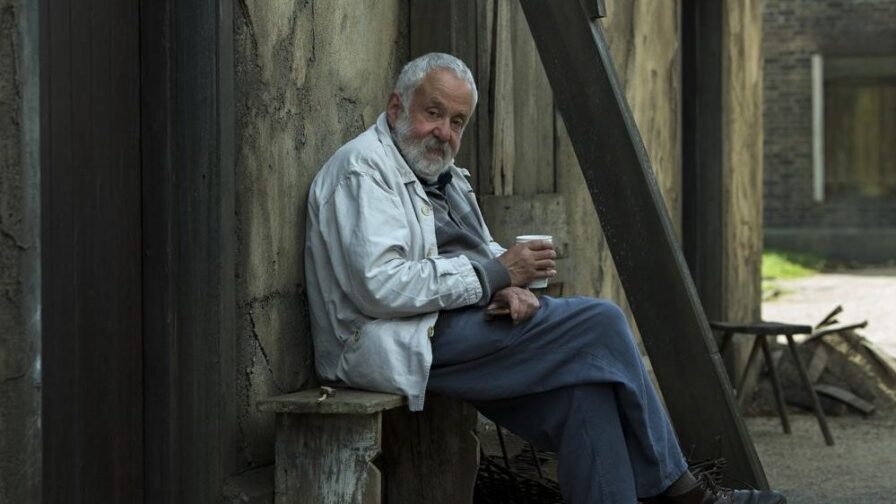 To round up a  host of events to commemorate the bicentenary of Peterloo over the weekend, acclaimed film director Mike Leigh attended a screening of his film Peterloo, at HOME Manchester, and answered the audiences questions on it’s relevance for life in the UK today.

Film director Mike Leigh invited us all to join him at HOME Manchester for a pay-what-you-can screening of his historical film Peterloo, followed by a live Q&A. After a weekend full of song, poetry,drama, marches and rallies marking the 200th anniversary of The Peterloo Massacre, Leigh’s poignant film was a fitting way to reflect upon that tragic day. A day that steeled the resolve of following democratic reformers who eventually brought about a more inclusive form of democracy in the UK.

The screening and Q&A, last Sunday at 4pm, offered up many parallels between the time of Peterloo and the current problems society faces today: growing food poverty, housing crisis, increasing homelessness, widening inequality and a growing unease with the failings of our democratic systems.

1/ March for
Democracy, in honour of the bicentenary of #Peterloo
, was a resounding success today.

Despite the
actions of far right activists during the march. pic.twitter.com/wp0FPAXyni

One member of the audience referred to the Vagrancy Act as a thread which ties the present to the era of Peterloo. Introduced in 1824, The Act criminalised thousands of ex-servicemen who found themselves injured and homeless after they fought for their King during the Napoleonic Wars. Almost 200 years later, the Vagrancy Act is still being used to arrest, prosecute and criminalise some of the most vulnerable people in society, just for sleeping rough or begging.

Leigh’s film follows the tragic character of Joseph, a working class boy who struggles with PTSD, due to the horrors he experienced at the battle of Waterloo. The opening scene follows Joseph on his walk from the battlefield, through isolated country fields, before finding his way home to Manchester where he is cradled in his mother’s arms.

Joseph then struggles to adapt to life at home during times of destitution and high unemployment. Poetically, Joseph meets his end during what the press of 1819 dub Peterloo, due to its similarities to Waterloo with cavalry charging, sabres drawn, killing and wounding anyone in their path. Although this time they were charging on peaceful civilians, rather than an opposing army’s soldiers.

The role of the press at Peterloo was also a topic for discussion. The film portrays a distrust of the mainstream media, as the Times of London reporter is greeted with suspicion. But it was the Times and other papers of the day which accurately reported the carnage and dubbed it the Peterloo Massacre.

It’s a far cry from the Times attitude to those events today. A recent editorial in the Rupert Murdoch owned paper, commented that the event had “no wider historical significance, and did not ‘change Britain’ beyond feeding a tendentious account by left-wing historians of Britain’s traditions of radical protest”.

In the aftermath of Peterloo we saw the emergence of a new wave of media with the founding of the Manchester Guardian two years later. Mike Leigh responded to the suggestion that rise of independent digital media in the shape of The Meteor, the Salford Star and the Bristol Cable provides hope for giving radical voices a platform. He told the audience:

“It’s lamentable that anything that gets reported in the media is reported inaccurately. As to the media in the digital age, there is much to be terrified of, depressed by and to lament. But at the same time it is a tool for voices and one can only hope the voices you’re talking about will grow and be heard.”

A popular view from the audience was the importance of retelling the story of Peterloo and the disappointment in its absence from their school curriculum. Even Leigh admitted that “for a lot of us who grew up round here, we didn’t know about it. From my primary school in Lower Broughton, you could have got us down there and walked us round and said this happened here and have us back in school by lunchtime.”

For Leigh making the film was important in sharing and illuminating a vital piece of history and making it accessible to everyone in a period in which the themes have become increasingly relevant. The film is the story of ordinary people fighting for democracy, told to an audience at a time when democracy is  “under a lot of stress”.

He says it is important to recognise the lessons taught by those brave martyrs. He said: “If those people had a time machine and came to now,  they would be outraged, offended and disgusted by the fact that we have the vote and people are cynical about the vote, they don’t want to vote that they don’t understand what they are voting about. They’d be appalled.”

Feature image and all in article images: HOME