At least 449 people died while homeless in the UK, over the last twelve months

As homelessness and the misery it entails increases across the United Kingdom, a collaboration by local journalists, charities and outreach groups has for the first time recorded the numbers of homeless deaths over a year. A figure which national and local authorities scandalously fail to calculate, collate and publish, despite the growing homelessness crisis. The investigation reveals that at least 449 people have died homeless across the UK, from 1 October 2017 to 1 October 2018.

The definition of homeless used for the investigation included rough sleepers, those in temporary accommodation like B&Bs and hostels, or those long-term sofa-surfing. Reports for homeless deaths were collected from England, Scotland, Wales and Northern Ireland (see graph below for breakdown). The figures were compiled by different means in different regions due to the lack of a national framework for recording homeless deaths.

Newspaper reports, Freedom of Information requests, and reports by homeless charities were some of the means used to collect information.  A high number of deaths, 109, were recorded in London probably due to it statistically having the highest rough sleeper count in the country and also due to the centralised CHAIN database peculiar to London, which records information on the wellbeing of homeless people. Data collected by The Bureau of Investigative Journalism (TBIJ) adds to this by identifying homeless deaths not in the CHAIN database.

The data collected from Northern Ireland is notable due to the country being unique in the UK in having a Housing Executive where responsibility for homelessness is centralised and homeless deaths are recorded. For that reason, all but one of the 149 deaths recorded there came from a Freedom of Information request to the Housing Executive, which has arguably the closest thing in the UK to a country-wide collated official statistic for homeless deaths, which it does not publish.

Fifteen homeless people are recorded as dying in the North West, and nine of those are listed as dying in Manchester. Their names are: 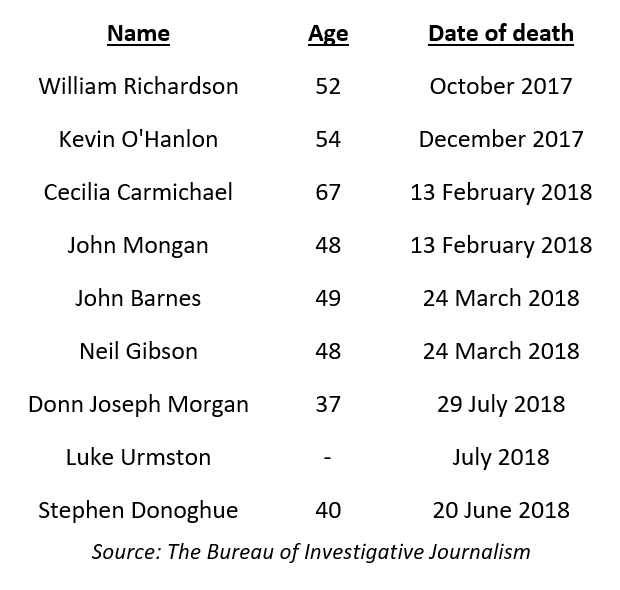 Seven of these people who died while homeless in Manchester were first reported by the Manchester Evening News (MEN) in the excellent article ‘The deaths they don’t count’, and further information about some of the people above can be found in that article. Cecilia Carmichael and John Mongan were not mentioned in the MEN story, their details were supplied to the collaborative investigation by a local charity.

The rise in homelessness is readily apparent to anyone who walks through towns and cities in the UK. Across England the number of people accepted as statutorily homeless has risen from 53,480 in 2012 to 57,890 in 2017, an 8.2% rise in five years. Rough sleeping has also increased across England from 2,309 in 2012, to  4,751 in 2017, a 106% rise. However, these figures are widely criticised as severely undercounting the problem, and there have been regular and repeated calls to improve them, as yet to no avail.

The homelessness problem in Manchester is particularly acute when compared to levels across England. People accepted as statutorily homeless has risen from 547 in 2012 to 1241 in 2017,  a 127% rise across Manchester in five years. Rough sleeping has rocketed from 27 in 2012 to 94 in 2017 a massive 248% increase.

The research collaboration was initiated by The Bureau of Investigative Journalism, a not for profit organisation that recently set up a Bureau Local division to help local journalists and organisations collaborate on stories of national importance. TBIJ emphasise that the data collected was far from definitive and said “we know this is likely to be a large underestimate” of the total homeless deaths across the UK over the last year. TBIJ are still collecting information on homeless deaths to improve the data on their Dying Homeless counting page, and ask anyone with relevant information to submit it there.  Due to the incomplete and varying nature of data collection, no direct comparisons can be made between regions.

This investigation may however help the Office of National Statistics (ONS) to produce its own set of figures for each region that could be compared to each other. The ONS have asked for access to the TBIJ collated database in order to compare it to information they have collected from death registrations, to help them produce their own estimates on homeless deaths across the UK.

“To think of just one person dying due to the consequences of poverty and homelessness is appalling, but to learn of the sheer scale of those who’ve lost their lives in the past year is nothing short of horrifying. This is a wake-up call to see homelessness as a national emergency.

“Behind these statistics are 449 unique human beings, ranging from teenagers to people in their 90s – a gardener, an astrophysicist, musicians, fathers and mothers, sisters and brothers. Not only will 449 families or significant others have to cope with their loss, they will have to face the injustice that their loved one was forced to live the last days of their life without the dignity of a decent roof over their head, and a basic safety net that might have prevented their death. No-one deserves this.”

For those 128 people on the database that had information on where they died, more than 68 died on the streets, 16 died in hospital and 47 in temporary accommodation. They died from terminal illnesses, suicides, drug overdoses, violence and other reasons – with ages ranging from 18 to 94-years-old. January was unsurprisingly the worst month for deaths, considering the bitter winter we had, with at least 33 people dying in Great Britain.

It was during that bitter winter that The Salford Star reported on the possible homeless death of a man found lying lifeless in a doorway in Piccadilly Manchester on the 17 December 2017. A voluntary worker for local homeless charity found the man and said “I could tell just by the colour of his skin and face that there was something drastically wrong”. An ambulance was called to take the man away. The Star’s investigations with the ambulance service, and the local hospital, determined that a man was taken to hospital but they wouldn’t give more details, and Greater Manchester Police said they had nothing logged on the incident.

The Star submitted an FOI request to the trust responsible for the Manchester Royal Infirmary where the man was taken, asking about homeless deaths over the Christmas period, the hospital admitted there had been homeless deaths over that period but refused to give numbers or further details. Does this potential homeless man’s death correspond to Kevin O’Hanlon who is mentioned as dying in December in the MEN report and in TBIJ’s data?

The difficulty in investigating homeless deaths highlighted by the reports by The Salford Star, MEN and TBIJ, highlight the need for an organised system of recording and reporting these deaths. Sparkes suggests modifying current protocols to address the situation, saying:

“We must insist that these deaths are officially investigated and recorded. The Safeguarding Adult Review (SAR) system, which is currently used to investigate the deaths of vulnerable adults, should be extended to include cases where a person has died whilst homeless and living on the streets. This will allow us to have a more accurate picture of the number of people who die on our streets.”

Since October last year a coalition of homeless charities have been lobbying the Secretary of State to instruct NHS digital to agree a common national data standard. Alex Bax, chief executive of homeless charity Pathways, which is a member of the coalition, says that these changes could prevent the death of homeless patients in hospitals and allow them to be “routinely identified and supported”, and hopes the NHS will implement these recommendations.

Praising the investigation by TBIJ as an “important” one that describes “the true brutality of our housing crisis,” Polly Neate, chief executive officer of the homeless charity Shelter, went on to say:

“Rising levels of homelessness are a national disgrace, but it is utterly unforgivable that so many homeless people are dying unnoticed and unaccounted for.

“Unstable and expensive private renting, crippling welfare cuts and a severe lack of social housing have created this crisis – and at Shelter we see first-hand the suffering it causes – from families trapped in cramped and dingy B&Bs, to those forced to endure the dangers of sleeping rough.

“To prevent more people from having to experience the trauma of homelessness, the government must ensure housing benefit is enough to cover the cost of rents, and urgently ramp up its efforts to build many more social homes.”

The data used to produce this article was collated by the TBIJ and collaborating journalists and organisations across the UK. The Meteor did not contribute any data to this collaboration, but thanks all those that did.