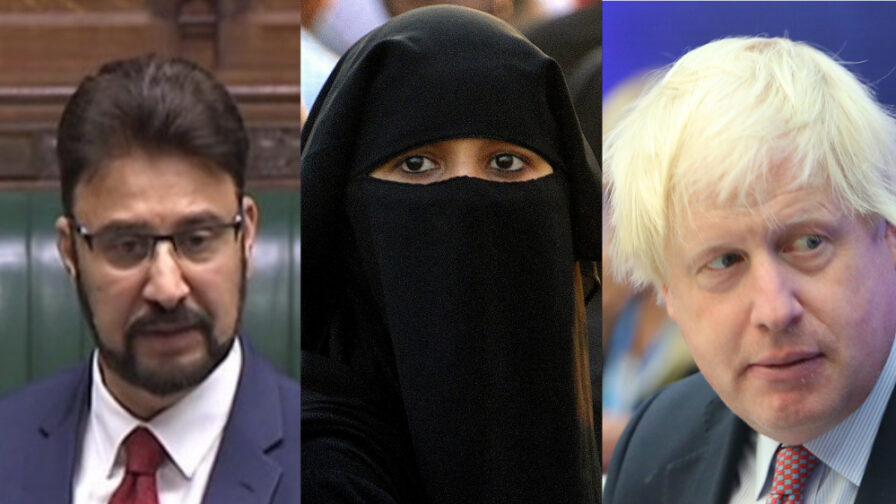 Boris Johnson has been accused of Islamophobia by Manchester MP Afzal Khan, who supports the call of the Muslim Council and other Conservative Muslims for a full inquiry into Islamophobia within the party. Johnson’s remarks comparing Muslim women wearing burqas to “bank robbers” and “letterboxes” have received widespread condemnation, with politicians across all parties demanding that Johnson apologise.

Johnson’s remarks regarding burqas were made on 5 August in a column he writes for The Telegraph, and are a continuation of a theme for the controversial MP. In a previous column for The Spectator he asserted that “the problem is Islam. Islam is the problem” and that Islamophobia “seems a natural reaction”. In another racially charged column he described black people as “flag waving piccaninnies” with “watermelon smiles”.

Khan is Labour MP for Gorton, one of the most racially diverse communities in Greater Manchester, and is well used to battling against the effects of racial division caused by government policy. In his role as Shadow Immigration Minister, he has been working to hold the government to account over the ‘hostile environment’ responsible for the abuse of many from the Windrush generation. In his previous role as an MEP he also worked on the European Islamophobia Report.

Decrying Johnson’s comments as “Islamophobic” in a tweet, Khan then went on to tell The Meteor:

“I think it is disgraceful coming from someone who is a very senior Conservative Party politician, who has been our foreign secretary, who has gone round the world and who has the ambition to be a leader and prime minister of this country. For him to come out with comments like that is just not acceptable.”

Disgraceful and #Islamophobic comments from @BorisJohnson.

Will the @Conservatives now finally accept that their party has a problem with Islamophobia and heed the calls from the @MuslimCouncil @SayeedaWarsi @ConservativeMF and others for a full inquiry?https://t.co/LRTWbINzUW

Khan also explained that he did not think MP’s should be dictating what women should wear: “Whether you wear too much or too little, that’s their business, not your business.”

Another prominent critic of Islamophobia within the Conservative Party is former co-chair of the party Baroness Sayeeda Warsi, who has previously held three ministerial positions. She has been fighting a long standing campaign for an Inquiry into the problem within her party and for greater transparency around the issue. She resigned from her previous role as Minster of State for Faith and Communities due to disagreements with government policy on the Israel-Gaza conflict. Warsi has also criticised Johnson’s recent comments and the party’s wider problems on Twitter:

And on and on it goes ……and still
No enquiry
No action taken against @BobBlackman et al
No publication of how many complaints received
No details of what action action
No process
No engagement
No transparency on how many readmitted to @Conservatives https://t.co/02Zjcgx56D

Khan agrees with Warsi’s claim that Islamophobia within the Conservative Party extends beyond Johnson’s latest comments and supports Warsi’s campaign for an inquiry, saying:

The weight of complaints against Islamophobia in the party is steadily increasing, with the Chairman of the Conservative Muslim Forum (CMF) saying that they are failing to root out Islamophobia, because they do not want to “rock the boat”, and are hoping the issue “will magically go away”. The Muslim Council of Great Britain, along with 11 other UK Muslim councils representing more than 500 mosques, organisations and schools, are also calling for an inquiry into the issue. Khan says that

“This is a huge scale where people are standing up and saying they need to look at this. And if there isn’t a problem, well, if they did hold an inquiry they would find that out. And if it is a problem then at least they will know the scale. I think it is really not acceptable for the Conservative Party to try and kick this into the long grass, when they are the party of government.”

After first failing to ask Boris Johnson to apologise over his remarks, the Prime Minister Theresa May yesterday evening demanded that Johnson apologise. Brandon Lewis MP, current Chairman of the Conservative Party, has also asked for an apology.

Khan says that antisemitism is not just an issue for the Labour party, it is an issue across society, and believes there should be cross-party consensus wherever prejudice raises its ugly head, saying:

“All good politicians irrespective of which party they come from – Greens, Conservatives, Lib Dems, Scottish National Party, all of them – all should line up on this sort of area where there is racism. Wherever it comes from, whatever form it is, we all really need to be striving for a society that has a zero tolerance to racism like this. Making society more healthy, and giving every individual the full potential to contribute. So in all sorts of different ways we should all line up.”