Manchester together: one year on from the arena attack 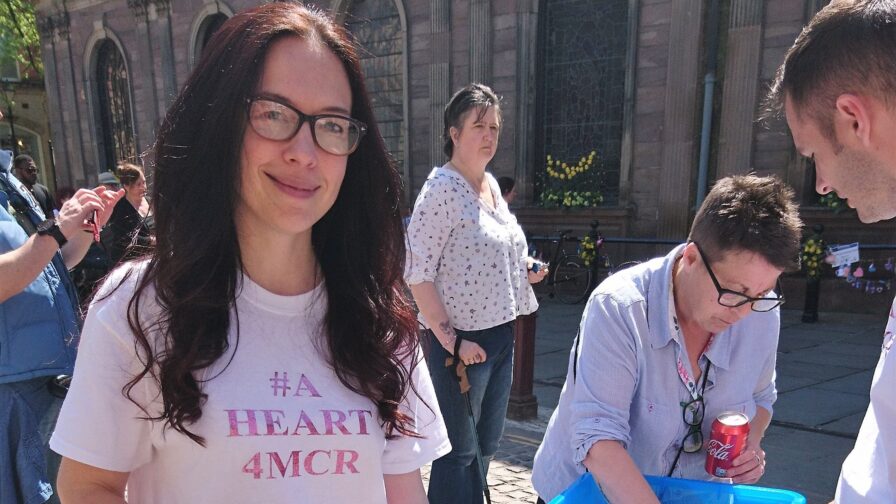 A sunny day in beautiful Manchester. The skies are blue and the sun is shining but the people are downcast and sombre. This is the saddest day that I have ever entered the city. Today marks the one-year anniversary of the bomb explosion at the Ariana Grande concert at the Manchester Arena. 22 people died and hundreds were injured, that doesn’t take into account the thousands of people that were mentally scarred by the event.

Manchester City Council have provided the Trees of Hope trail,  running from Victoria station to St Ann’s square, for people to leave messages of love and support. I have come to see how people have moved on in this past year and how our city of Manchester is helping the mourners. Arriving in the city centre, everywhere I look I see T-shirts with The Manchester Worker Bee, One Love or personalised messages to victims. 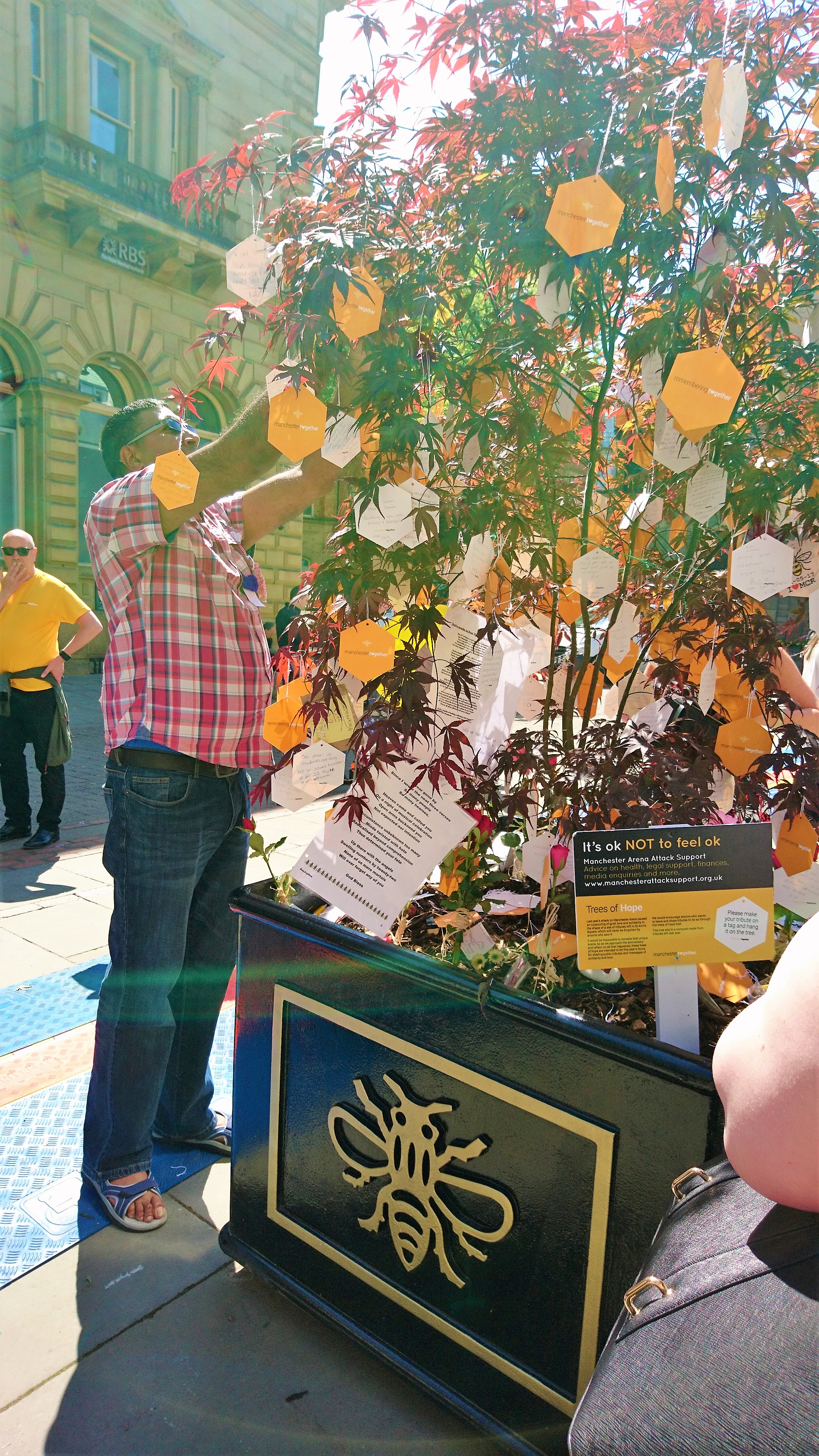 I spoke to a group of young people from Stockport – Ellie, Joria, Meghan and Lydia. Sadly, Lydia had been at the concert last year.  Whilst we were chatting she was visibly upset, but her three friends were very supportive and it was lovely to see. When asked about the anniversary, Lydia said: “I think it’s a positive thing rather than negative. There’s not really much that can be done now.”

I asked them how they felt about the memorial. “It’s nice to have somewhere to come and talk about it all and feel like the community is coming together,” said Meghan. This is really how today feels. Everyone knows why they are here and people are presenting their thoughts on the various slogans on their T-shirts.

Joria points out a message amongst the trees which reads: “it is OK not to be OK.” “This [message] is really important at a time like this,” she says.

Another member of the group, Ellie, commented on the fact that the trees are spaced out enough that people can leave a message in private and take time to think about the victims.

Looking around I see what she means. The trail has a very relaxed nature to it, which may be something to do with the healing aspect of trees. The girls seem a little brighter when we part ways and comment that at least the sun is shining today. I wonder how hard this last year has been for this group of girls, and teenagers in general across the country. Something like this could have a detrimental effect on the mental welfare of everyone involved.

A group of homeless men approach the trees and leave a note saying: “Homeless believe we are strong together.” Until this moment, I have never considered what it must have been like for the homeless community on that night. They would have heard the blast and seen the chaos of the emergency services before most.

One man stops to talk about losing his wife and daughter. They were not victims of the bombing but this communal grief has brought a feeling out in him. He feels like he wants to share his story with the people of his city. Another man walks past and shouts over to us: “I’ve got the same emotions today as I had this time last year.” This anniversary has brought the attack back into sharp focus. I see people leaving messages on the trees and walking away in tears. Time is a great healer and our city is still healing.

I speak to an older couple, Mr & Mrs McIntyre from Urmston, who have lived in Manchester their whole lives. Mr MacIntyre proudly wears a T-shirt with the mosaic of the Manchester Bee.
“[It’s] amazing and fills me up – brings it all back…The church is amazing. People care, don’t they?” he says. They both well up.

“We wrote our message: ‘No Words, Stay Strong’. Our family in Brighton asked us to leave a message for them too.” They tell me how they came into the city after the 1996 bombing and nothing like this was done.

When I asked them if they were affected by the bombing directly, Mr MacIntyre tells me: “the little girl next door was at the concert but dashed out before the end, as she was staying at a friend’s. They heard the ‘thump’ from the tram.” Mrs MacIntyre adds that she has never spoken about the night.

A dad scoots passed on a scooter with a little boy. Mike works in the city centre and remembers entering the city the day after the attack. He is wearing a Manchester Bee T-shirt, yellow and black striped socks and has three tattoos, each a tribute to the Arena attack. He tells me how he got the Manchester Bee tattoo directly after the attack, and then a second to mark the first anniversary.

His third tattoo is a beautifully symbolic umbrella that has 22 red raindrops falling from it to mark the 22 dead.  He says: “when it comes to things like this, we all unite together with strength and show respect to the lives of the young and old people that died.”

When I asked him about the Trees of Hope, he said: “it’s just a poignant moment, it’s touching. I’m amazed by how busy it is.” 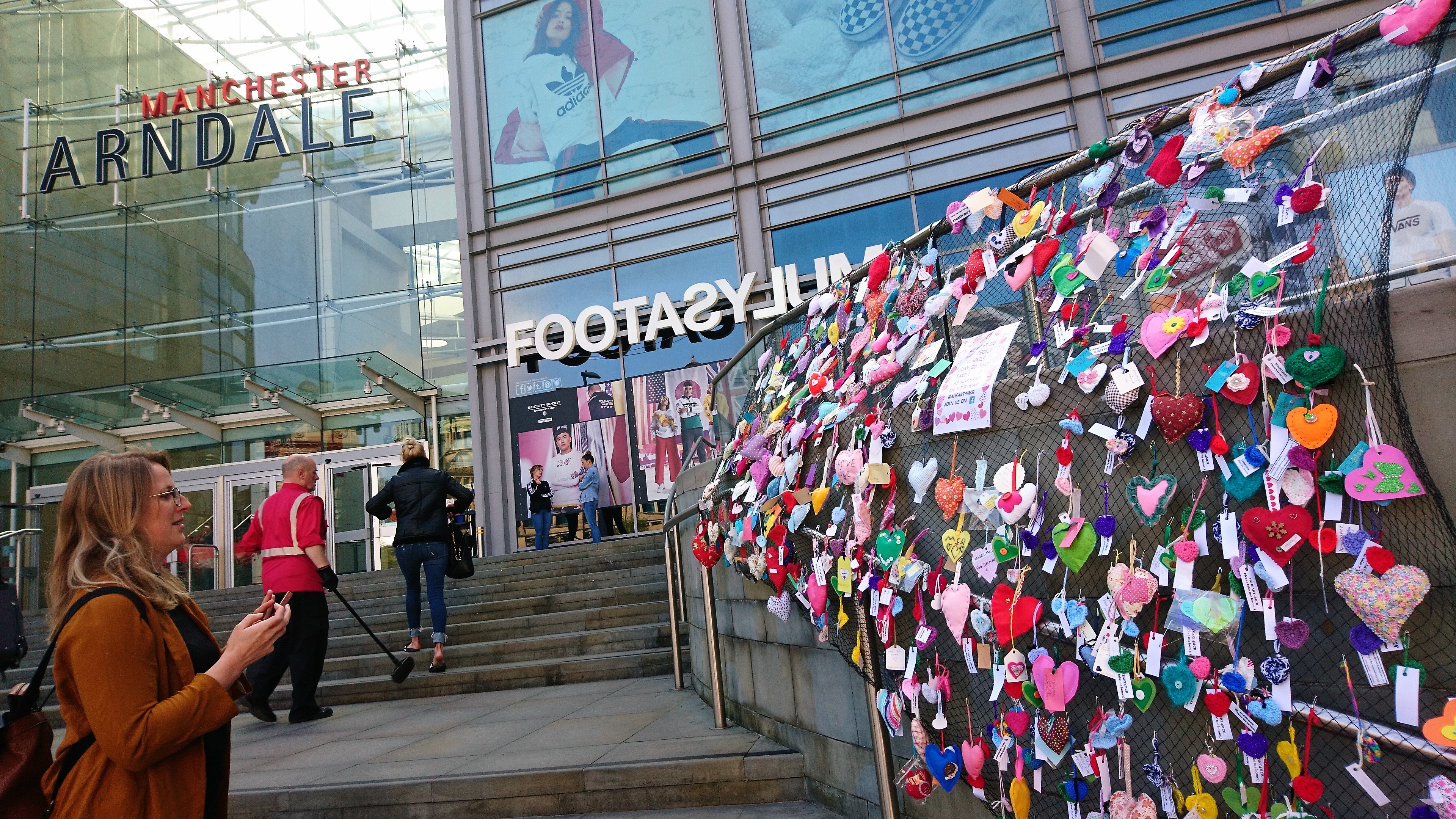 Along with the council provisions, some local people have decided to leave their own tributes. I spoke to Beth from Marple, who is is a crafter by trade, and told me her story about how when the attack happened, she decided that she needed to do something.

“After what happened last year, like so many others, I was in desperate need to do something and I didn’t know what. I made one heart to put in my window, put the picture on Facebook and had such an overwhelming response that I thought, ‘Ooh, I could do something with this’. I set up the group #aheartformanchester. Within three days the group grew to 5000 people and within nine days we had 27,000 hearts from around the world. As far as America, Australia, New Zealand. They came from every continent.” 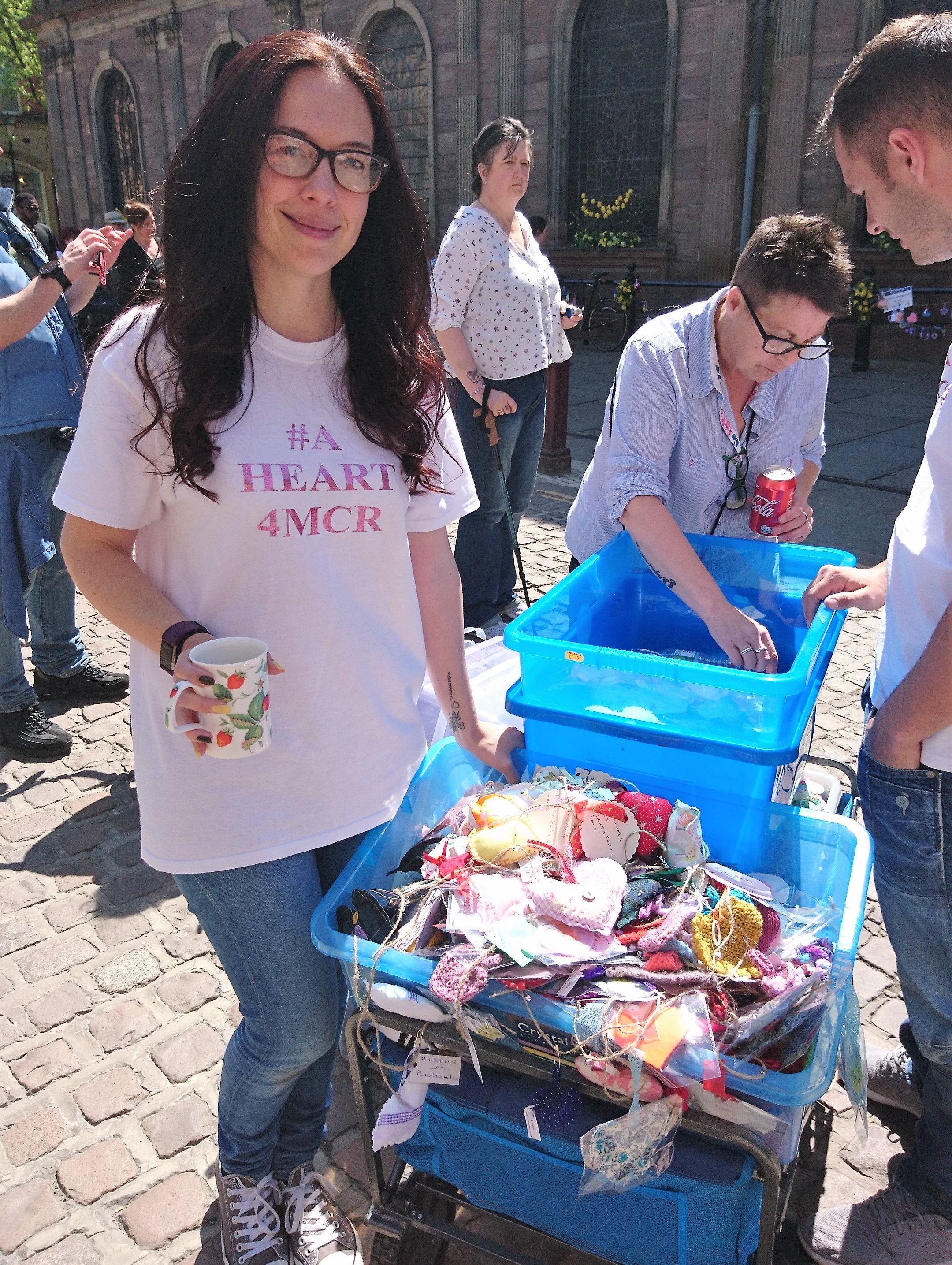 Beth and her small army of helpers took the hearts into the city centre with the intention to make people smile. Every passerby was encouraged to take one home with them. “The response was amazing – all social media went crazy. We trended on Twitter at number 5, it was fantastic.”

Beth is back with more hearts today and has her family and friends around her, who all look so proud and happy to be doing something to help. They have made some special hearts to give to the police officers on duty today.

“We decided to mark the anniversary in the same way. In January I put the message out that we would mark the first anniversary. We received approximately 7,600 hearts from all over the world. We’ve followed the same trail as the Trees of Hope and are asking people to take a heart home with them to remember. The response today has been amazing, people are really touched. We’ve had strangers coming and giving us hugs, chatting to us. People are getting emotional. It’s great to see people looking at them and smiling.”

Today has been a truly touching day to be a resident of Manchester.  While thousands of people came together to remember an event that has rocked the core of our city, it was both quiet and peaceful. It’s fascinating to see how Manchester as a whole has reacted and how people not directly affected have dealt with it, from making thousands of hearts to having bees tattooed onto them. It’s evident that Manchester has taken this attack personally and wants to show a united front. People from all walks of life stood together today, sharing a memory that has made us stronger as a city. Witnessing their tears and solidarity has made me proud to be an honorary Manc.