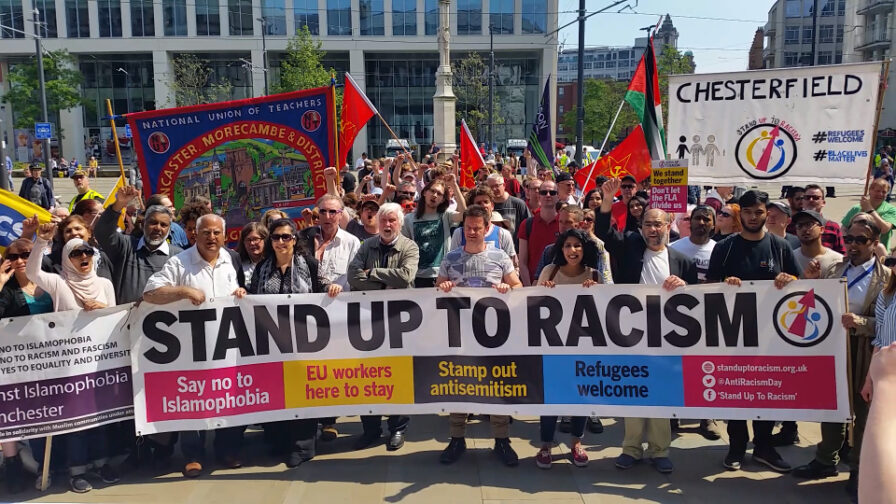 On the eve of the Manchester Arena attack anniversary Stand Up To Racism (SUTR) supporters opposed those elements of hate that exist within our society, personified in this case by the Football Lads’ Alliance (FLA) presence in Castlefield. The FLA, a far-right political organisation, announced a rally and march through central Manchester to occur just three days before the anniversary of the arena attack, which tragically killed 22 and wounded many more. Dan Hett, brother of Martyn Hett who was one of the 22 killed in the Arena, condemned the move describing it as:

“…hijacking what happened here a year ago, in the most callous possible way, and I am proudly standing opposed to them… the FLA isn’t just a group of football fans, its a really, really badly hidden fascist organisation.”

Spirits among the SUTR counter-demonstration which assembled in St Peter’s Square, on Saturday 19 May, were high. But there was a palpable tension about the FLA’s march, and details were sketchy. A police officer we spoke to in the Square said that he wasn’t aware of any planned FLA marches, only a static gathering at Castlefield Bowl, conflicting with information originating from the FLA that not only did they have a march planned, but that they had liaised with Greater Manchester Police (GMP) in agreeing the route.

GMP’s official statement prior to the event referred only to “arena anniversary events”, neglecting to make any specific reference to the FLA. The GMP Press Office and social media content referred all enquiries to this statement. However, in a leaflet handed out to FLA supporters during the event, Superintendent Chris Hill stated that it had been agreed, “with representatives of the Football Lads Alliance” that “today’s rally will be based solely in the Castlefield Bowl area and there is no plan in place for attendees to march to any other area in Manchester city centre”.

A reporter covering the FLA side said that there was frustration and disappointment expressed amongst FLA supporters both about the demonstration’s confinement to Castlefield Bowl, and about the poor turnout, which a GMP Public Relations Team officer numbered at approximately 400. After the event had ended, a source from within the FLA camp told me that the agreements made with GMP regarding plans for the march had been “reneged at the last minute”.

The counter demonstration was significantly better attended than the FLA event. Trade unions (including Unite, Unison and the GMB), anti-racism groups, actvists and the general public turned out from all over the country to create a diverse crowd, symbolising the vibrancy many in the city hold dear. Diverse, too, was the range of speakers assembled in St. Peter’s Square. Dan Hett took to the stage to criticise the FLA for “shamelessly hijacking the anniversary of the attack to peddle their racist, Islamaphobic views”, telling the crowd that he was “beyond proud to march in solidarity with so many in Manchester’ and to ‘drive the FLA out of town”.

Speakers elaborated on how the FLA operate, their use of secret Facebook groups to communicate and organize using abusive and inflammatory language; and that there has been a recent push to recruit women and families. Islamophobia, according to a speaker from the Fire Brigades Union, is the FLA’s “main recruitment driver”, referring to links to Tommy Robinson and the English Defence League (EDL). Antifascists at the counter demonstration reported seeing known EDL members getting on the same train as them in Newcastle.

For many, the SUTR demonstration was also a chance to engage in broader discussions about the current state of affairs regarding race and identity in politics today. Speakers talked passionately about how the strong-arm anti-migrant policies and rhetoric of the current government have played into the hands of xenophobes, giving them renewed vigour. Several mentioned the recent Windrush scandal and recounted personal stories of its devastating impacts on close family members.

Wayman Bennett, the national secretary of SUTR, told the crowd how his mother and uncle were invited to the UK by the British government from the Caribbean, arriving as British citizens to be met with met with, “no blacks, no dogs, no Irish” signs in windows. After a lifetime of living and working in the UK, their legitimacy was brought into question by the Tory government who, according to Bennett, is pandering to the far-right and prioritising deportation figures over people’s lives and wellbeing. “The Government is playing with fire’, said Bennett, with a timely reminder to the crowd that “the railways and canals around Manchester were built by immigrants”.

Marching past the old Hacienda and Deansgate locks, the counter-demonstration moved to Castlefield Bowl, where the FLA was assembled. Anti-fascist activists and the attendees of the thwarted FLA march were separated only by two police lines at both sides of a railway bridge arch.

The dark side of the pitch

John Meighan, the FLA’s founder and a known ex-football hooligan has claimed emphatically that both he and the FLA are against violence and extremism, but both the speakers at the FLA’s event and literature distributed on the day from several far-right groups strongly suggests otherwise.

Vinnie Sullivan from The Reality Report, a far-right media group, was first up to speak. Sullivan and three of his henchmen on stage have previously displayed their propensity for violence when they were videoed instigating a confrontation and brawl against anti-fascists campaigners in London, who were protesting against a Generation Identity conference. Sullivan came onto the stage with his arm in the air saying ”FLA all the way” and stated his goals, with a common anti-left wing theme to other speakers, were to tackle “Antifa” and the “anarcho-communist regime”.

Generation Identity (GI) flyers distributed at the FLA event describe them as a “European patriotic youth movement” which is “concerned with the preservation of the ethno-cultural identity which has characterised our Island home and Europe for thousands of years”. They also predicted a “complete destruction of European Societies within just a few decades if no counter-measures were taken”, echoing Enoch Powell’s Rivers of Blood speech. The thinly veiled Islamophia and racism inherent in GI literature is complemented by imagery which shares the distinctive colour scheme of the anarcho-capitalist flag, commonly seen at alt-right demos in America and highly visible in alt-right/far-right/neo-nazi online discussion groups. GI’s use of libertarian concern as justification for its authoritarian stance, alongside its chosen imagery, reveals worrying parallels with the American alt-right. The British right wing press are also giving GI uncritical coverage, with a puff piece in The Sunday Times headlined ‘Heil hipsters’, focussing on GI’s clothes and fashion sense rather than digging into their white nationalist and rascist agenda.

Flyers handed out at the event by a group calling itself The British Voice, revealed a direct link between attendees at the FLA rally and established far-right groups. The British Voice is a splinter group of the British National Party, a far-right and fascist political party that had its UK heyday in the 2000s, notoriously led by Nick Griffin before his expulsion. Interestingly its flyer features no website, only a membership form, a PO Box in Stoke-on-Trent and two phone numbers.

The first number didn’t work, but the second did. Michael Whitby was enjoying some time away in a holiday camp somewhere in Wales when I spoke to him. He expressed his discontent with the turn-out on the day, citing a lack of leadership within the far-right. Whitby, who is chairman of The British Voice, and once stood for the Mayoral elections in Liverpool as a BNP candidate, referred to “invaders” and “indigenous masters” over the phone.

Whitby’s former BNP membership was revealed while discussing the fate of Paul Golding – leader of Britain First – who is currently serving a prison sentence for breaching a court order telling him not to enter mosques. Whitby knows Golding personally and described him as “arrogant”. When asked about why his organization has no website, he said that their website had been “taken down” because “they” were “trying to make life difficult for us”.

Trevor Coult, an army veteran who appeared with a crest of medals, was the final speaker of the day, representing the Democrats and Veterans Party (DVP) on stage. The DVP is a UKIP splinter group whose website underlines its commitment to the “defence of the realm” and strict adherence to the “rule of law”. Its leader, John Rees-Evans, backed a “repatriation” scheme designed by the British National Party. Coult was critical of representative democracy in the UK and said:

“What we want to do is replace our ministers with seasoned veterans, who have not only served their country, but have sacrificed for their country”.

He didn’t say much more as he was interrupted by the Stand Up To Racism protest arriving at the far end of the bowl, behind a police cordon, chanting loudly “the FLA has got to go”. Following that it wasn’t long before disappointed FLA supporters had retreated – defeated – into pubs around Manchester.

While marches can be contained and websites removed, the threat of fascism cannot be underestimated. Movements are growing all over the world and fascism today is manifesting itself in a way that is distinct from the past. Its scapegoats have changed, as have its tactics. Islamphobia was specifically identified by the day’s anti-fascist speakers as the far-right’s key current recruitment tactic. Nick Griffin – former BNP führer and arguably more of a “traditional” fascist than today’s far right leaders once claimed to have been offered a lot of money by influential American neoconservatives whose agenda was to stir up Islamophobia in western nations.

The fact is Islamophobia, is a very real and growing problem in the West today. Meanwhile, the West has been bombing countries with large Islamic populations for decades, while here in Britain, bombs were authorised to be dropped on Syria without the House of Commons even being asked. When Tony Blair followed George W. Bush into the horror that was the Iraq war, society voiced its opposition and did so in enormous demonstrations. In the case of Syria, one has to wonder if Islamophobia, and the constant reminder of terror threat levels in the UK, has played a role in keeping a lid on the same kind of mass public discontent.

On the day, the fascists were outnumbered by those that are guided by love, in both numbers and in spirit. The solidarity that was displayed by everybody that came together was inspiring. Many of the trades unions were represented, students, activists and workers from all across GM and beyond. It was fantastic to see and to experience, and refreshing when compared with last year when the EDL came to town and antifascists were outnumbered by 5/1.

Fascist movements triumph in times of political, economic and social turmoil, but last Saturday showed that people are committed to seeking alternatives based on love and to seeing past the superficial, hate-inspired rhetoric that has grown out of petty football hooliganism into the “far right street movement”. Hate is for cowards that do not have the courage to fix the problems that exist around them.

The Democratic Football Lads’ Alliance (splinter group of the FLA) is planning another  march in Manchester on Saturday 2 June.

Stand Up To Racism Manchester are holding another counter demonstration to the DFLA march on the 2 June, for further details – click here

Feature Image and in article video and images: The Meteor