Mayoral hustings on the housing crisis in Greater Manchester 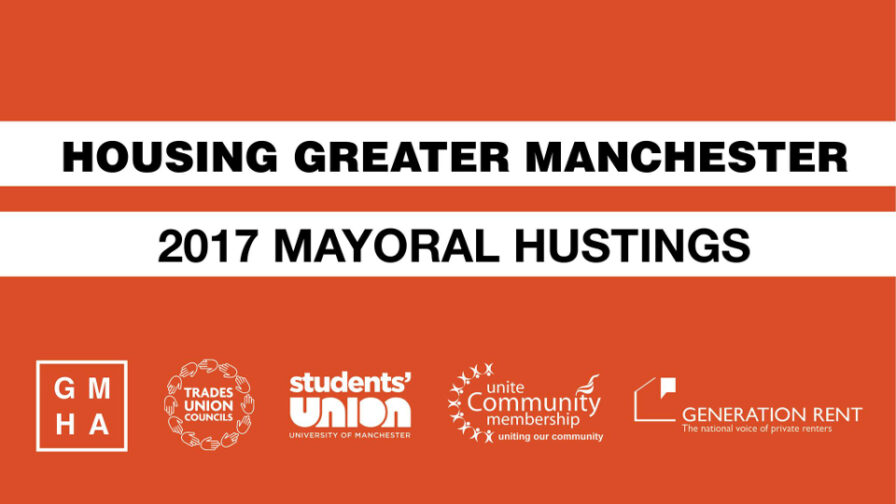 A chance to publicly challenge the mayoral candidates for Greater Manchester on their plans to tackle the housing crisis in the region is being offered at a special hustings at St Philips Chapel, Salford on Monday 3 April.

There are many factors that contribute to the housing crisis, including rising rents/house prices, cuts to local authority budgets, lack of housing stock with not enough being built, selling of council/social housing, cuts to social security, the bedroom tax, increasing levels of homelessness, insecure tenancies, increasingly poor private housing conditions that are detrimental to health and new housing developments leading to gentrification.

Even if you are one of the lucky ones not affected by one of these issues you will no doubt know someone who is. There are a lot of emotive issues involved and scope for a passionate debate between citizens and the candidates on how they will deal with these problems, and overcome the government’s apathy and ineffectual efforts, if they become mayor.

The hustings have come about through a collaboration of socially conscious organisations wanting to alleviate the misery caused, to an increasing number of people, by the housing crisis: Generation Rent, Greater Manchester Housing Action (GMHA), Manchester Trades Union Congress, Greater Manchester Unite Community Branch and the University of Manchester Students Union.

“Greater Manchester is suffering from a housing crisis. Over the last two years social housing stock has disappeared and the construction of new council properties is virtually non-existent. This has forced many residents into private-rented properties that are unregulated and poor conditions are all too common

The incoming metro mayor of Greater Manchester has the opportunity to reverse this trend, say that such conditions are not acceptable in our society and work across the region to work to help solve the crisis.”

The increase of homeless people on our streets is readily visible to anyone who visits Manchester city centre. The 2016 Green Book report by Shelter estimated that there were 3,292 people surviving in Greater Manchester without a permanent home. The report left Manchester with the dubious distinction of being called the ‘North West’s top homelessness hotspot’, with over 2,000 people sleeping rough or in temporary accommodation.

“The people of Greater Manchester are being hit hard by the housing crisis. What do you plan to do about it, particularly in the areas of social housing, private renting and homelessness?”

Free tickets for the mayoral hustings can be booked on the Eventbrite page, click here