Review: Stand Up For The People’s Assembly at Manchester Academy 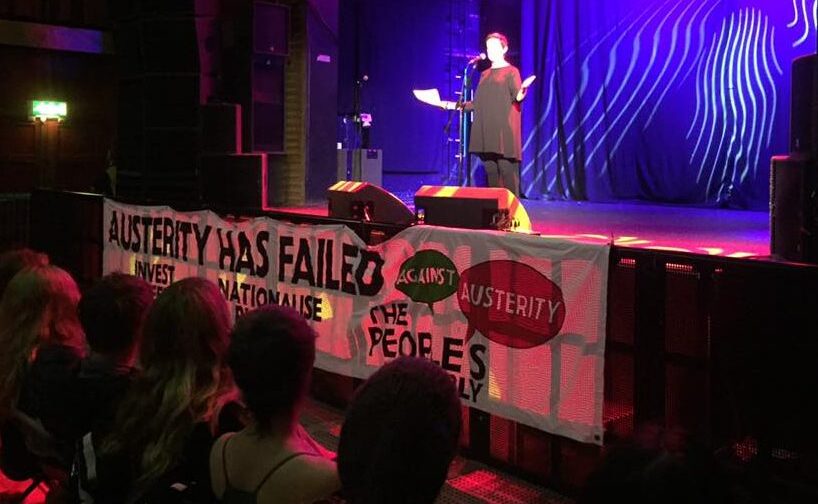 ‘Stand up, that we might’ sang protest singer Grace Petrie. ‘Save tomorrow’ came the refrain from a game crowd at the second annual Stand Up For The People’s Assembly event. The night, organised by Manchester People’s Assembly, saw a host of established performers donate their time to raise money and awareness in the fight against harsh government measures.

In a week where Donald Trump (‘The Orange Bollock’) became the leader of the free world, the event served as a rally around keeping hope, with comedians, poets and musicians taking aim at the issues that continue to concern many on the left. Former Corrie star Julie Hesmondhalgh compered the show, which raised around two thousand pounds.

Veteran musical comedian Steve Gribbin opened the show, firing up the crowd with a series of comedic covers taking shots at everyone from ‘The Donald’ to The Queen, as well as producing an impressive amount of spit after having been forced to mention The Sun (to raucous applause). The show also featured stand-up sets from Tiernan Douieb, host of the Partly Political Podcast, lamented having chosen the worst year possible to have quit drinking and Britain’s Got Talent star Jack Carroll warned of the dangers of trolling yourself. All three punctuated political material with a hearty dose of self-deprecation, which helped to keep the tone light in the face of a disheartening week for the left.

We heard poetry from Matt Abbott, Attila the Stockbroker and Steph Pike. Abbott delivered a heartwarming piece on the high-quality treatment his mother had received from the NHS, as well as a belter about ‘the only pie shop in Wakefield that’s open 10pm-5am’. Attila mused on Asylum-Seeking Daleks and Pike warned of those that would ‘bank all over us’, finishing with a warning to them that ‘we were coming’. All three acts struck a nice balance between showcasing their talents and promoting their causes and it was especially pleasing to see Steph Pike as she is a prominent member of the Manchester People’s Assembly.

The headliner of the night was Canadian-born comedian Tom Stade, who riffed on being called an immigrant for the first time in 15 years of living in the UK (the country that has had ‘more dicks in it than anyone’) and the differences between North American and English culture, specifically the difference between Storage Wars and Storage Hunters. It’s a testament to his skill and experience that he was able to keep the audience onside and get big laughs despite some material that could be considered risqué at an explicitly left wing event. It was surprising to hear a joke about a ‘man-woman’ or the word ‘faggy’ at a People’s Assembly event, but with his energetic, charismatic delivery he was able to avoid any potential awkwardness and send the audience home happy.

Given the quality of the bill, it was a shame to see that the event attracted a smaller crowd than last years Laugh Them Out of Town, which came hot on the heels of a week of protests at the Tory Party conference and Jeremy Corbyn’s election as Labour leader. In a demoralising year for the political left, events like Stand Up For The People’s Assembly remind us of the importance of community. Humour is at the very least, a decent coping strategy, and at best can be a powerful weapon in the fight against dangerous ideologies.

Find out more about the Manchester People’s Assembly here.