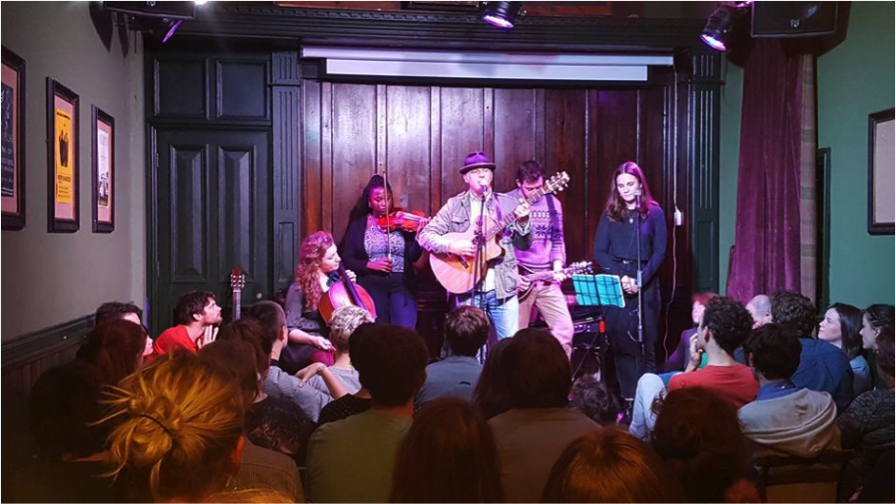 First Draft is a bi-monthly cabaret night in Manchester, normally based at the Castle Hotel on Oldham Street. The night revolves around a chosen theme and performers are given the freedom to interpret it however they want. The only condition is that they perform something entirely new.

At last Monday’s event, the variety of performers First Draft attracts was clear. There were twelve acts performing a variety of music, fiction, poetry, stand-up, musical comedy and creative non-fiction.

‘Crush’, the prompt at the most recent night on the 17th October, was chosen by writer Marli Roode, who began the performances by reading Richard Siken’s poem A Primer for the Small Weird Loves before performing her own piece, a reflection on the slow end of a relationship.  A lyrical, gripping start to the night, it was only one of the various unique takes on the theme.

The room was packed. People who couldn’t get seats stood and the audience spilled out into the corridor of the Castle Hotel. Abi Hynes, one of the founders of First Draft, told The Meteor that there were lots of new faces in the audience.

‘We are still get new people turning up at every event. First Draft is four years old but it hasn’t stopped evolving. I founded it with Sonia Jalaly, who is an actor and writer now. At the time we were both doing theatre masters’ in Manchester. We were writing and performing but neither of us felt ready for a full audience. Originally First Draft was just a night for mates, then we started connecting with other nights on the circuit and it grew. Sonia’s moved to London and now it’s run by me, Harry Jelley and Andrew Williamson.’

‘The Manchester arts scene is brilliant; we’ve found our place here. There are so many new nights all the time and the unusual thing is they often survive. In other places, they might be seen as competition but here people are really supportive – and it helps the whole scene grow.

We pride ourselves on getting lots of first time performers at First Draft. They can experiment and come with something that is not polished or finished. We support the performers and we’ve seen people go on to do brilliant things – people who are now doing the comedy circuit or publishing their writing.

Even though it is a local scene and most of our performers are from Manchester, there is a real mix. There’s no requirement for performers to be local or an exclusive political Manchester identity – we are open to diversity.”

The next First Draft, a Halloween special: ‘When the darkness knocks’, is at Chetham’s Library on the 31st October but is already sold out. However, some tickets may become available from returns, so look out for them on First Draft’s website and facebook.

After that they will be back in Castle Hotel in December, the theme will be announced online soon.