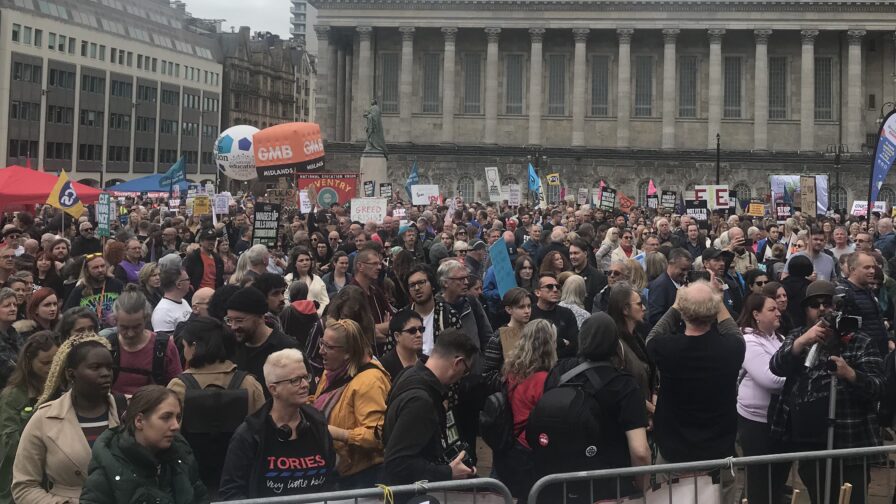 It feels like a lifetime ago now, but it's only three weeks since the Conservative Party Conference. People from Manchester travelled down to Birmingham with The People's Assembly to protest the event.

Thousands of protesters gathered in Birmingham on Sunday 2 October for a demonstration against the Tories during their annual conference, organised by The People’s Assembly. It was certainly eventful and clearly showed the level of opposition amongst ordinary people to the Tories.

Passions rose when the Tory politician, Jacob Rees-Mogg, decided he’d walk through  the square where protesters were gathering. He didn’t have to walk this way so it was clearly an act of provocation and arrogance. He was quickly spotted and subjected to loud boos, chants and jeers and the police had to escort him away.

There was then a great rally with fantastic speakers, poets and performers. All stressed the importance of ordinary people and workers supporting all the strikes, protests and demonstrations, getting involved, getting organised, and coming together collectively in unity and solidarity to build the movement against the Tories. Mick Lynch (General Secretary of the RMT) spoke last. As many know, Mick has spoken well, articulately and knowledgeably when confronted by mainstream media journalists about the rail worker strikes. He didn’t disappoint at this demonstration either. Mick’s speech and all the speeches were posted to The People’s Assembly Facebook page and can be found here: https://fb.watch/g9mJNAag60/

Next was a march around Birmingham city centre and to the Tory conference for a ‘walk of sound’ protest. This was vocal, noisy, and very clearly anti-Tory. There was much interest and support for marchers. With a Tory government more interested in making the wealthy richer, Birmingham, like most of Britain, faces an uncertain and difficult winter, with the growing cost-of-living crisis, rising inflation, stagnating wages, soaring energy bills and much more.

By the time marchers got to the Tory conference, there was no stopping them. They breached the police cordon and got right next to the conference. Surprisingly, the police let Tory delegates out next to protesters, which led to loud chants of ‘shame on you’ and heckles. Despite the passionate opposition many of the protesters felt towards the Tories, none got physical with the Tories and it was interesting to see Tory delegates subjected to a verbal hard time when often it’s them giving ordinary people a hard time.

See here for a short video of the chants: https://fb.watch/g9mzi_sf02/

So all in all a very successful demonstration. But we need more of this fight back and it’s crucial we keep up the pressure in every way we can.

The People’s Assembly have a National Demonstration on Saturday 5 November 2022 in London. We need to make this huge and really show the Tories and the ruling class that the working class are back (to quote Mick Lynch)! See the Peoples Assembly website for details of the demonstration and low cost coaches.

Also if you want to become a member of the People’s Assembly, find a local group here.

Convenor of The People’s Assembly Manchester