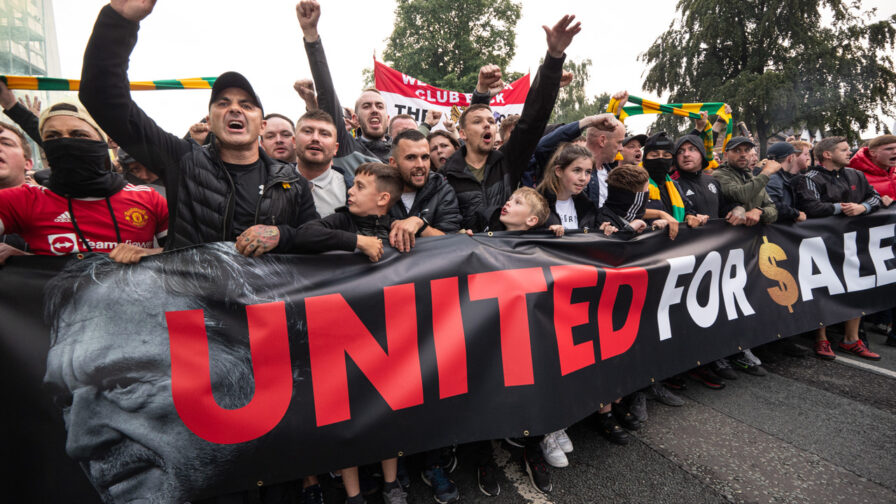 Since the controversial American owners took control of the club between 2003 and 2005, Manchester United has gone from one of the most successful football clubs in the world, winning an array of silverware with Sir Alex Ferguson, to an ‘also-ran’ in the Premier League. Although, it must be noted that Sir Alex did not leave the management position at Old Trafford until the end of the 2012/13 campaign, when he won his, and currently United’s, last Premiership title.

Fans assembled on Monday evening at the Tollgate pub, in Old Trafford, before the planned protest march to the stadium. They sang songs to honour players such as Jaap Stam, a United hero from the late 1990s, like an aural comfort blanket, to remember happier times when their team dominated the Premier League.

One such fan, Pete Walton from Northwich wearing a green and gold scarf on top of his Manchester United strip, had supported the club for 48 years since he was aged 7. He lamented the below-par fortunes of the club in recent years.

“We want the Glazers out as they run the club poorly. They don’t invest any money in the transfer market, they just take money out. It’s disappointing how the Club has gone down the drain with them. The transfer prices of players has just gone overboard, it’s ridiculous, there is just too much money involved and the fans have been forgotten”.

The accusation of underspend on transfers by the Glazers is often heard from the United faithful, but in fact, across the 17 years of the Glazers’ tenure, this spend has averaged at £92 million per season. A figure only beaten by their arch rivals, Manchester City, in Premiership history.

Perhaps this points to a more profound reason for the fans discontentment as expressed by United fan Mark McEly from Failsworth.

“What people forget is that the Glazers tried to steal football away from the people. You look at the proposed European Super League which involved the Glazers. United won’t change until the Glazers get out. It’s not the money in the game, it’s the money being taken out of the game. Our stadium used to be one of the best in the world, now its leaking. The thing is if they take the shackles off United we can invest our money into the transfer market”.

This sense of a lack of supporter input and control is echoed across the fans who have adopted the green and gold scarves of Newton Heath, harking back to the club founded in 1878 that then became Manchester United in 1902. The protest march itself was led by The 1958, a recently-formed fan group, whose name pays homage to the players killed in the Munich air disaster of that year. It’s this sense of a past community spirit lost within Manchester United which appears to propagate the disquiet amongst fans.

Joy Bell, who describes herself as a ‘neutral fan’, echoes this intangible demise at the Football Club,

“Even a neutral has to admit this is a great team. But it’s been destroyed. If you bring in money you can attract great players but it’s whatever is at the heart of the team that is important. This is what is so sad really”.

Perhaps then the fans identify their club’s detachment from the supporters with their own more widespread feeling of disconnect in their daily lives. With the uncertainty of gig economy work, political disenchantment and a growing wealth inequality permeating throughout the modern UK, this feeling of impotency is understandable.

It’s a salient fact that the majority of the fans of the two teams that played on Monday have more in common, both in economic circumstance and geographical location, than the billionaire owners of both clubs, or indeed the players that play for them. The disastrous attempt to form a European Super League (ESL), in April 2021, shows how far the top flight football elites have drifted from their fanbase and equally how the fans when pushed too far can mobilise to vent their anger.

The ESL however, reached an advanced stage without any supporter consultation despite the Football Supporters’ Association (FSA) being formed in 2002. The FSA group, with cross-party support, has helped establish more than 140 supporter trusts aiming for greater accountability and to strengthen the fans’ influence in the running of clubs.

Dissociation and exclusion from perceived societal control, be it at a football club, in the workplace, in political choice or a person’s environmental and economic circumstances, by the dominating elites, can surely only lead to grievance. The exacerbation of such grievance whether at a football match or further afield, by the mainstream media, has been linked to unrest and violence in society.

If these grievances and their negative impacts are not addressed, and the populace feel excluded from the decision making, the looming economic crisis and climate crisis promise to bring much greater civil disruption in the UK as a whole than has been witnessed on Monday at Old Trafford.

The disquiet at Manchester United was dispelled, temporarily, with a 2-1 win against their old foes Liverpool. However, the more profound problems facing Manchester United and the UK going forward will require more inclusive consideration and a dramatic change in leadership direction.

For the Glazers to now achieve this cohesion with Manchester United fans seems a sisyphean task. The new Tory leader, and hence prime minister, by Christmas, will seemingly also face such insurmountable odds to maintain the support of the UK public without a dramatic shift in policy.