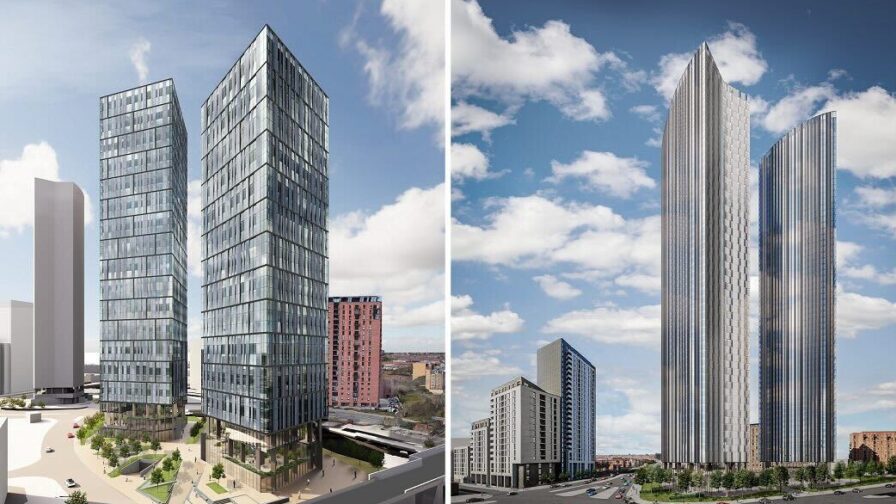 A four-tower high rise development, valued at over £741 million is set to go before Manchester’s Planning Committee today, with housing campaigners calling for it to be rejected as it fails to address the ‘out of control’ housing crisis in the city.

Trinity Islands is a huge residential development proposed for the Deansgate ward of Manchester City centre, set to go before todays Planning Committee. The proposal consists of four towers ranging from 39 to 60 storeys high containing a total of 1,950 apartments is valued at £741 million.

The site has become a centre of controversy with one housing activist group calling on council Leader Bev Craig to reject the proposal that promises just £106,000 for affordable housing. Alongside this smaller fee a contribution of £1.5 million is proposed for education provision at another nearby development.

“We cannot allow skyscrapers with a value approaching a billion pounds to be given planning permission without a significant financial contribution toward addressing the housing crisis.”

The proposal is split across two sites situated on the banks of the River Irwell and on either side of the city’s ring road Trinity Way. The proposed development sits within the Castlefield conservation area, less than 200 metres from the Grade I listed Liverpool Road Station and is nearby to multiple Grade II listed elements around the Castlefield Basin.

Trinity Islands includes a 566-car subterranean parking facility on the site which is also in anAir Quality Management Area, and in a Flood Zone 2 designation, due to the nearby River Irwell. The proposal boasts of a 100% provision for residents cycle storage and 1.29 hectares of public realm.

Details from a Viability Assessment seen by The Meteor outline Renaker’s projected profits at £89.3 million. The document states this margin, a figure of 12%, is too low to support any further affordable housing contribution against what it claims is an industry standard of “18-20%”.

The document further outlines how Renaker’s £10.2 million investment in public landscaping, around the base of each tower and the riverside, is a factor against providing further funds for affordable housing.

Developer Renaker has previous experience of pushing through large scale developments in the city. In 2020 it received approval for two 52 storey residential skyscrapers between Deansgate and Mancunian way, valued at £331 million. Similarly the development contained no affordable housing and made a minor contribution to education provision of £1.75 million despite a projecting profits over 12% and £37 million in cash-terms.

The Trinity Islands site was subject to a similar proposal from developer Manchester Quays approved in 2017, which also included no affordable housing. However the proposal was not carried forward and the land was sold to Renaker in 2018. The new plans feature 560 more flats than the 2017 proposal.

The proposal up before the planning scrutiny committee comes hot on the heels of last weeks angry scenes in Manchester’s Children & Young People Scrutiny Committee which saw a report on the thousands of homeless families sleeping in B&Bs or dispersed far from where they lived in other forms of temporary accommodation.

In January The Meteor revealed that over 3,800 households were living in temporary accommodation across Greater Manchester in 2021, a huge increase of 726% over the last decade.

Saad Omar Abdullatif, a councillor for the central Ardwick Ward highlighted that for many families rising rents were increasingly “no longer viable to manage” and “that actually families are being completely priced out of the area even when they can afford relatively significant rental payments,”.

“It is clear to Mancunians, including Labour councillors, that the city is at a crossroads.“

‘We have consistently warned for over five years now that the real estate boom in the city centre is fuelling a housing crisis. The Council has allowed developers to make soaring profits without any contributions to affordable or social housing – certainty not the 20% set out in the local planning guidance.

“To carry on now despite all the evidence means there is no turning back for Manchester. The housing crisis is out of control, now is the time to travel down a different path.“